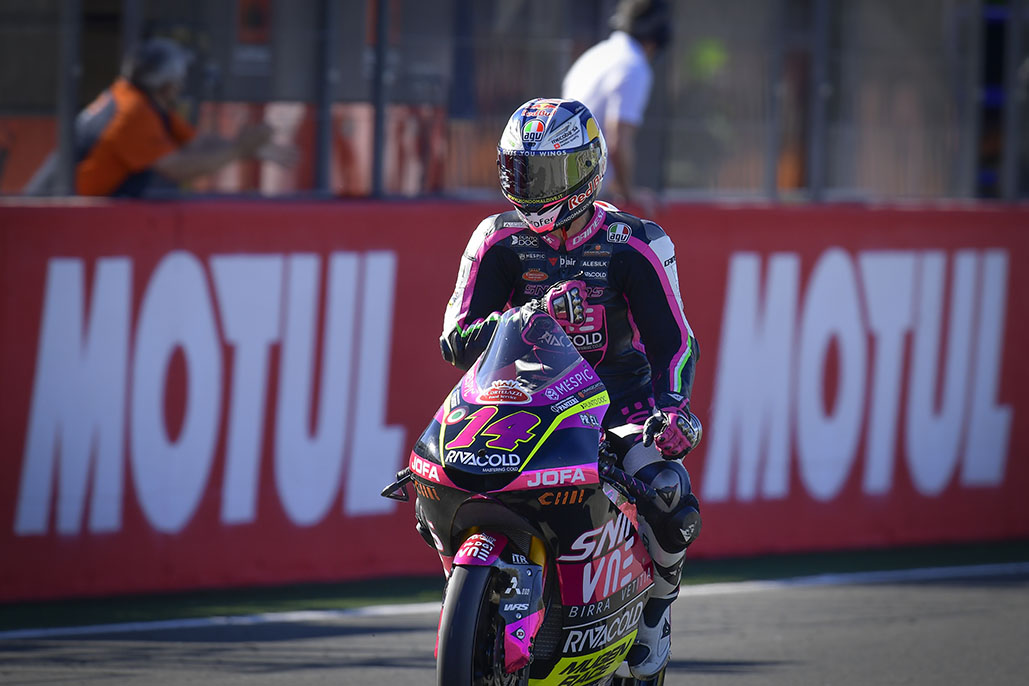 And then there were three: the Italian takes victory to stay in contention and become the 25th Grand Prix winner in 2020 as Arenas takes fourth and Ogura eighth in a tense contest in Valencia.

Tony Arbolino (Rivacold Snipers Team) took a stunning first win of the season in the Gran Premio Motul de la Comunitat Valenciana, clawing back a deficit to Raul Fernandez (Red Bull KTM Ajo) to take 25 valuable points that see him head into the season finale just 11 off the top and bringing the grand total of different 2020 winners across all classes to 25 – equalling the record set in 2016. Sergio Garcia (Estrella Galicia 0,0) won the duel for second against Fernandez, with the Red Bull KTM Ajo rider forced to settle for third. Championship leader Albert Arenas (Gaviota Aspar Team) took fourth and extended his lead to eight points ahead of eighth-place finisher Ai Ogura (Honda Team Asia) as the lightweight class title continues to walk a tightrope.

Kaito Toba (Red Bull KTM Ajo) took the holeshot from second on the grid, with Binder slotting into second from pole in a Red Bull KTM Ajo sandwich as Fernandez held third. Arenas got away well into fifth, with Ogura losing a little ground on the first lap but nothing too serious. Garcia, meanwhile, had gained in a big way; the Spaniard’s charge from P17 on the grid well underway.

The first shot of drama came at the front from Toba and Tatsuki Suzuki (SIC58 Squadra Corse) as the Red Bull KTM Ajo rider highsided and his compatriot was unable to avoid the incident. Once again, that left Fernandez with a small gap out front – just as he enjoyed in the Europe GP.

The Spaniard kept the hammer down alone in some free air as the battle raged behind, a classic Moto3™ freight train forming in the fight for second. Not long after there was more drama and the official end to a Championship charge for one contender too as Celestino Vietti (Sky Racing Team VR46) crashed out; able to rejoin but 2020 title hopes gone.

At the front, Fernandez rode on as Tony Arbolino (Rivacold Snipers Team) held station at the front of the chasing group, with Arenas still a few places above Ogura in the close second group as the Japanese rider remained tagged onto the back of it. Little by little, however, that second group started to split – leaving Ogura in a three-way battle with Jaume Masia (Leopard Racing) and Andrea Migno (Sky Racing Team VR46), and Arenas still well within the five-rider fight for the podium up the road…

Bit by bit, the gap to Fernandez was coming down as Arbolino chipped away, shadowed by Garcia. The gap from them back to Arenas, Binder and Deniz Öncü (Red Bull KTM Ajo) had grown too, and the Ogura-Migno-Masia fight had dropped well off. That left three small groups behind Fernandez, but soon the Spaniard’s gap at the front was down to less than half a second – and not long after it was down to zero.

Fernandez vs Arbolino vs Garcia was now the fight to decide the podium, with Arenas-Öncü-Binder the triple threat waiting in the wings.

After a Garcia-Arbolino duel, the Italian was able to secure second for long enough to set up a move on Fernandez, and he struck on the penultimate lap into Turn 1. The hammer was then well and truly down for Arbolino, and the gap started to increase as the final lap got underway, the Italian focused razor sharp on his first win of the year…

Behind him, Fernandez vs Garcia raged on, but this time it was the Estrella Galicia 0,0 rider who came out on top, defending at the maximum around the final corner to secure second and a second podium in a row. Just behind it got close too, with Arenas fending off Binder in a similarly tense last lap, the Spaniard able to take fourth by just over a tenth. Öncü was forced to settle for sixth, but it was a stellar race from the Turk.

The pivotal battle for seventh went quite literally to the line. Migno was able to stay just ahead for P7, but Ogura and Masia were absolutely side-by-side in a genuine photo finish. The Japanese rider took what could be a crucial extra position as he stayed ahead for P8 though, and he’s now eight points off Arenas heading into Portugal.

Jeremy Alcoba (Kömmerling Gresini Moto3) won a duel for tenth ahead of John McPhee (Petronas Sprinta Racing), and that was enough to secure the Spaniard Rookie of the Year in 2020 after an impressive year fighting at the front.

There was a small gap back to Romano Fenati (Sterilgarda Max Racing Team) in P12, ahead of Niccolo Antonelli (SIC58 Squadra Corse), Stefano Nepa (Gaviota Aspar Team) and Ryusei Yamanaka (Estrella Galicia 0,0) as they completed the points.

And then there were three: Arenas heads for the Algarve eight points clear of Ogura, with Arbolino now 11 down and suddenly within genuine reach of the crown. Portugal promises another stunning showdown, with a Champion sure to be crowned – but who? We’ll find out next weekend!

Tony Arbolino: “My plan was always to win, from being young I’m like that I just want to win, win every race, that’s always what I have in my mind. It’s a fantastic day, I said I wanted to win a race in 2020 in this category before I leave, I’m so happy, we worked so much, trust me, all day and before going to sleep always thinking about that. I feel good, now… I’m so proud!”