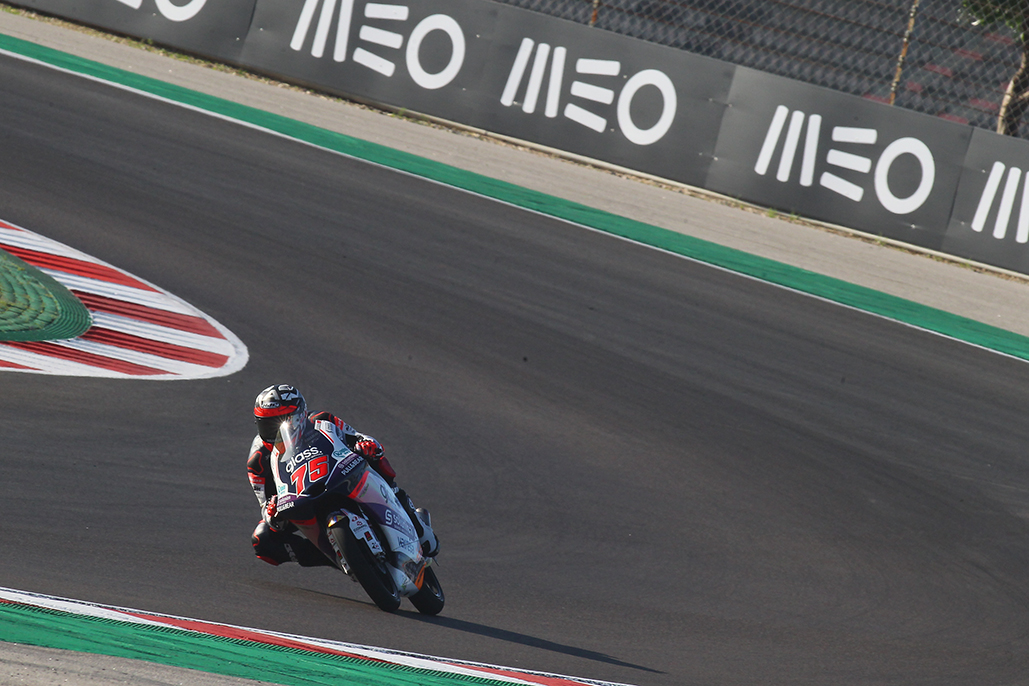 The Championship leader also leads the timesheets as action opens on the Algarve, with Arbolino eighth and Ogura ninth.

FP1
Moto3™ were the first machines of the day to test out the stunning Autodromo Internacional do Algarve, and in FP1 it was Jaume Masia (Leopard Racing) out the blocks quickest. The Spaniard set a 1:48.896 to finish 0.158 seconds ahead of Romano Fenati (Sterilgarda Max Racing Team), with Championship leader Arenas completing the top three as he began the day with some promising pace. Masia crashed at Turn 14, and Fenati at the final corner.

Fenati had been 1.2 seconds quicker than his competitors with just over 10 minutes to go, before that final corner get-off, but Masia hit back to go quickest. Fenati nevertheless improved on his last lap to get within two tenths, however.

Arbolino began his day in P11, eight tenths off Masia, whereas Ogura ended the opening Portimao session in P26, 1.8 seconds off P1.

FP2
All 31 lightweight class riders were able to improve thanks to another extended session. To show quite how much they improved, FP1 pacesetter Jaume Masia slipped back down to fifth despite going four tenths of a second quicker. The speed found by everyone in the field guarantees the FP2 timesheets are the same as the combined timesheets, with Arenas finding a second to take to the top – the first Moto3™ rider to set a sub 1:48 lap around the Autodromo Internacional do Algarve.

Red Bull KTM Ajo’s Raul Fernandez ends the day fourth on the timesheets after giving younger brother Adrian Fernandez, replacing the injured Filip Salač in the Rivacold Snipers Team this weekend, a tour of Portimão as the pair tried to get up to speed. The younger Fernandez ended the day in P26 as a solid debut.

Arbolino was next up in eight, but again the margins were tiny as the man third in the Championship was just 0.002 off P7, and fellow title contender Ogura was ninth by virtue of only 0.034. He moved back up the timesheets in a big way, and didn’t suffer a repeat of a huge wobble he’d had at the final corner in the morning.