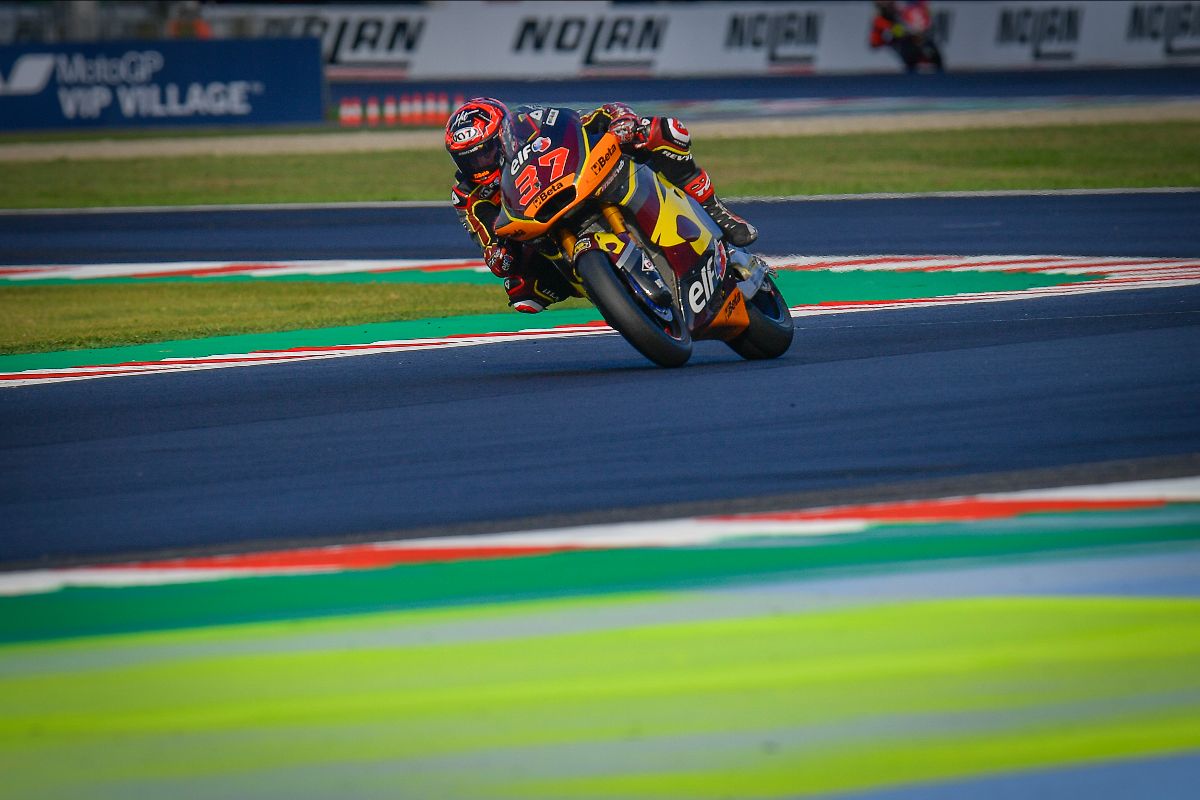 The Spaniard heads timesheets from the Championship leader, with Raul Fernandez down in eighth after a damp FP1 and a dry window of opportunity in FP2

Augusto Fernandez (Elf Marc VDS Racing Team) put together an impressive day of two halves on Friday at the Gran Premio Nolan del Made in Italy e dell’Emilia Romagna, fast in the wet and the dry and top overall. He has close company from Championship leader Remy Gardner (Red Bull KTM Ajo) in second, with Xavi Vierge (Petronas Sprinta Racing) locking out a top three split by less than a tenth.

Title challenger and rookie sensation Raul Fernandez (Red Bull KTM Ajo) ended Day 1 in P8 and will be looking for more on Saturday.

FP1
Nicolo Bulega (Federal Oil Gresini Moto2) topped the timesheets in a wet FP1 with a 1:48.322, ahead of Augusto Fernandez just 0.063s in arrears. Rookie Tony Arbolino (Liqui Moly Intact GP) impressed in the wet and enjoyed a solid opening stint with P3.

Bo Bendsneyder (Pertamina Mandalika SAG Team) also got caught out, but the Dutchman didn’t technically crash. Instead, he pulled off a true all-timer with one of the greatest saves ever.

FP2
It was by no means perfect in the afternoon but by the end, the intermediate class were able to get in some slick running. Augusto Fernandez was fastest as he impressed in both sessions, with Championship leader Gardner the rider a close second in the afternoon, 0.076 off. Xavi Vierge (Petronas Sprinta Racing) also finished within a tenth of the top in third, with a bigger gap back to his teammate, Jake Dixon, in fourth.

Gardner was the first rider to venture out on slicks as no rain fell for large parts of the afternoon and after a couple of laps, the Australian went P1. This prompted everyone else to stick a set of slick tyres in as we witnessed a very busy final 10 minutes of the day, with every rider improving their times.

Those times were chopping and changing lap by lap, but Raul Fernandez (Red Bull KTM Ajo) was seemingly struggling to find pace. The Spaniard, second in the title fight, was 30th with under a minute to go but pulled out two personal bests to climb to what could be a crucial P8.

One headline crash saw Joe Roberts (Italtrans Racing Team) take a tumble, and sadly the American was then declared unfit for a broken left collarbone.

Combined timesheets
Augusto Fernandez, Gardner and Vierge end the day close at the top with Dixon fourth, 0.516 off. But the Brit had some breathing space of his own as Vietti took P5 but 1.223 down on Augusto Fernandez.

Lowes finished a solid P6 ahead of Ogura, with both bouncing back from FP1 crashes. Raul Fernandez is 1.4s shy of Augusto Fernandez’ and down in P8, with Somkiat Chantra (Idemitsu Honda Team Asia) ninth fastest on Friday. 2021 FIM Moto2™ European Champion Fermin Aldeguer (+EGO Speed Up) completes the top 10, impressing once again.