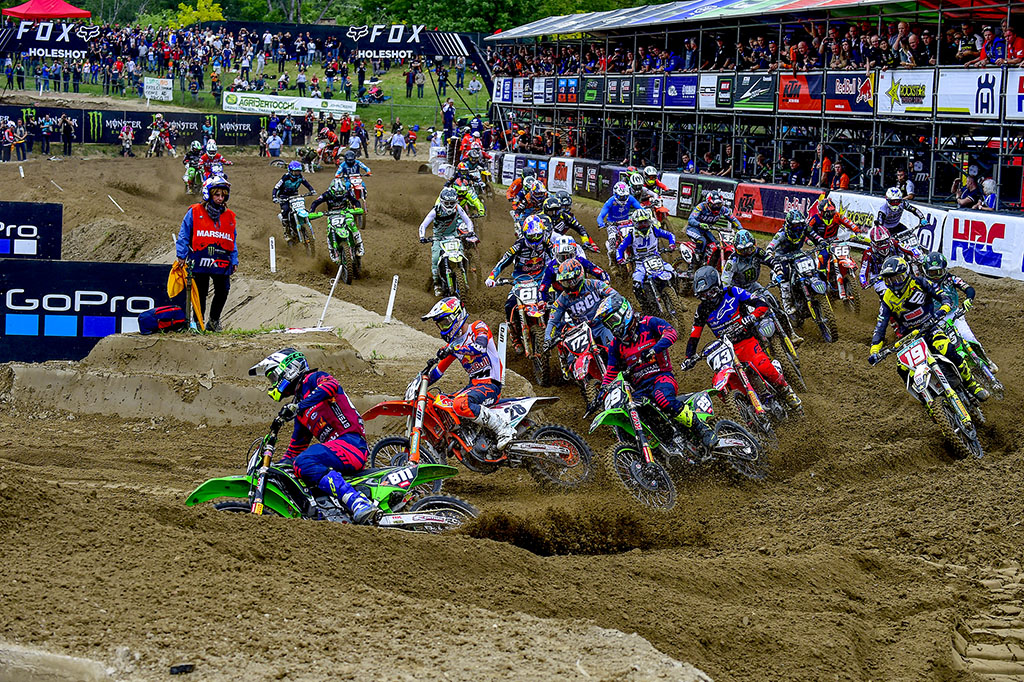 With a week of rest, the FIM Motocross World Championship gears up for another Italian triple-header, though this time in Mantova with the MXGP of Lombardia, the MXGP of Città di Mantova and the MXGP of Europe.

Mantova, located in the north of Italy is a modern take on a sand circuit, featuring a series of man-made jumps, while the sand sits atop a hard base, which makes this track different to other sand circuits.

This weekend will be the 11th time that the FIM Motocross World Championship will visit this venue, with the first time being back in 1991 when American Trampas Parker won in the 250cc class. Since then a list of victors at the Mantova circuit include the likes of Marnicq Bervoets (1996), Mickael Pichon(2000), Marc de Reuver (2008) and more recent winners like Antonio Cairoli, Romain Febvre, Tim Gajser and Jorge Prado.

Last season, the MXGP of Lombardia was the prefect weekend for Red Bull KTM Factory Racing as Antonio Cairoli and Jorge Prado both took double race wins and the overall victories in MXGP and MX2 – so it will be interesting to see if we will see any new faces added to the winners list in Mantova.

In the EMX250 class all eyes will be on Hutten Metaal Yamaha Racing’s Thibault Benistant who is the guy to beat as he leads the championship by 38 points over Husqvarna Junior Racing Maddii rider Mattia Guadagnini and Isak Gifting who has recently joined the Diga Procross GasGas Factory Juniors squad.

It will be interesting to see if Guadagnini will be able to repeat his success in Mantova from last season, as he took two race wins to grab the overall. Though from what we saw in Latvia a month ago, Benistant will not make that easy for him and for sure we will have a great challenge for the top spot on our hands.

Meanwhile the MXGP of Lombardia will also welcome back round three of the WMX Championship, as the world’s fastest ladies will make their return to racing on the world stage for the first time since March. As it stands, Courtney Duncan continues to lead the way, with Larissa Papenmeier second and Kiara Fontanesi in close third.

The championship is extremely close between the ladies so it will be crucial for each one of them to get some solid results and claim those all-important championship points.


MXGP
Now with the red plate in hand and a possibility of a 10th world title in sight, Red Bull KTM Factory Racing’s Antonio Cairoli will be more determined than ever to carry on with those solid rides that we witnessed in Faenza and add a few more points and possibly wins to his name.

Last season he was victorious at the MXGP of Lombardia with two race wins, though it is not the first time he has won a GP there, having won previously in 2007 and 2010 back in his MX2 days. Now all eyes will be on the Italian to do the same once more and give his home fans something to cheer about on the side-lines.

Though of course there will be immense pressure from the rest of the field, and in particular Jeremy Seewer of Monster Energy Yamaha Factory Racing who has been in incredible form recently. He took his first race win in MXGP during the MXGP of Città di Faenza and will no doubt be keen to do the same this time around in Mantova, as he chases his first MXGP overall victory.

Fellow Monster Energy Yamaha Factory Racing pilot Gautier Paulin is another rider to look out for around the Mantova circuit as he will be looking to add another podium there following his third-place finish during the MXGP of Lombardia last season.

Then there’s Romain Febvre of the Monster Energy Kawasaki Racing Team who will be more motivated than ever to repeat his success at the Italian circuit in 2015, and challenge for those top positions, as he has done so during the past several GP’s, in order to get back on the podium. The Frenchman looked strong in Faenza, though his riding in Latvia also showed that he is a strong competitor in the sand, so for him it will be the case of getting the start and staying out of trouble.

Tim Gajser of Team HRC will also be another strong contender for the podium and race wins this weekend, having previously been successful in Mantova back in 2016 when he took the overall with two race wins.

In Faenza, Gajser made a good recovery following at tough time in Latvia when the season restarted. Though now with a fresh outlook and focus on enjoying the racing, this could be a turning point for Gajser and could see him back on top once again as he defends his MXGP title.

Let’s not forget a rider who has been really impressive recently, that is Red Bull KTM Racing’s Jorge Prado. Despite being the rookie of the class, Prado has really proved himself as a real threat recently, as his MXGP race win as well as first GP victory during the triple-header in Faenza speaks for itself. Then there’s his incredible starts, which have been a key to putting the young Spaniard in front and battling with the likes of Herlings, Cairoli and Seewer during the last few GP’s.

Additionally, Prado has been victorious in Mantova previously, having won two races and the overall in MX2 during the MXGP of Lombardia last year, so it will be good to see what the 19-year-old can bring to the table this time around.

Additionally, Gebben Van Venrooy Yamaha Racing’s Alessandro Lupino will be looking to continue with his momentum from the MXGP of Emilia Romagna, where he finished the races in 7th and 10th for 9th overall, making it one of his best results to date.

Other riders to look out for are Glenn Coldenhoff of Standing Construct GasGas MXGP and Arminas Jasikonis of Rockstar Energy Husqvarna Factory Racing who are two other riders that could make things interesting. Both strong riders in the sand, the pair have proven that they can win races and run with the leaders in Latvia, though for Jasikonis especially, it’s just a case of getting out of the gate.

Samuele Bernardini of Ghidinelli racing s.s.d s.r.l., Michele Cervellin from SDMCORSE-YAMAHA and Nicholas Lapucci rider for KTM Beddini MX2, will be looking to impress their home fans as they aim for top results.

As always though, there are too many names to name when it comes to picking a winner, as the MXGP class is truly stacked this season, so at this point it’s a matter of who can get the start and keep it on two wheels – gone are the days when the category was dominated by a single rider.


MX2
In MX2, the championship chase continues as Tom Vialle from the Red Bull KTM Factory Racingsquad continues to lead the way with a 21-point advantage over Monster Energy Yamaha Factory Racing’s Jago Geerts. The last several GP’s have been a mixture for the two as both have wrestled with their own sets of struggles, though despite that both have reliably battled at the front.

Vialle has been consistently on the podium, while for Geerts things have been a little tougher, especially during the MXGP of Città di Faenza as he missed out on a spot due to a string of crashes in the second MX2 race. Though despite that he managed to pick things up for the next round and keep the championship gap in control.

There is no doubt that during the MXGP of Lombardia we will see Vialle and Geerts go at it again for race wins and the podium, though things will be made tougher for the two as they come under pressure from the likes of Maxime Renaux of Yamaha SM Action MC Migliori J1 Racing. Renaux has been pushing lately and during the GP’s in Faenza showed just how much he wanted that win. With his first race and GP victory under his belt, there is no doubt that the Frenchman will enter this next round with a big confidence boost, though it will be interesting to see if the change of terrain will affect his performance.

Then there’s F&H Kawasaki Racing’s Roan Van de Moosdijk and Mathys Boisrame who have been consistently challenging at the top end of the field recently. Though the trio of races a couple of weeks ago in Faenza may have not headed in the direction that the team hoped, the awesome string of podiums in Latvia are still fresh on our minds and is a reminder of what the pair can do on a good day and in the sand. Let’s not forget that they have Marc de Reuver, a former GP winner in Mantova, as their trainer, so there is no doubt that he will have some extra tips for the riders that will no doubt see them battle at the top end of the field once again.

But of course, they are not the only two team-mates that are worth keeping an eye out for, as Rockstar Energy Husqvarna Factory Racing’s Thomas Kjer Olsen and Jed Beaton have been on the rise recently, as they made their comeback to the podium at the previous two rounds of the series.

This season both Beaton and Olsen have struggled to put together two solid results in the races, while Olsen has had the additional string of injuries to deal with. Though it looks like this could be all behind them as the pair get back to where they belong. Both are strong in the sand, and Olsen also finished second overall during the MXGP of Lombardia in 2019, so it would be good to see them back at the front once again.

Monster Energy Yamaha Factory Racing’s Ben Watson is currently sixth in the championship standings and despite some bad luck in the form of crashes and technical issues, the Brit has still shown a glimpse of what he is capable as he battled in the top 5 on several occasions. Now as we return to sand, it will be good to see if Watson can get back on top from and put together a consistent result that will see him edge closer to the podium once again.

Other riders that will be looking to impress in Italy are the local heroes Morgan Lesiardo of steelsdrjack, Alberto Forato of Husqvarna Junior Racing Maddii and Joakin Furbetta from KTM Beddini MX and Fillipo Zonta of Maggiora Park Racing Team.