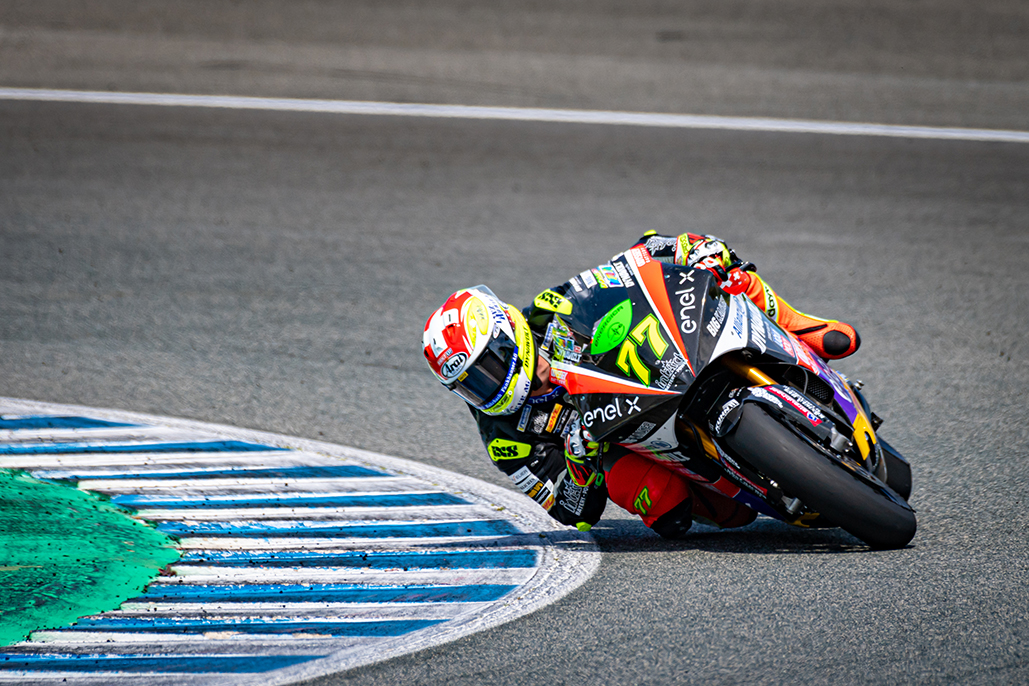 After two pre-season tests at the Circuito de Jerez-Angel Nieto, it’s action stations for the 2021 FIM Enel MotoE™ World Cup as the grid return to the same venue for Round 1 at the Gran Premio Red Bull de España. It’s familiar turf for all by now, and all signs point to another classic race to open the season.

Eric Granado (One Energy Racing) arrives as the fastest rider in testing, the Brazilian leaving it late to pip Dominique Aegerter (Dynavolt Intact GP) to the top on the final day and set a new – although unofficial – lap record. It was just 0.041 between the two, however, and Aegerter dominated the race simulation… but Granado was one who dropped back and didn’t push. Last year, it was similarly split: Granado won the first race of the season at Jerez, and Aegerter the second as the Cup started the year with two rounds in Andalucia. This time, there’s one top step at the Spanish GP… so who’s going to be on it?

Granado and Aegerter certainly arrive as key favourites, but reigning Cup winner Jordi Torres (Pons Racing 40) is another who was fast in testing and kept his cards close to his chest in the race simulation. There are no points for being fast in pre-season, so the Spaniard will likely be one to watch again as the lights go out for real. The 2019 Cup winner and 2020 runner up, meanwhile, arrives as an expected contender but so far hasn’t been a key threat at the front. Not having adapted as quickly to changes in the tyres, Matteo Ferrari (Team Gresini MotoE) will be looking for more and with his track record of consistency on race day, can’t be counted out.

The top three on the combined timesheets in the test, however, was completed by Xavier Cardelus (Avintia Esponsorama Racing) as the Andorran continued to impress, but he had close company from the similarly experienced Alessandro Zaccone (Octo Pramac MotoE). Lukas Tulovic (Tech 3 E-Racing), back at full power after his highside last season and subsequent surgery, will be another more experienced competitor looking to bother the podium, and leapfrog those he’s been ahead of so far in MotoE™.

And then there are the two headline-stealing rookies, who many will have a big eye on as Round 1 begins: Fermin Aldeguer (Openbank Aspar Team) and Miquel Pons (LCR E-Team). Aldeguer was the talk of the first test as he came out guns blazing with immediate speed, but Pons also started to catch his compatriot on take two. What can they do once it’s about putting everything together in a race and the lights are going out for real?

MotoE™ rookie but Grand Prix veteran Yonny Hernandez (Octo Pramac MotoE) will also want to move forward, as will fellow electric debutant Hikari Okubo (Avant Ajo MotoE) after they did a solid job slotting in but will have seen the speed of the likes of Aldeguer. Veteran Mattia Casadei (Ongetta SIC58 Squadra Corse), who was a little down the timesheets in testing, will also want a lot more and has already been on the podium at Jerez. He missed the first test due to injury and was getting up to speed in the second… will he make a leap forward with more time to recover and more time on the bike at Round 1?

Two tests, a good few months and some fresh faces later, the FIM Enel MotoE™ World Cup is about to return. Tune in for the first E-pole of the season on Saturday at 16:05 (GMT +2) and then watch the lights go out on race day at 10:05.