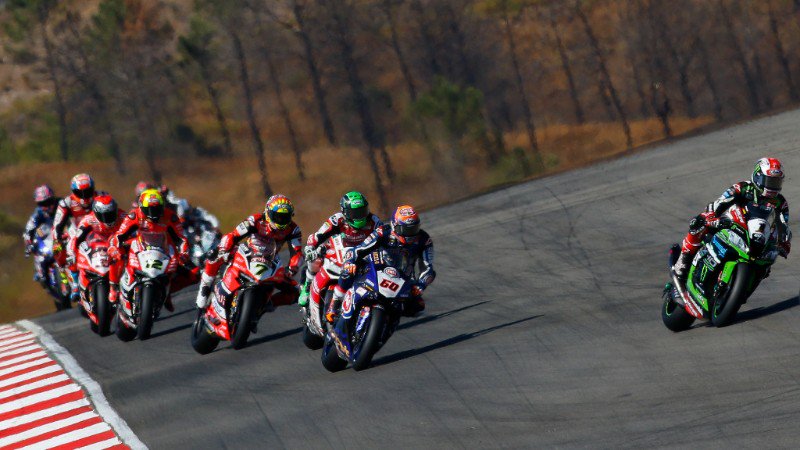 It’s time for the MOTUL FIM Superbike World Championship bikes to make their return to the grid for Round 10 of the season, and anticipation is building as we’re set for four explosive final rounds. Taking on the undulating Autodromo Internacional do Algarve this weekend, our 20 riders are preparing for the scorching skies and obliterating on track battles. 4.5km of tarmac follows the rollercoaster style circuit of Portimao, and with a stunning record here for reigning world champion Jonathan Rea (Kawasaki Racing Team WorldSBK), fans are set for weekend to remember.

With a championship lead of 92 points heading into the Nolan Portuguese Round, Jonathan Rea will be keeping one eye on the title this weekend. With a strong history around Portimao, the Northern Irish rider has competed in 18 WorldSBK races around the 4.5km circuit, taking five victories and 12 podium finishes. Performing well with both the Honda and Kawasaki, it’s clear Rea enjoys the pace of Portimao. Hoping to continue his run of four consecutive wins in 2018 which began back at Laguna Seca this season, he will also look at taking his sixth consecutive victory around Portugal. The numbers speak for themselves, but it will be the race pace that does the talking.

Heading back to the track after a somewhat turbulent summer break, Chaz Davies (Aruba.it Racing – Ducati) will be nursing a collarbone injury following two training crashes this summer, but hopes to be back and fighting fit this week. Breaking his right collarbone in the first week of the break in a mountain bike crash, he later saw the crack re-open following a Supermotard crash two weeks ago. Looking at taking his first victory around Portimao – his best result here is a second – he will come out fighting as he embarks on the Paniagle R’s final eight races.

Sitting in third position in the championship standings, Michael van der Mark (Pata Yamaha Official WorldSBK Team) returns to the track which saw him take his debut Yamaha podium last season, after a stunning race two battle. Three top five finishes out of four races are welcomed for the Dutch rider in Portugal, as well as a win here in WorldSSP in 2014 on top of STK600 wins. A strong history in the Algarve and some strong official testing times will see him fight to keep hold of his strong championship position.

Whilst on the other side of the garage, Alex Lowes (Pata Yamaha Official WorldSBK Team) will be looking at improving his best result of fourth here, as he continues to feel more comfortable on the R1.

Milwaukee Aprilia’s Eugene Laverty returns to a favoured circuit of his, and his eyes will be on the podium prize. Making a breakthrough with his team back at Laguna Seca, the Irish rider was able to regain the all important feeling in the rear tyre he had been searching for with the RSV4 RF and has two podiums to his name in 2018. With 10 race appearances in his WorldSBK career here, he has collected two wins and three podiums and welcomed a top four finish in 2017’s race two. With improvements found, Laverty will be a strong contender for the podium under the sunny Algarve skies.

Another rider who suffered an injury throughout the summer was Leon Camier (Red Bull Honda World Superbike Team), but with four days of testing at Portimao back in August he was able to fully test his fitness levels ahead of the final third of the season. Fracturing his C5 vertebrae in Suzuka 8 Hour testing, he was able to use the break to recover and now is determined to improve the results with the Honda CBR1000RR Fireblade SP2. With an all new bike underneath him following a busy summer for his Ten Kate squad, it will be a big weekend for the British rider. A solid history of top five finishes here will help with his pace, on top of the top four finish with MV Agusta last year.

Frenchman Loris Baz (GULF Althea BMW Racing Team) had a busier summer break than anticipated as he was called in as a replacement rider for KTM at the British MotoGP™. But his thoughts will now return to WorldSBK, as he continues to work on improving his BMW machine, sitting in 12th in the world championship standings. Baz last raced around Portimao in 2014, and took a podium finish that same year – in Race One. Memory and race craft will be key for the 25 year old this weekend, and at a track he has never finished outside of the top seven around, it will be an interesting weekend for him.

With some strong days at the official summer test here, Jordi Torres (MV Agusta Reparto Corse) will be looking to make some improvements in his final four rounds of 2018 after the Spaniard has had a tough transition to the Italian machine. Making some fundamental changes throughout the two days, he will hope his team has a strong year like 2017 where they were able to take home a top four. Torres has an impressive pace himself in Portugal, scoring points in all four races and taking a top five finish in 2017. Currently in 13th in the championship standings, he will be ready for a big battle.

Don’t miss out on any of the Portimao action as WorldSBK makes it much anticipated return from 14th – 16th September. Bikes take to the track for FP1 on Friday at 09.45LT (+1 GMT), with Superpole beginning at 10.30 on Saturday ahead of Race one at 13.00. Lights go out for race two at 15.15LT to end the weekend with a bang.

Rea doubles up in Indonesia with wet-weather WorldSBK victory

New schedule for Sunday, Race 1 postponed due to weather conditions

Razgatlioglu fastest at Mandalika while Rea blasts to second