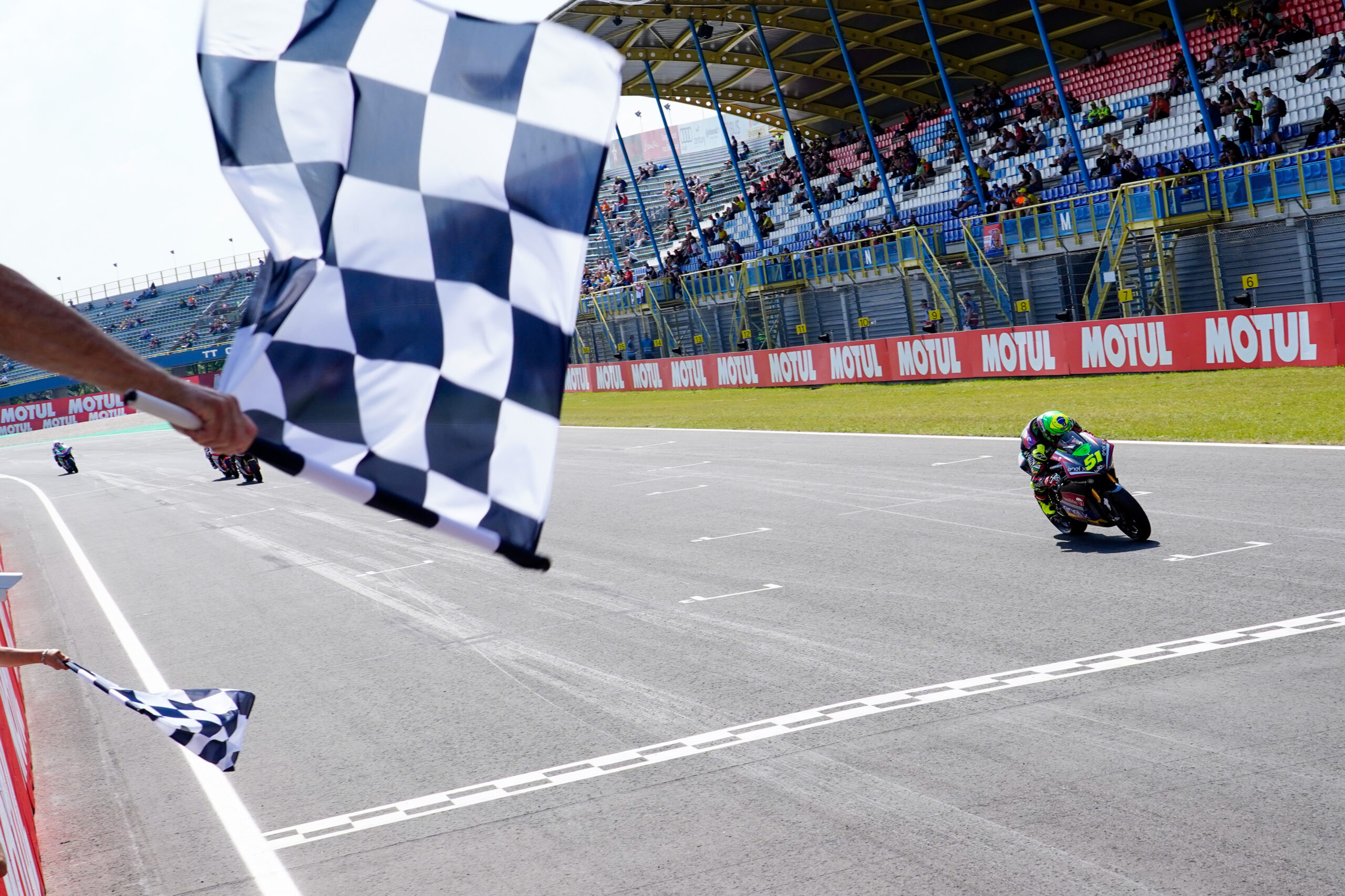 Eric Granado (One Energy Racing) remains the king of bouncing back in the FIM Enel MotoE™ World Cup, with the Brazilian putting in another stunner on Sunday to take win number 2 of the season and gain some serious ground in the standings, now up to third. Jordi Torres (HP Pons 40) took second and fought off points leader Alessandro Zaccone (Octo Pramac MotoE) as the two duelled to the limit, although with drama for Dominique Aegerter (Dynavolt Intact GP), Zaccone extends his overall lead at the top.

From the middle of the front row, it was Lukas Tulovic (Tech3 E-Racing) who out-dragged polesitter Granado into Turn 1 to snatch the holeshot, with World Cup points leader Zaccone holding station in third. The key drama then unfolded at the end of the opening lap as Aegerter, the rider second in the standings heading to Assen, was down at the chicane – rider ok, but front washing away.

Lap 2 saw Zaccone take the lead, with Tulovic getting a bit beaten up after the perfect getaway. The German was shoved down to P5 as the riders ventured onto Lap 3, and Granado then put in the fastest lap of the race to take the lead at the beginning of Lap 4. There was an eight-rider freight train split by just 1.6s with three laps to go, but the Brazilian had half a second advantage as Torres made a Turn 1 move past Zaccone into second.

Granado was in the groove though. With two laps to go he was still half a second clear, and Torres and Zaccone had gapped fourth place Matteo Ferrari (Indonesian E-Racing Gresini MotoE). Just 0.6 covered the leading trio with just one more lap to go, but Granado held firm.

Torres was pushing but the number 51 wasn’t to be caught, staying just about out of reach as the HP Pons 40 rider then had to switch his attention to Zaccone. The Italian went for a move – as expected – but this time Torres really did get his elbows out, firing straight back and some contact between the two. Zaccone then had a moment to compound it further, but the number 61 nevertheless completed the podium behind Torres. Granado, over the line, kept the gap at eight tenths.

2019 World Cup winner Ferrari claims his best finish of the season so far in fourth, 1.1 clear of fifth place Tulovic by the flag. Mattia Casadei (Ongetta SIC58 Squadra Corse) was just 0.036 behind the German, meanwhile, with Fermin Aldeguer (Openbank Aspar Team) only another 0.050 off in seventh. Hikari Okubo (Avant Ajo MotoE) made a great start and was up to P4 at one point but the Japanese rider was forced to settle for P8 in the end, with Yonny Hernandez (Octo Pramac MotoE) and Barcelona winner Miquel Pons (LCR E-Team) rounding out the top 10.

Heading into the summer break, 17 points split Zaccone, Torres, Granado and Aegerter in the title race. Zaccone leads by seven points, Torres gains and Granado too, with Aegerter now fourth but equal on points with Granado. After another classic at the Cathedral, make sure to stay tuned with more of the same coming up in Austria next time out!

Eric Granado: “I’m very happy. It’s like a redemption for me, like in Le Mans. Unfortunately, we had a problem in Barcelona but I have a great team with me, a lot of support from all the people. We did a great job all the weekend, I felt so good on the bike. I was really thinking during the race to not do any mistakes, the track was very hot so finally, when I was first, I was trying to be smooth and not make any mistakes and finally, P1. So happy, I can only say thanks to my team and sponsors and everyone who never gave up on me.”