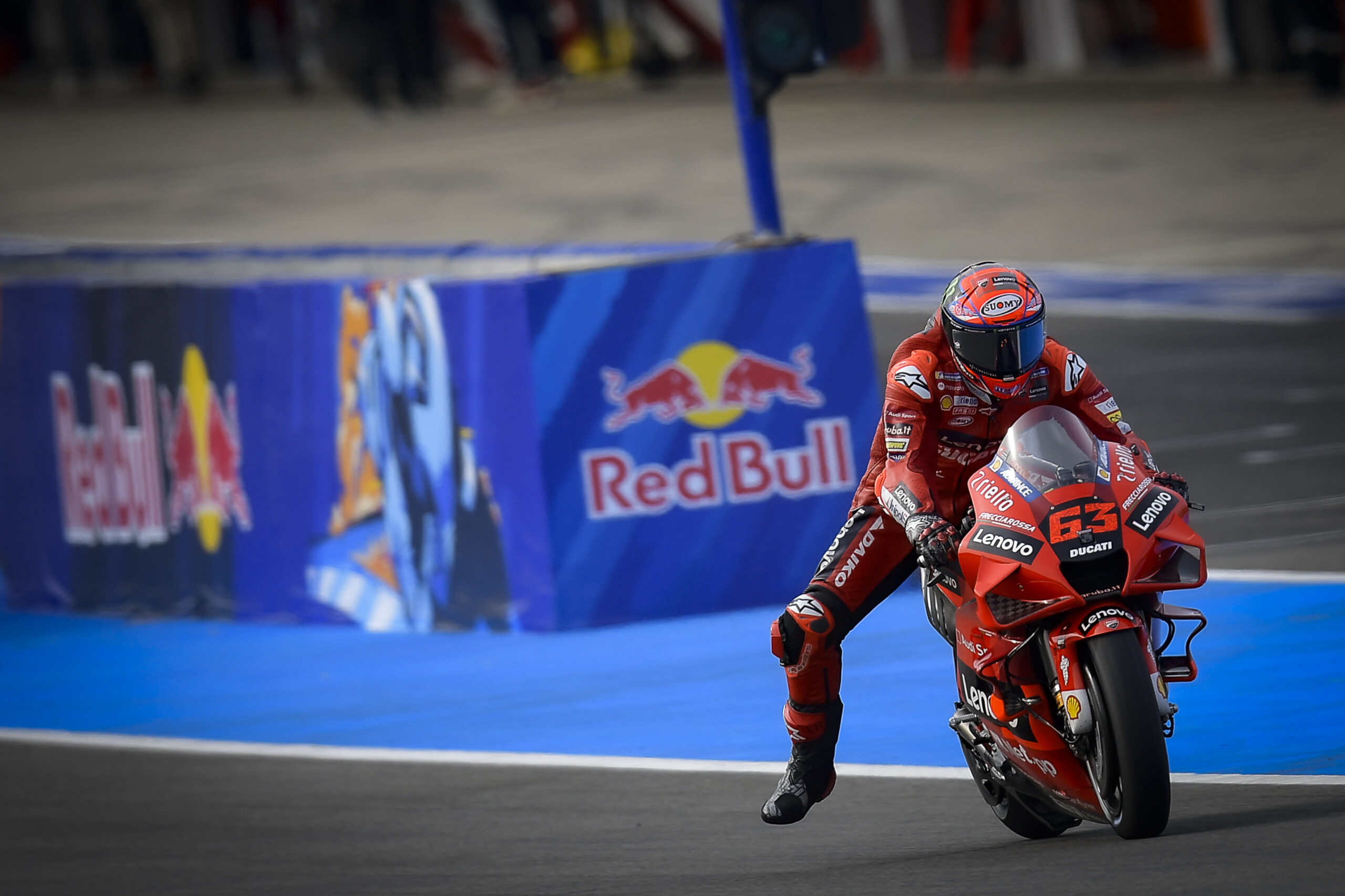 The Italian’s speed impresses once again on Friday as he denies Quartararo, with Aleix Espargaro putting Aprilia in the top three

After Day 1 of the Gran Premio Red Bull de España, it’s an increasingly familiar name on top: Francesco Bagnaia (Ducati Lenovo Team). After some explosive flashes of speed so far this season and last year at Jerez – a track not known for best suiting Borgo Panigale machinery of late – the Italian was top of the pile once again to deny double 2020 Jerez winner Fabio Quartararo (Monster Energy Yamaha MotoGP) by 0.168. Aleix Espargaro (Aprilia Racing Team Gresini) completes the top three as the Noale factory continue to impress with the nearly all-new RS-GP.

In FP1, it was Brad Binder (Red Bull KTM Factory Racing) quickest out the blocks as the South African pulled out nearly two tenths on Aleix Espargaro to go fastest, with KTM showing a step forward early on at the venue and Aprilia retaining impressive pace. Marc Marquez (Repsol Honda Team) was third in FP1, ahead of Bagnaia and Quartararo, with five factories in the top five and 17 riders split by just eight tenths of a second as action began.

FP2 saw more pulling the pin for a time attack, however, with FP3 expected to be dry but nevertheless many pushing early to at least end the day in the provisional top ten. That saw Bagnaia blast to the top late on as the Italian cut chunks off the previous best, once again showcasing his impressive step forward this season as his riding style continues to shine. Quartararo tried to reply but the Frenchman was forced to settle for second, on Friday at least.

Aleix Espargaro’s speed leaves him beaming and expecting to carry it into Saturday too, although it got a lot closer from third down. Franco Morbidelli (Petronas Yamaha SRT) slots into fourth as the Italian retains his Portuguese momentum, half a tenth off the Aprilia ahead, with Maverick Viñales (Monster Energy Yamaha MotoGP) completing the top five.

Takaaki Nakagami (LCR Honda Idemitsu) was reportedly spotted on the 2020 chassis without the carbon fibre insert and took a big step forward as he ended the day in sixth and not just by virtue of a single push. Miguel Oliveira (Red Bull KTM Factory Racing) turned the tables on teammate Binder to take P7 overall on Friday too, with Binder nevertheless still within that top ten and provisional Q2 graduation zone as the South African slipped into P10 late on, denying HRC wildcard and test rider Stefan Bradl.

Between the two KTMs, Alex Rins (Team Suzuki Ecstar) was eighth and Johann Zarco (Pramac Racing) ninth, with that leaving a few key names outside that top ten…

The first is Joan Mir (Team Suzuki Ecstar). The reigning Champion ends Friday in P13, right behind Jack Miller (Ducati Lenovo Team) as both look for more, although Mir has so far taken more MotoGP™ podiums from outside the front two rows of the grid than from on them. Marc Marquez, meanwhile, ends the day in P16 but seemingly didn’t push for a fast lap, leaving everyone guessing on what he’ll have in store for qualifying… especially when it’s a single lap for glory and less a question of stamina for the recovering Spaniard. Valentino Rossi (Petronas Yamaha SRT) finds himself down in P21, looking for much more as his struggles continue despite being the venue where he took his most recent podium.

That creates another tantalising FP3 though, with the session sure to bubble into a shootout at 9:55 (GMT+2) before qualifying starts at 14:10. Has Bagnaia got pole in the bag, or will Quartararo strike back? And what has Marquez got in the locker for Day 2? We’ll find out soon!