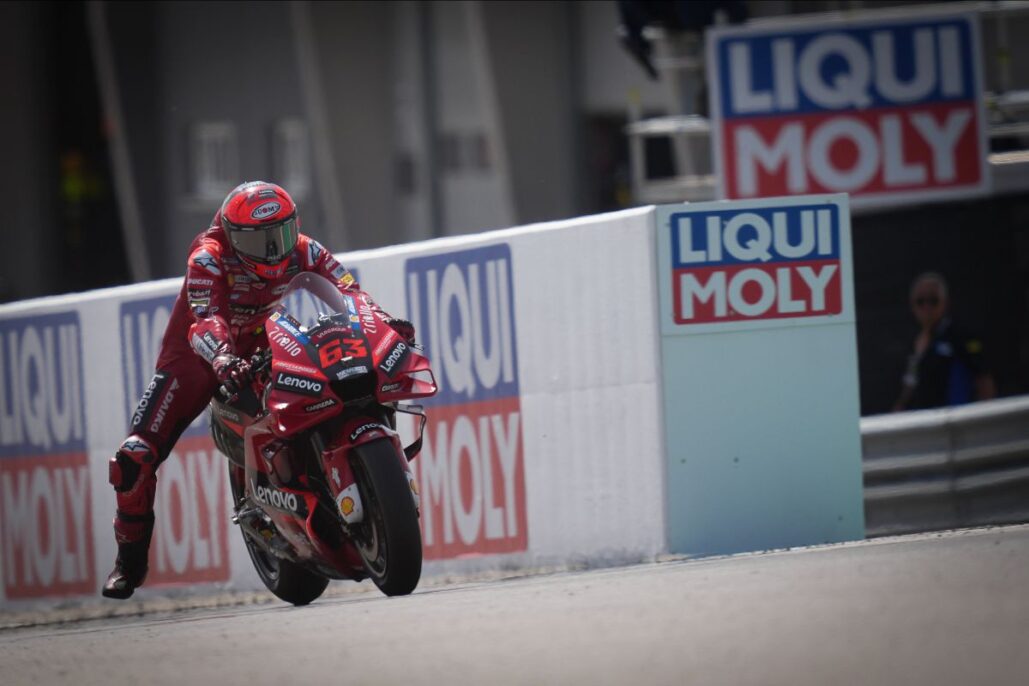 The number 63 puts in a sizzling new pole lap record to head Quartararo and Zarco on the front row in Germany.

Ducati Lenovo Team’s Francesco Bagnaia carried his superb Free Practice form into qualifying for the Liqui Moly Motorrad Grand Prix Deutschland as he secured pole position with a new pole lap record. The Italian was the only rider who could get into the 1:19s in Q2 at the Sachsenring – a 1:19.931, specifically – although the front row was still covered by less than a tenth, and the very same Bagnaia remains the outright lap record holder from earlier in the day in FP3. Monster Energy Yamaha MotoGP™’s Fabio Quartararo gave himself a good chance of extending his World Championship with second on the grid, however, and he has 2021 polesitter Johann Zarco alongside him as Prima Pramac Racing rider took third.

There are three different factories in the top four too, with Aprilia Racing’s Aleix Espargaro heading Row 2, but seven of the Bologna bullets made it into the second part of qualifying and six of those lock out the top eight. Fabio Di Giannantonio (Gresini Racing MotoGP™) topped Q1 before claiming fifth in Q2, ahead of Jack Miller (Ducati Lenovo Team), Luca Marini (Mooney VR46 Racing Team), and Jorge Martin (Prima Pramac Racing).

Pecco was quickly back into the pits for another new soft Michelin rear slick and was the first to go for his second run. He tightened his grip on provisional pole with a 1:20.064 and put more space between himself and the field when he backed that up with the aforementioned 1:19.931. No one would beat that time but, with the temperature pushing into the thirties at the Sachsenring, second position was, appropriately, also hotly contested. Aleix Espargaro clocked a 1:20.120 and then Quartararo a 1:20.093, before Zarco pipped both with a 1:20.030.

However, Quartararo does not lead the World Championship without digging deep, and ‘El Diablo’ had just that little bit more pace left as he put in a 1:20.007 just before the chequered flag. Bagnaia then tried to go for a third run, and while he ran out of time to start a lap again, it mattered not – pole was secured.

Di Giannantonio may have fallen into Q1 but he cleared that hurdle and the Italian rookie was as high as third-quickest before settling in fifth on the grid on a 1:20.128. As it stands, he will start between Aleix Espargaro and Miller, the latter of whom was sixth on a 1:20.150. Miller, however, also has a Long Lap penalty to take on Sunday after crashing under a yellow flag following a crash for Aleix Espargaro in FP4.

Pol Espargaro was an agonising 0.004 seconds away from moving through thanks to his late flying lap in Q1, and the Repsol Honda rider will therefore start at the head of Row 5 of the grid. He will be joined there by Red Bull KTM Factory Racing teammates Miguel Oliveira and Brad Binder, with Row 6 comprised of Alex Marquez (LCR Honda Castrol), Enea Bastianini (Gresini Racing MotoGP™), and home hero replacement rider Stefan Bradl (Repsol Honda).

Alex Rins (Team Suzuki Ecstar) withdrew from the event due to pain from his wrist fractured in Barcelona.

The grid is set, the gauntlet has been thrown down and it’s a Borgo Panigale armada near the front of the field as Quartararo and Aleix Espargaro lead the resistance. Who can become the first non-93 King of the Ring since 2012? We’ll find out at 14:00 (GMT +2) when the lights go out at the spectacular Sachsenring!

Francesco Bagnaia: “I’m happy, we have done a great job. Today, with these conditions that are very hot, and tomorrow it will be even hotter. But in any case, FP4 was a great session, my feeling was good with the tyres, and it was not easy to be constant, but I think all the riders were in the same situation. I’m very happy. I was surprised about starting the weekend like this yesterday, but the feeling has grown, session by session, and now I feel very comfortable with everything. Let’s see tomorrow, with hotter conditions, but I think that our potential is very high this weekend.” 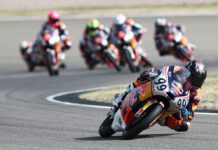 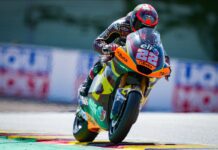 Lowes bounces back with Sachsenring pole 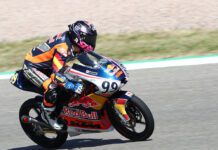