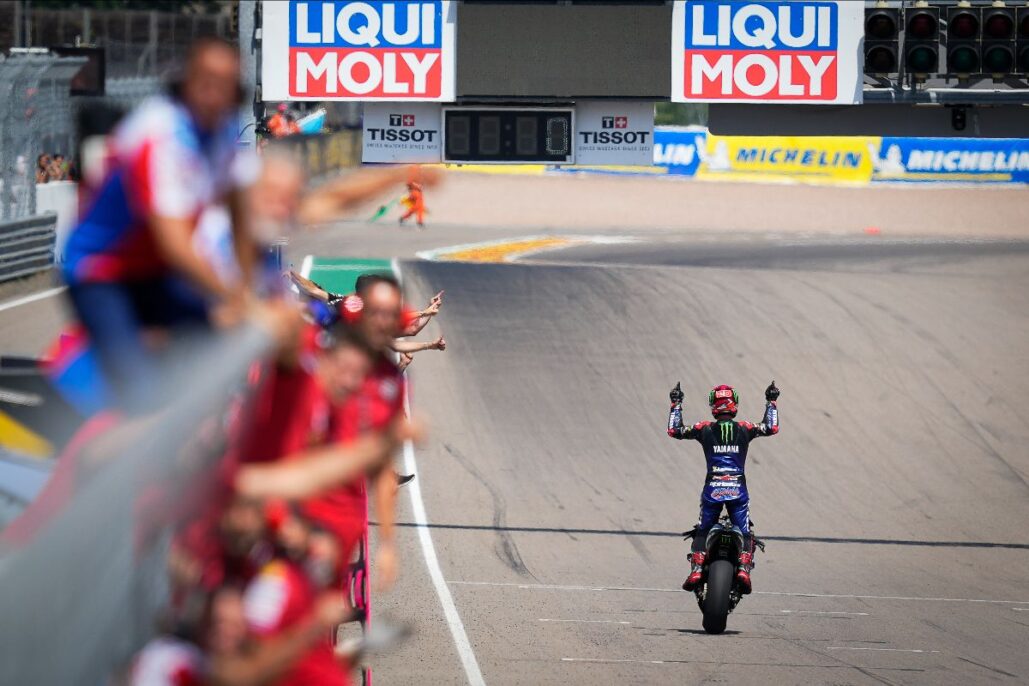 Advantage Quartararo: Bagnaia crashes out as El Diablo stamps some authority on the Sachsenring.

The reigning Champion pulls clear, Bagnaia slides out early and Zarco and Miller beat Aleix Espargaro to the podium.

Championship leader Fabio Quartararo (Monster Energy Yamaha MotoGP™) extended his advantage with a decisive win at the Liqui Moly Motorrad Grand Prix Deutschland, pulling clear of compatriot Johann Zarco (Pramac Racing) for a French 1-2. There was a potentially key shift in the title fight on Sunday too, as Francesco Bagnaia (Ducati Lenovo Team) slid out early on, with teammate Jack Miller then going on to slice past two Aprilias to complete the podium – overcoming a Long Lap penalty he’d been given on Saturday.

Quartararo nabbed the holeshot from Bagnaia, and the number 63 got tucked in on the chase. He briefly took over at the start of Lap 2 but El Diablo hit back, and not long after disaster struck for Pecco, the rear sliding out on Lap 4. From that point on, Quartararo had the hammer down.

After that, Zarco was into second past Aleix Espargaro (Aprilia Racing), with Fabio Di Giannantonio (Gresini Racing MotoGP™) and Miller next up. The Australian then served his Long Lap for crashing under yellows on Saturday, dropping to seventh but soon back past Jorge Martin (Prima Pramac Racing).

By then, Maverick Viñales (Aprilia Racing) was past Diggia and tucked in behind teammate Espargaro, applying the pressure for a good few laps. Would he make a move? It was the best show of pace so far from the number 12, but then bad luck hit: the ride rear height device got stuck, and that was race over for ‘Top Gun’.

After little more than 20 laps, Quartararo had stretched his margin over Zarco to more than three seconds. His fellow Frenchman enjoyed a similar gap over Aleix Espargaro, but Aprilia’s ‘Captain’ was coming under serious attention from Miller. The number 43 fired his Ducati down the inside at Turn 1 on Lap 23 but ran it in too deep, and the result was the same when he tried again on Lap 26. Ironically, Espargaro himself went wide through there on Lap 28 and Miller marched on through into third.

Quartararo got more than five seconds ahead of the rest of the field in the last handful of laps before cruising to victory by a final margin of 4.939 seconds. Zarco took the chequered flag 3.433 seconds up on Miller, with Aleix Espargaro a few tenths further back and off the podium.

Fifth was a stunning ride from Luca Marini (Mooney VR46 Racing Team), and he prevailed in a battle against fellow sophomore Martin, Marini also getting a little too close for comfort to the battle ahead in the latter stages.

Brad Binder (Red Bull KTM factory Racing) demonstrated once again that he is the quintessential ‘Sunday man’ by riding up from 15th on the grid to seventh, BB33 getting his elbows out. The top 10 was rounded out by Di Giannantonio, Miguel Oliveira (Red Bull KTM Factory Racing), and Enea Bastianini (Gresini Racing MotoGP™) as the Beast recovered from as low down as P20 in the early stages.

A further five riders joined Bagnaia and Viñales as DNFs. Pol Espargaro (Repsol Honda Team) retired due to rib pain from a crash in Free Practice and Alex Marquez (LCR Honda Castrol) also had a rear ride height device failure after it wouldn’t disengage after the start. His team-mate Takaaki Nakagami (LCR Honda Idemitsu) crashed out, as did Darryn Binder (WithU Yamaha RNF MotoGP™ Team) and Joan Mir (Team Suzuki Ecstar). The latter did so at Turn 1, moments after Bagnaia had gone down there, having been wide when Oliveira went to overtake him.

It’s now 34 points of breathing space for Quartararo at the top of the standings. Aprilia Racing’s Aleix Espargaro remains second in the title race after finishing fourth at the Sachsenring but the Ducati Lenovo Team’s Francesco Bagnaia has a mountain to climb after he crashed out while chasing Quartararo on Lap 4.

Now, we head to the ‘Cathedral’ for the last round before the summer break. Can Quartararo hammer that advantage home? Tune in for the Motul TT Assen on June 24-26!

Fabio Quartararo: “I feel tired! I was ill during the whole weekend, and in the race I was coughing a little bit, and I have no words. We made a choice on the rear tyre, the medium, that was really risky, and in the race, we were lucky because it dropped much more than expected, but I’m super happy!

“Today is Father’s Day in France and I haven’t said anything until now, so now I want to say Happy Father’s Day!”