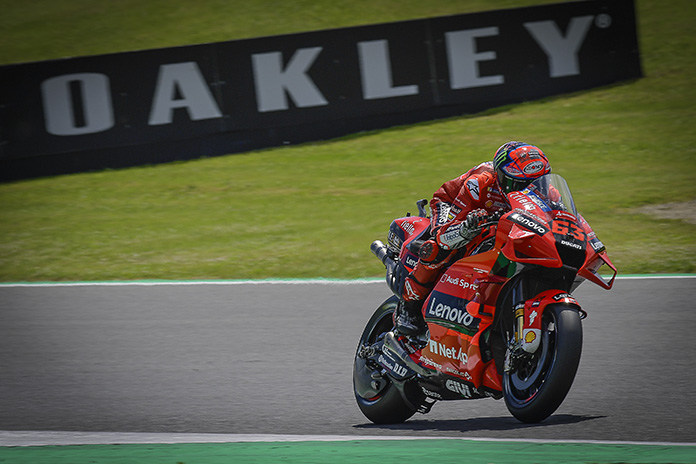 Ducati lead Suzuki lead Yamaha, with KTM stealing some of the spotlight in hot pursuit on Day 1

Francesco Bagnaia (Ducati Lenovo Team) is the man to beat after Day 1 of the Gran Premio d’Italia Oakley, the Italian just pipping Alex Rins (Team Suzuki Ecstar) to the top by 0.071 by the end of play. Franco Morbidelli (Petronas Yamaha SRT) continued impressing to lock out the top three and end Friday as the top Independent Team rider, with a sunny day’s work at the stunning Autodromo Internazionale del Mugello welcoming MotoGP™ back to Italy.

FP1
The first man at the top was Ducati test rider and, this weekend, Pramac Racing replacement rider Michele Pirro as the Italian was fastest out the box. From there though, Yamaha started to put the hammer down as Maverick Viñales (Monster Energy Yamaha MotoGP) and teammate Fabio Quartararo traded fast laps, pretty close together on track to boot. A new front start device was also spotted on Iwata marque machinery Day 1.

Alex Rins enjoyed a brief stint at the top before Viñales then hit back, the number 12 eventually ending FP1 two tenths clear of Johann Zarco (Pramac Racing). Rins was third ahead of teammate and reigning Champion Joan Mir, with Morbidelli 0.008 further back and Bagnaia only a further 0.002 in arrears.

No one crashed in the session, but Rins did have a run off at Arrabbiata 1, getting straight back onto the track.

FP2
In the afternoon, KTM stole a few headlines. A new chassis first spotted by pitlane reporter Simon Crafar at the Jerez Test was spotted again as the day began, and FP2 saw a show of serious form from the Austrian factory. Bagnaia was fastest first for Ducati, but the Italian was soon deposed by Miguel Oliveira (Red Bull KTM Factory Racing). Brad Binder (Red Bull KTM Factory Racing) hit the top next before Oliveira returned the favour, the Portuguese rider then beating his own best to stay fastest a lap later. And there he stayed for more than half an hour, before the final push – with an eye on Q2 – got underway.

That’s when Rins struck to lead the way, but Bagnaia hit back on his last lap of the day to go fastest by less than a tenth. Morbidelli slotted into third, with Quartararo making his way back up to fourth. Binder had one of his best efforts scrubbed for track limits, but the South African was able to get the job done on take two to complete the top five – just pipping his teammate by the flag as the Red Bull KTM Factory Racing form held firm in the face of a concerted onslaught from the rest, taking fifth and sixth.

Once again, no one crashed in the session, although Valentino Rossi (Petronas Yamaha SRT) had an excursion at Turn 1, the ‘Doctor’ able to rejoin.

Combined timesheets
The majority improved in the afternoon, with the top seven in FP2 – Bagnaia, Rins, Morbidelli, Quartararo, Binder, Oliveira and, in seventh, top Honda Takaaki Nakagami (LCR Honda Idemitsu) – the top seven overall. Eighth place on the combined times is FP1’s fastest man Maverick Viñales, with the Spaniard’s best in the morning his best overall and absolutely identical to that of Nakagami in FP2.

Aleix Espargaro (Aprilia Racing Team Gresini) ends Day 1 in ninth place, with Jerez and Le Mans winner Jack Miller (Ducati Lenovo Team) down in tenth and the second Ducati on the timesheets at a venue many would consider to be increasingly their turf. Miller voiced some frustrations over traffic in FP2 however, something that could mean there’s a fair bit more to come in FP3.

Pramac Racing’s Johann Zarco (Pramac Racing) is the first looking to reiterate Ducati’s recent dominance in Mugello and move up the timesheets in FP3 as he finds himself a tenth outside the Q2 graduation zone on Friday, and by only a tenth. He was the second rider to not improve in the afternoon, along with Viñales.

Reigning Champion Joan Mir (Team Suzuki Ecstar) ends the day down in P12, just ahead of returning eight-time World Champion Marc Marquez (Repsol Honda Team) as the latter takes on one of the fastest and most physical challenges of the season. They’ll want to put in a push in FP3, as will Valentino Rossi after a tough day on the timesheets for the ‘Doctor’ down in P21.

That’s it from Friday, with the weather in Tuscany looking a little more stable than that in Le Mans and FP3 likely to give the field a chance to push forward. Tune in for that, before qualifying from 14:10 (GMT +2).