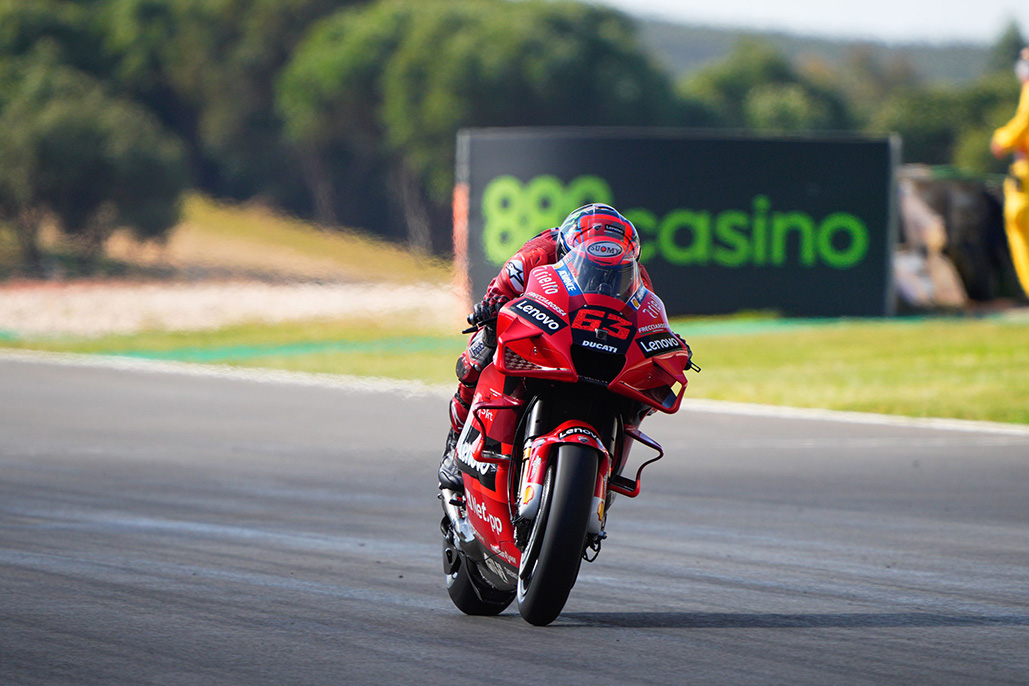 Day 1 at the Grande Premio 888 de Portugal belongs to Francesco Bagnaia (Ducati Lenovo Team) as the Italian put together a pretty imperious performance to end the day fastest on the combined timesheets. From wet patches in FP1 to a fully dry FP2, the Italian was a force to be reckoned with most of the time he was on track, with red sectors aplenty. He ends Friday three and a half tenths clear of Fabio Quartararo (Monster Energy Yamaha MotoGP), with reigning Champion Joan Mir (Team Suzuki Ecstar) taking third overall. The headlines were stolen a little, however, by the return of eight-time World Champion Marc Marquez (Repsol Honda Team)… and it was quite a return.

Listening to the number 93 in his pre-event Press Conferences, it seems he had just as many questions as everyone else regarding his return from injury nine months after his crash in Jerez. And Friday gave us a few answers. In FP1 Marquez was third overall and only lost out on the top spot after two very late lunges from Alex Rins (Team Suzuki Ecstar) and Maverick Viñales (Monster Energy Yamaha MotoGP), and by the end of play the Repsol Honda rider was sixth. Happy, fast, and with a few questions remaining about his stamina as could be expected… but as exciting to watch as ever.

The first lap was a steady one, before the number 93 started to reel in those ahead of him as Bagnaia trolled those taking it steady with some consistent attacks on the top. With the damp patches still very much playing a part it wasn’t ideal for anyone least of all a rider coming back after nine months on the sidelines, but as the final few flashes of pace emerged in the last few minutes, Marquez most definitely had speed. Cranking it up to take over at the top with only moments remaining, it seemed like the fairy tale initial headline could be about to come true. But no, Rins first and next Viñales did enough to deny the eight-time World Champion by a couple of tenths.

FP2 similarly bubbled to a fast lap mad dash, although with the weather expected to remain pretty fair for the rest of the weekend – and conditions not changing as much as Qatar – there was a little less fervour than what we saw a couple of weeks ago. Nevertheless, there were some solid time attacks and Marquez was back amongst it. He ran off at Turn 1 and had a couple of twitches on his way to sixth, but a threat at the front he seems to remain… Jaws music, anyone?

Between Mir in third and Marquez in sixth, Rins slots into fourth as both Team Suzuki Ecstar machines enjoyed a good start to the weekend, looking to make amends for a difficult GP on the Algarve last year. Jack Miller (Ducati Lenovo Team), despite arm pump surgery ahead of the weekend, was fifth on Friday as he returns to the venue of his most recent podium, and the Aussie was only 0.008 off Rins ahead of him. Marc Marquez’ sixth, meanwhile, was decided by just 0.003 as Miller pipped him by the smallest of margins.

Viñales, after topping FP1, was seventh and 0.560 off the top, ahead of top Independent Team rider Johann Zarco (Pramac Racing) by just 0.064. Championship leader Zarco had an interesting end to the day as he suffered a mechanical problem on a practice start and pulled off the track as his bike began to smoke slightly, luckily finding himself in range of a Miller Taxi service as the Australian picked him up and let the Frenchman ride pillion back to the pits.

Home hero now and last year as he destroyed the field on his way to the win from pole, Miguel Oliveira (Red Bull KTM Factory Racing) begins the 2021 edition in P9, and within provisional reach of Q2. The last rider currently on to join him is Takaaki Nakagami (LCR Honda Idemitsu), the Japanese rider sneaking in late on despite a monumental crash earlier in FP2. Coming off on the way into Turn 1, the number 30 slid across the run off at speed and is feeling a little sore but was back out later in the session.

Alex Marquez (Repsol Honda Team) was the rider just denied by his teammate’s last push for the top ten as he ends the day in P11, with Pol Espargaro (Repsol Honda Team) shuffled down to P12 by just 0.011 despite having shown a stronger start to the day, only four thousandths off teammate Marquez in FP1. The top rookie was Luca Marini (Sky VR46 Avintia) as the Italian moved into a provisional top ten and then got shuffled down a few places to a nevertheless still impressive P13, just 0.013 off Pol Espargaro. Aleix Espargaro (Aprilia Racing Team Gresini), meanwhile, was 14th and a tenth and a half further back, with Valentino Rossi completing the fastest fifteen on Friday after a tougher day for the Italian and his teammate Franco Morbidelli, who was P19.

Clouds remain overhead but the forecast says they don’t threaten any more rain. So will the first European schedule FP3 be a classic all-out shoot out for Q2? Find out on Saturday morning from 9:55 (GMT +1), before qualifying from 14:10 to decide the grid for the Grande Premio 888 de Portugal. Last year it was Oliveira on pole, but this year the grid are already within a second of that on Friday… will history repeat itself?