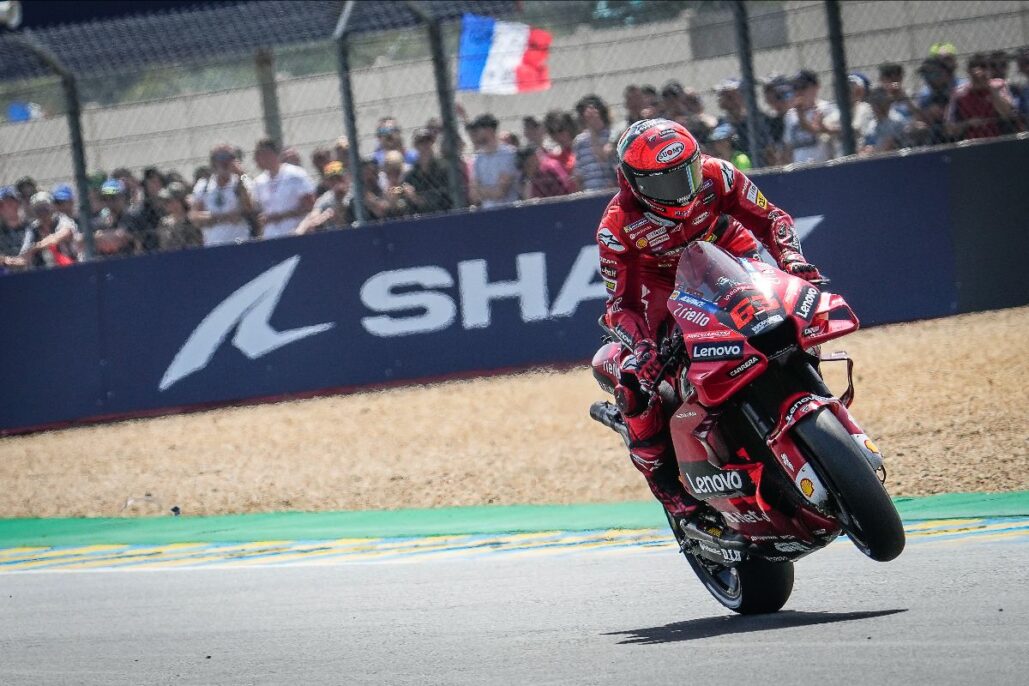 A magnificent performance from Francesco Bagnaia at the SHARK Grand Prix de France saw him secure consecutive MotoGP™ pole positions for the first time this season, and with a new All Time Lap Record to boot. His 1:30.450 is the fastest two-wheeled lap seen around Le Mans and it also gives Ducati their first pole at the venue.

It’s double delight for the Ducati Lenovo Team too, with Jack Miller joining his teammate on the front row and Aprilia’s Aleix Espargaro’s remarkable run of form continuing as the number 41 takes a third consecutive front row.

French favourites Fabio Quartararo (Monster Energy Yamaha MotoGP™) and Johann Zarco (Pramac Racing) had slightly tougher Saturdays. Quartararo will start fourth after getting pipped to the front row, and Zarco qualified sixth but has a 3-place grid penalty for disturbing another rider in Q2.

Q1
Having missed the top 10 cut in Free Practice, Jorge Martin (Pramac Racing) and Joan Mir (Team Suzuki Ecstar) navigated through Q1 to take their places in the battle for pole, with Marco Bezzecchi (Mooney VR46 Racing Team) denied by just 0.007. Red Bull KTM Factory Racing had a tough day at the office too, with Brad Binder and Miguel Oliveira both missing the cut.

Q2
The first runs gave us our first Bagnaia and Quartararo showdown of the weekend. Both riders were keen to get a banker lap in early, and it was the Italian who struck first with an impressive 1:30.6 to sit on top. However, it didn’t take long for Quartararo to get the French fans on their feet as he responded by going 0.011s quicker on his next attempt. As the riders returned to their boxes, Round 1 had fallen the way of the reigning World Champion

As riders returned to the tarmac, they began to close the gap to the top. Zarco was the first to improve and put himself on the front row provisionally, while Enea Bastianini (Gresini Racing MotoGP™) had gone under Bagnaia’s pace-setting time in the first three sectors. Unfortunately for the two-time premier class race winner, his effort fell just short as he replaced Zarco in P3.

As the session ticked down, Bagnaia upped his game once more, posting a rapid lap to break the All Time Lap Record in Le Mans as well as towing teammate Miller into the top two. Moments later, Aleix Espargaro joined them on the front row after a blistering effort from the RS-GP, and all eyes were now on Quartararo.

The pressure was on the Yamaha rider, and despite a clean two first sectors on his final time attack, he lost time in the third before losing even more completely in the fourth, leaving him with a P4 start come lights out. He’ll be joined on the second row by Bastianini in P5, and after Zarco’s penalty the Frenchman drops to P9, with Mir moving up to take sixth on the grid.

The Grid
The two Ducatis head the Aprilia, with Quartararo keen to push on from fourth. Bastianini was top Independent too, ahead of Mir now gaining a row as well as a place.

It was frustration for the Repsol Hondas as Marc Marquez rolled out of his time attack, while Pol Espargaro was the rider affected by Zarco being slow on the racing line. They will line up in P10 and P11 respectively, with Independent Team counterpart Takaaki Nakagami (LCR Honda Idemitsu) completing the top 12.

The stage is set for a true spectacle on Sunday and the gauntlet is thrown down. Can Quartararo take that home glory or will he be denied? We’ll find out at 14:00 (GMT +2) as the lights go out for the SHARK Grand Prix de France. Don’t miss it!

Francesco Bagnaia: “I’m very happy. In FP4, I was struggling a lot to stop the bike and I was a bit scared about qualifying. But then, thanks to my team, we made a little change to the setting and it helped me to be faster and more competitive. It’s my first MotoGP pole in Le Mans, so I’m very happy.”