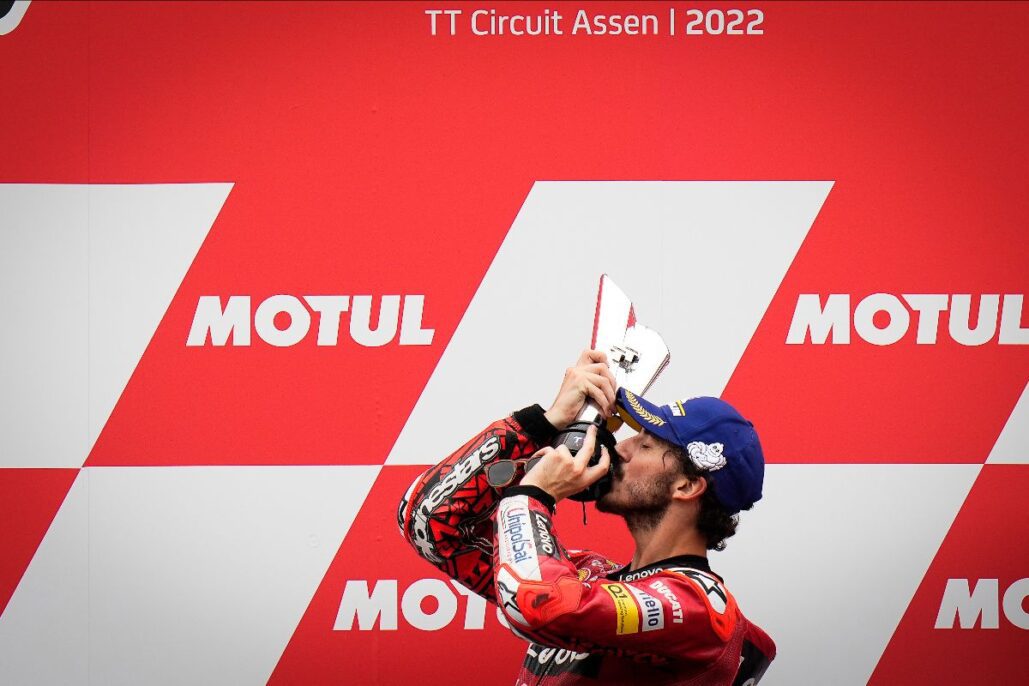 Quartararo crashes, Aleix Espargaro fights back, Bezzecchi takes a maiden podium and Viñales returns to the rostrum behind a 25-point haul for Bagnaia.

Ducati Lenovo Team’s Francesco Bagnaia blasted back into serious MotoGP™ title contention with victory in a wild Motul TT Assen. World Championship leader Fabio Quartararo (Monster Energy Yamaha MotoGP™) clashed with his nearest rival in the points table, Aleix Espargaro (Aprilia Racing), early on and crashed out – and the incident also left Espargaro down in P15 and facing a fight back. But fight back he did and that as Quartararo crashed again later in the race, the Frenchman ultimately taking home a nil points and a Long Lap penalty for the Monster Energy British Grand Prix after summer break for the overly ambitious move.

Meanwhile, Marco Bezzecchi (Mooney VR46 Racing Team) put in a stunner to follow Bagnaia home with some breathing space and take his first premier class podium, with Maverick Viñales (Aprilia Racing) shooting up from P11 on the grid to third, visiting parc ferme with Aprilia for the first time. And did we mention Aleix Espargaro’s 2-for-1 on Brad Binder (Red Bull KTM Factory Racing) and Jack Miller (Ducati Lenovo Team) at the final chicane for fourth?!

Rewinding to before all that, Bagnaia launched well and led the field into the first corner, while Quartararo briefly dropped back to fourth when he ran wide as he tried to go with the pole-sitter. He quickly re-passed Jorge Martin (Prima Pramac Racing) and also went down the inside of Espargaro at De Strubben, but then couldn’t keep the RS-GP behind him when they ran up the back straight.

Bagnaia had 0.7 in hand at the end of the first lap, by which time Bezzecchi had passed Miller for fifth, and the rookie was into fourth when he overtook Martin at the start of Lap 3. Miller then dropped from sixth to 10th on Lap 4 when he served his Long Lap Penalty for irresponsible riding in Q2, facing his own comeback.

On Lap 5 though, it was high drama at Turn 5 as the top two in the World Championship came together. Quartararo looked to make a move on Espargaro but dropped his Yamaha and slid into the Aprilia, no saving it. The Frenchman was last by the time he had remounted, and while Espargaro did well to stay upright and avoid a crash, he still plummeted to 15th and was facing one serious Sunday fight back from the gravel.

That left Bezzecchi in second, with Bagnaia’s advantage over the field out to 1.3 seconds and Martin holding third ahead of Binder. The South African was back to fifth when he was overtaken by Viñales as they ran through the Ossebroeken complex on Lap 10, however, with the number 12 on a charge.

A few laps later, De Strubben then bit Quartararo again – hard. The Frenchman had already dropped off the lead lap after a visit to the pits before he fell off for a second time once back out, highsiding on the exit of the slow left-hander. Thankfully, Quartararo got onto his feet and was given the all clear, having adding no injury to the insult of two crashes.

Meanwhile, Bagnaia continued to lead as Espargaro mounted his fightback. The Spaniard was already closing in on the battle for ninth between Zarco and Joan Mir (Team Suzuki Ecstar) when, a couple of positions ahead, Takaaki Nakagami (LCR Honda Idemitsu) was then given a Long Lap Penalty for exceeding track limits, promoting #41 to the top ten. And there was plenty more to come.

Virtually the only thing that hadn’t happened by that stage was rain, but it soon started falling as well. Rain flags and then the white flag, signalling that riders were allowed to change bikes, started to wave, but it never got heavy enough to force them to do so. Still, it made for a tricky period in the race, as Viñales passed Martin for third at the Geert Timmer Chicane on Lap 17, then both Binder and Miller overtook the Pramac rider on the next lap.

For the second weekend in a row, Miller was doing an admirable job of recovering from a Long Lap Penalty, passing Binder for fourth at the start of Lap 21 and wasting little time in closing up to Viñales as he sought consecutive podiums. He looked to have made the move at the Timmer Chicane at the end of Lap 25, but was in a bit too hot and had to bail out of it, which put him back under pressure from Binder.

Up ahead and free of all the mayhem, however, Bagnaia cruised to victory. He eased off at the end, with the winning margin officially only 0.444 seconds after 26 remarkable laps, but it never seriously looked in doubt. Bezzecchi sent the VR46 team into raptures with his first premier class podium, and Viñales was less than a second further back in third after escaping the clutches of Miller.

Aleix Espargaro, meanwhile, wasn’t done. The Aprilia rider had risen to sixth and that looked like an admirable salvage job, but then he divebombed Miller and Binder as they ran into the Timmer Chicane for the final time – and pulled it off with such perfection it’s a contender for move of the year, decade or maybe more.

Fourth snatched away, Brad Binder would take fifth, ahead of Miller, Martin, and Mir. Mir had a couple of close brushes after contact with Miguel Oliveira (Red Bull KTM Factory Racing) as they lined up on the grid before a clash with Luca Marini (Mooney VR46 Racing Team) once the race had actually started. Oliveira shed bodywork in that incident but still finished ninth, ahead of Alex Rins (Team Suzuki Ecstar), Enea Bastianini (Gresini Racing MotoGP™), Nakagami, Zarco, Fabio Di Giannantonio (Gresini Racing MotoGP™), and Alex Marquez (LCR Honda Castrol) in the final points position.

Now though, the MotoGP™ paddock now has the summer break to catch its breath before Round 12. The Monster Energy British Grand Prix descends on Silverstone from the 5th to the 7th of August, and there’s absolutely everything to play for. Join us for more as MotoGP™ returns at full throttle!

Francesco Bagnaia: “It felt long, very long. The first time I looked at how many laps were remaining, it was 24, so I’d just done two laps and it was too long. In any case, I’m so happy; so happy after two difficult races, when we were always competitive but without any results, so it’s incredible. I’m so happy, we did an incredible job. It wasn’t easy because, halfway through the race, it started raining a bit, and it was very scary, but finally I won here. That means to me that we are very good, we are strong.”