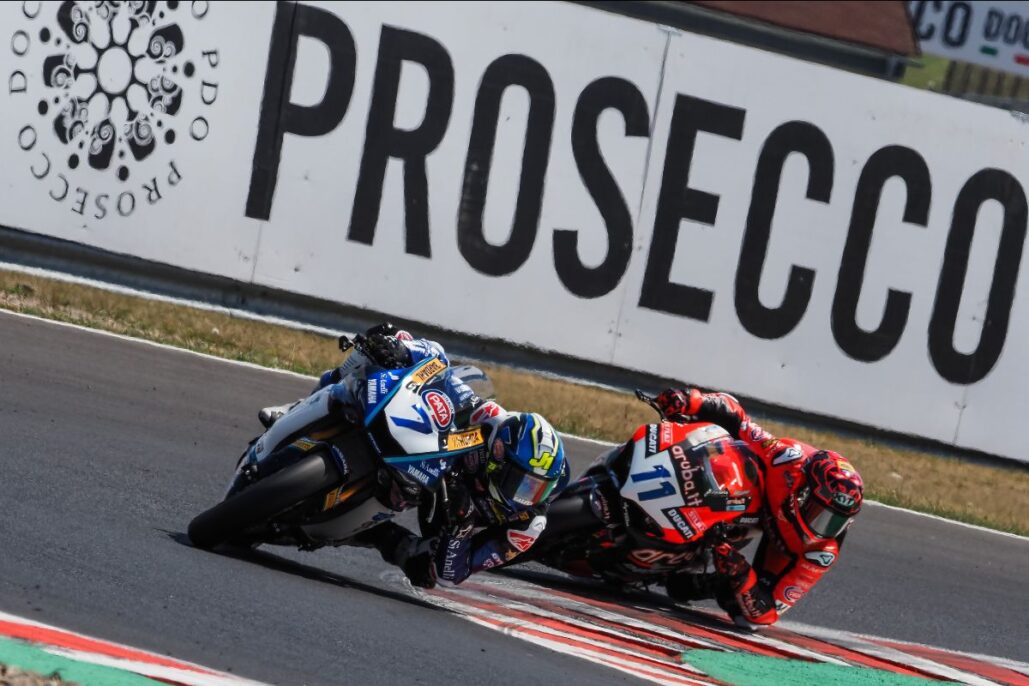 The top five was formed by five manufacturers for the first time since 2007.

“It was a perfect weekend for me. Yesterday, I took pole position and the win, and today we win again. We needed it. Thanks to my team, they worked really hard since Friday. We did a really great job and we have to continue like this, to remain focused because Aegerter is very strong this year. The other bikes are getting stronger, and they start to be fast as well. We know we are fast and that we can win. The second part of the season will be interesting. This weekend was very important for the Championship.”

“I lead most of the race, so it was a very good race. I had Baldassarri behind me. I was at 110% to stay in front, but when he passed me, I understood he had 10% extra in his pocket. I wasn’t able to follow him, he was very fast and I nearly crashed straight after he passed me. But anyway, I’m happy with this second place, it’s my best result this year. It was a difficult track for our bike but in the end, we’re on the podium after yesterday when it was difficult to stay with the leading group.”

“I’m very happy. Today I also had to start from 20th position, I gained one position from the unlucky crash of Aegerter. It was very difficult to overtake that many riders in the first lap. But then I could take my race pace that was good from this morning in the warm-up. Then, I could recover many positions, before making a mistake which almost made me crash. The race was stopped with 4 laps to go when I was already third.”

Can Oncu (Kawasaki Puccetti Racing) finished in fourth place ahead of Turkish compatriot Bahattin Sofuoglu (MV Agusta Reparto Corse) in fifth; with the rookie taking his best result in WorldSSP to date and founding himself in the podium fight. Federico Caricasulo (Althea Racing) finished sixth after fighting for a podium throughout the race conditions. With Oncu in fourth and Sofuoglu in fifth, all five manufacturers finished in the top five for the first time since Monza 2007.

To note:
Race 2 in the FIM Supersport World Championship was red-flagged on Lap 16 after a crash for Steven Odendaal (Kallio Racing). Odendaal’s bike was on the exit of Turn 21, and there was also oil on the circuit, with the red flag being deployed for the track.

Following an investigation, FIM Stewards ruled that Aegerter acted in an unsporting manner by simulating a medical situation in order to delay the recovery process and thus force a stoppage of the race by red flag. This is something that the 31-year-old Swiss rider admitted to with a supporting statement, submitted to the FIM Stewards. For his unsporting behaviour, he has been given an immediate one race ban, which means he will not take part in Race 2 at Most.

After clarifications of yesterday’s behaviour to the Chief Medical Officer of the circuit and the subsequent further medical assessments and examinations that have been made, it is declared that Dominique Aegerter would have been fit to race but will not take part due to the FIM Stewards’ ruling.