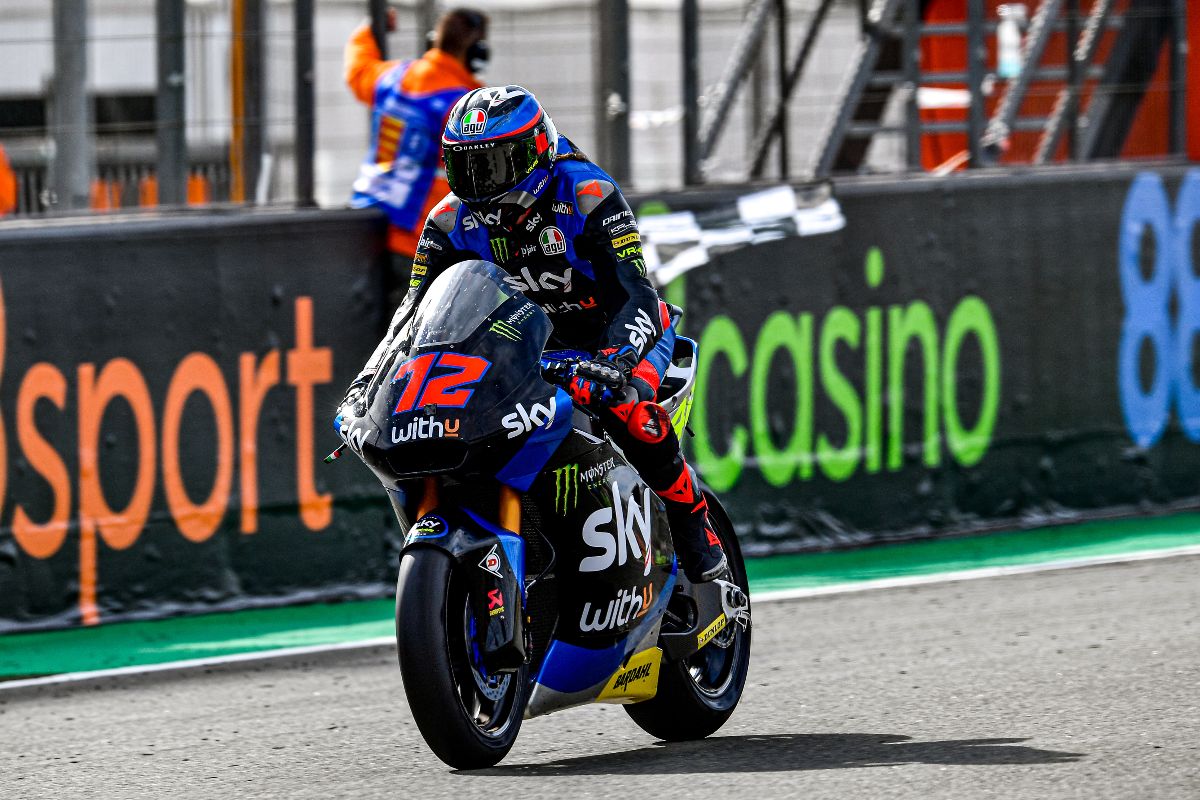 The Brit crashed, the Italian capitalised… and so did third overall Marini. What awaits on take two?

From record-breaking wins in a row to a crash, the Europe GP ensured Sam Lowes’ (EG 0,0 Marc VDS) has now had a rollercoaster few races. And with that, it’s Enea Bastianini (Italtrans Racing Team) back on top in the standings as the Italian did some solid damage control after qualifying 15th, coming home fourth to take back the lead. Luca Marini (Sky Racing Team VR46), after some tougher races, put in a solid performance too – taking sixth to keep himself in the hunt, now 19 points back with 50 on the table. So what awaits on take two at Valencia?

Lowes, despite the mistake, was the man with the best pace of the top three in the title fight – and he crashed out of a podium position. So if the Brit can keep calm and carry on, there should be a solid chance to hit back and keep the fight rolling to the season finale. But Bastianini seems unflappable and now has a whole race of data under his belt – valuable indeed after a weekend of mixed conditions and then a dry race. He’ll also have a first shot at the crown…

Marini is also back in the hunt, however, as he took the first important step towards reversing his negative momentum. Sixth isn’t the wins he’s already taken this year, but it’s both good points and a good finish to calm his nerves. The pressure is less than it was, so can he move further forward this time around? He’ll need to if a real challenge is to come in Portimão.

The man with the serious speed last time out though was Marini’s teammate Marco Bezzecchi (Sky Racing Team VR46). He needed an ace card to stay in the title fight and the Italian played one in style as he dominated the race, putting him 29 points off the top. Can he do it again? Will Lowes, Bastianini or Marini have an answer? Or can the riders just behind him catch him with a little more track time?

Those riders were Jorge Martin (Red Bull KTM Ajo) in second and Remy Gardner (ONEXOX TKKR SAG Team) in third, and they can’t be counted out from challenging again either. The title is now mathematically over for them, so it’s gloves off and no pressure – and no stake in who they’re overtaking or when.

Bastianini has his first longer shot at the title this weekend, but it’s likely far from a done deal with his rivals still very much in touch. Can Lowes, Marini and Bezzecchi pull something out the bag again? Or is ‘Beast’ mode on? Find out on Sunday at 12:20 (GMT +1) as the lights go out for Moto2™.