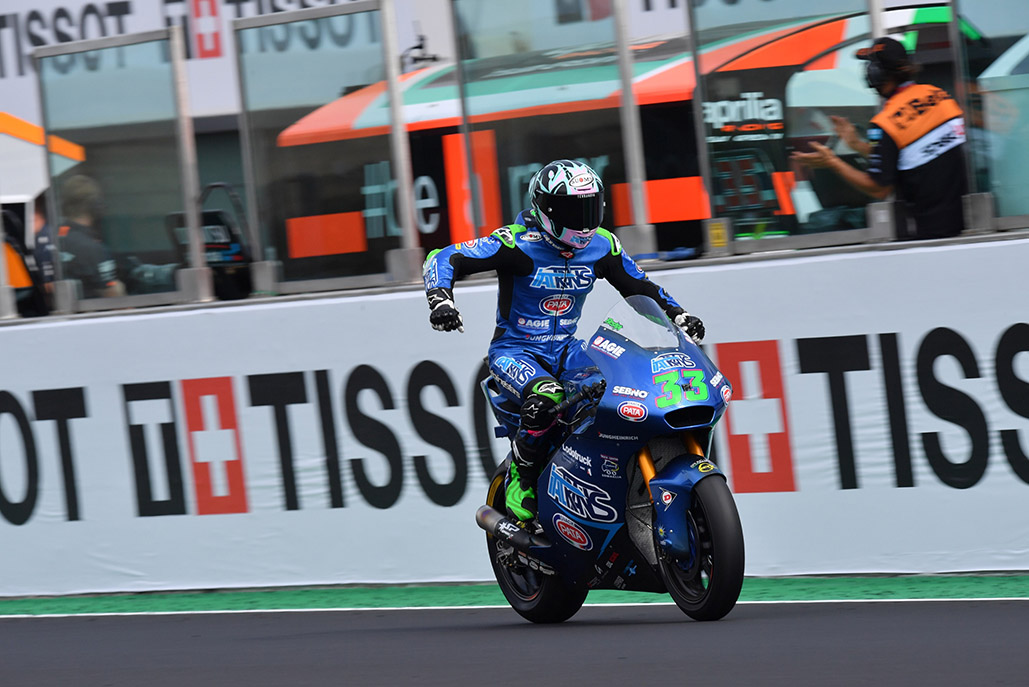 Three – almost – starts and some rain playing havoc couldn’t stop the ‘Beast’, with Bezzecchi and Lowes completing the podium.

Italtrans Racing Team’s Enea Bastianini clinched an impressive Moto2™ victory at Misano after rain played havoc at the Gran Premio TISSOT dell’Emilia Romagna e della Riviera di Rimini. Red flags were brought out after just seven laps as the heavens opened but, from the restart, and back in the dry, the ultra-aggressive Bastianini bolted clear to take the win ahead of Sky Racing Team VR46’s Marco Bezzecchi and EG 0,0 Marc VDS’ Sam Lowes. With his victory, the ‘Beast’ cut Luca Marini’s (Sky Racing Team VR46) title lead down to just five points.

On the first start it was Petronas Sprinta Racing’s Xavi Vierge managing to squeeze his way into the lead pat Marini and the hit the front of a Moto2™ race for the first time in 2020, with a strong start coming in from his Petronas Sprinta Racing teammate too as Jake Dixon settled into fifth. The Italians suffered a few dramas in the early shuffles, but the biggest drama was about to come down as rain started and the flag came out to let the riders know. By then, Bastianini had muscled to the front and started to bolt despite the worsening weather, but the Red Flag came out not long after.

The riders filtered into pitlane and a ten lap restart was announced, but as the grid reformed, with everyone on slicks, the rain suddenly got heavier again. As the Moto2™ field set off on their Warm Up lap, the entire grid instantly pointed skywards and began wagging fingers to signal it was far too wet for the race to start. The rain eventually subsided and, after a short delay, a dry-ish 10 lap dash was back underway – with Bastianini on pole as the grid formed up based on standings before the flag.

Lights out for the second time saw Marini take control into Turn 1, and Bastianini settling in behind him. The Beast struck immediately though at Turn 4, sending the pair wide and giving Vierge chance to pounce. The Spaniard took the lead and Marini lost out big time with his fellow Italian’s move dropping him back to fifth. Bastianini then hit the front at the end of the opening lap, and the plan appeared the same: BOLT.

The Italian made the most of Vierge and Marcel Schrötter (Dynavolt Intact GP) battling over second and didn’t need a second invitation, stretching his lead out to over a second after two laps.

Next, Marini lost out to Bezzecchi for fourth place and then got beaten up by Sam Lowes over fifth place, with valuable points slipping through the fingers of the Championship leader. Meanwhile, an incredible fight was ensuing between Vierge and Schrötter, the German moving through into Turn 7 and on the exit the pair were side by side, bashing elbows for good measure. Some more contact then saw Vierge crash out, with Schrötter dropping back to fourth and then fifth as Marini sliced with his way past. Lowes found himself up to third too, trying to go with the fastest man on the track with three laps left: Marco Bezzecchi.

He was eight tenths quicker than Bastianini and suddenly, just like a week ago, Bezzecchi was hunting down the race leader at some rate. By two laps to go it was seven tenths separating the two Italians at the front of the race, with Bezzecchi visibly throwing everything at it and Lowes in close company too. As they started the final lap, it was just half a second between the leading duo.

Despite the mounting pressure, Bastianini remained calm and didn’t fold, however, crossing the line seven tenths clear to take a third intermediate class win of 2020, and his second GP win at Misano. Bezzecchi came across the line in P2 for a third consecutive top three finish, even more closely followed by Sam Lowes. Marini, meanwhile, took 13 points in fourth place and kept hold of his World Championship lead. But only just, with Bastianini now only five points adrift and breathing down his neck heading to Barcelona next weekend…

Schrötter took fifth after his earlier dramas, with Jake Dixon the next man over the line after getting the better of Jorge Navarro (Beta Tools Speed Up) by three tenths. That’s Dixon’s best ever Grand Prix result and after an impressive fight for it, in the dry to boot. Rounding out the top ten were Fabio Di Giannantonio (Beta Tools Speed Up), Tom Lüthi (Dynavolt Intact GP) and Hector Garzo (FlexBox HP40), who jumped up following a one place penalty for Nicolo Bulega (Federal Oil Gresini Moto2) for exceeding track limits on the final lap.

Joe Roberts (Tennor American Racing) crashed before the restart in a monster high side, rider ok.

That’s it for Moto2™ at Misano, and it’s just five points in it on the road to Barcelona. Will we see a change of lead there? Find out next weekend!

Enea Bastianini: “I’m really happy to be here in first place, today was a strange race because we stopped twice but after I kept good pace in the third race and it was possible to keep a bit of distance from Marco. I put the soft rear tyre on, and it was pushing a bit more on the front and Marco was really close the last two laps! But I’m happy for this victory for my team and my family, and in my town… it’s incredible!”

The morning after the night before