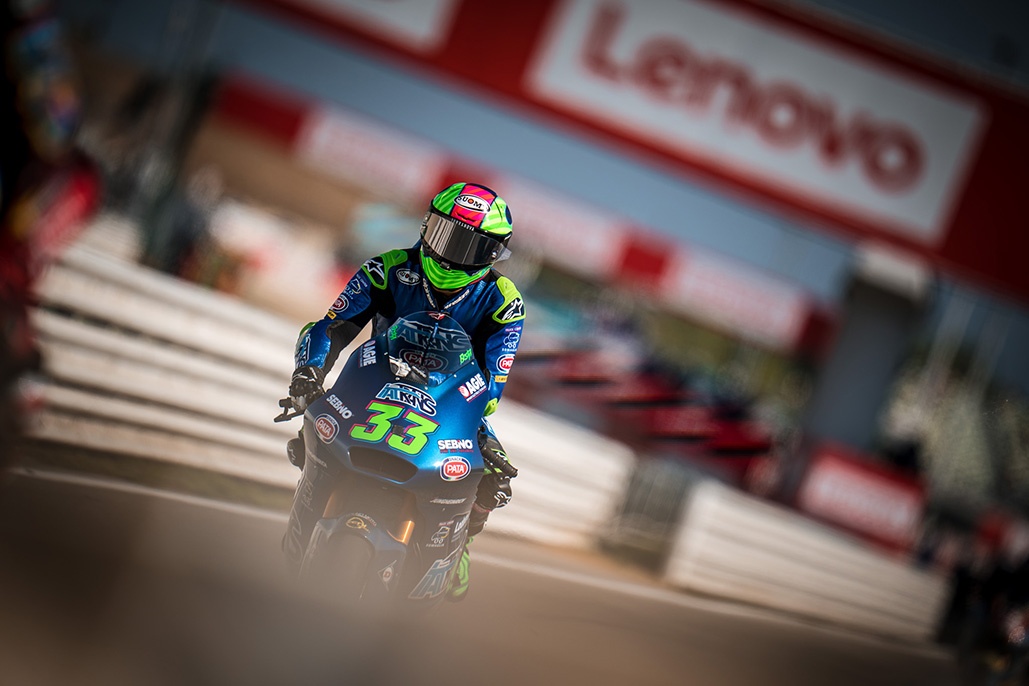 The Beast is back and he beats the Brit to the top by half a tenth, with 2019 Misano winner Fernandez taking third.

Enea Bastianini (Italtrans Racing Team) took back to the top on Day 1 of the Gran Premio Lenovo di San Marino e della Riviera di Rimini, putting in a 1:36.933 to pip Sam Lowes (EG 0,0 Marc VDS) to the honour by half a tenth. The top three was completed by last year’s winner and Lowes’ teammate Augusto Fernandez, with the Spaniard still within just over a tenth of the top.

FP1
A 1:37.245 in FP1 – 1.3 seconds faster than the quickest effort in FP1 last year – put Sam Lowes in P1 in the morning, with the Brit beating Championship leader and local hero Luca Marini (Sky Racing Team VR46) to the top by a couple of tenths. Marini’s teammate and Styrian GP winner Marco Bezzecchi was next up; another Italian in the top three and only another tenth in arrears.

Marcel Schrötter (Liqui Moly Intact GP) took fourth, just 0.088 ahead of the third home hero in the top five as Bastianini started his home GP off in P5 – with more to come…

Remy Gardner (ONEXOX TKKR SAG Team) took a tumble at Turn 16, before Fernandez then went down at Turn 1. Schrötter also crashed, the German heading down at Turn 14, before Jake Dixon (Petronas Sprinta Racing) ran afoul of the same corner towards the end of the session.

FP2
In the afternoon, the ‘Beast’ struck back. Bastianini turned the tables to lead Lowes by 0.059 in the session, as well as beat the Brit’s fastest lap from the morning. Although the top six all managed that, too, as the times tumbled in FP2. Last year’s winner Fernandez was only another tiny margin behind, this time 0.056.

Nicolo Bulega (Federal Oil Gresini Moto2) moved up to fourth in the afternoon, with Marini taking the final place in the top five.

There were two crashes in FP2: Schrötter went down again, and again at Turn 14, before Xavi Vierge (Petronas Sprinta Racing) took a tumble in the same place a few minutes later.

On the combined timesheets, it’s almost a mirror image of FP2 barring Jesko Raffin (NTS RW Racing GP) as the Swiss rider brought up the rear on his return from injury and was unable to improve in the afternoon. Bastianini leads Lowes, Fernandez, Bulega and Marini, with Fabio Di Giannantonio (+Ego Speed Up) in P6 as last year’s second place finisher got back on the pace – just 0.032 off Marini.

Hafizh Syahrin (Oceanica Aspar Team Moto2) impressed in seventh as he comes back from injuries sustained in the headline-making Austrian GP crash, the second Speed Up in the top ten, and Jorge Navarro (+Ego Speed Up) made it three for the factory as he took P9 overall. Schrötter completed the top ten despite his two offs on Friday.

Rookie Aron Canet (Oceanica Aspar Team Moto2) was only just off that top ten in P11, ahead of Tetsuta Nagashima (Red Bull KTM Ajo) as the Japanese rider was a more muted presence on Friday. Vierge and Joe Roberts (Tennor American Racing) are currently the last two on to move directly to Q2, but everything can still change on Saturday. With Lowes starting from pitlane due to a penalty, it could essentially end up for a fight for the top 13 on the grid, too.

FP3 is the final chance for the Moto2™ field to move straight through to Q2, and it begins at 10:55 on Saturday morning. Qualifying then starts at 15:10, so don’t miss it!