Enea Bastianini tops both sessions on Friday to dominate proceedings on the opening day of practice at the Gran Premio Movistar de Aragón.

Gresini Racing Team Moto3’s Bastianini was on fire at MotorLand Aragon as he aims to close the 55-point gap to Danny Kent in the standings. The 17-year-old Italian continued the form that saw him take his maiden Moto3™ victory last time out at Misano to set a 1’58.875 in the warmer afternoon session. This was only half a second off Alex Rins’ Pole Record from last year (1’53.296) on a day that saw less than a second separate the top 15 riders. Even a crash at the end of FP2 didn’t dampen Bastianini’s spirits after an excellent day for the man in second place in the Moto3™ World Championship.

Red Bull KTM Ajo’s Miguel Oliveira was just 0.018s off the pace of Bastianini in second, as he continues to benefit from the new KTM chassis and swingarm that debuted in Misano. Jorge Navarro showed no ill effects from the crash in FP1 at the San Marino GP that forced him to miss the rest of the weekend as he set the third fastest time on his return to the track. Incredibly, he was just one thousandth of a second further back than Oliveira, as 0.019s separated the provisional front row.

Sena Yamada is substituting for the injured Fabio Quartararo in the Estrella Galicia 0,0 team and acquitted himself well in 21st. Scotsman John McPhee (SAXORINT RTG) ended the day in 30th.

FP3 starts at 9:00am local time on Saturday in Aragon. 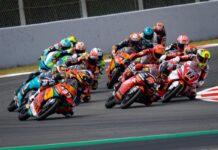 Moto3: can Garcia keep it full GASGAS in Germany? 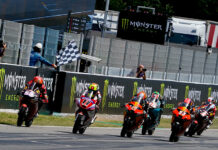 Garcia battles to second win of the season in Barcelona