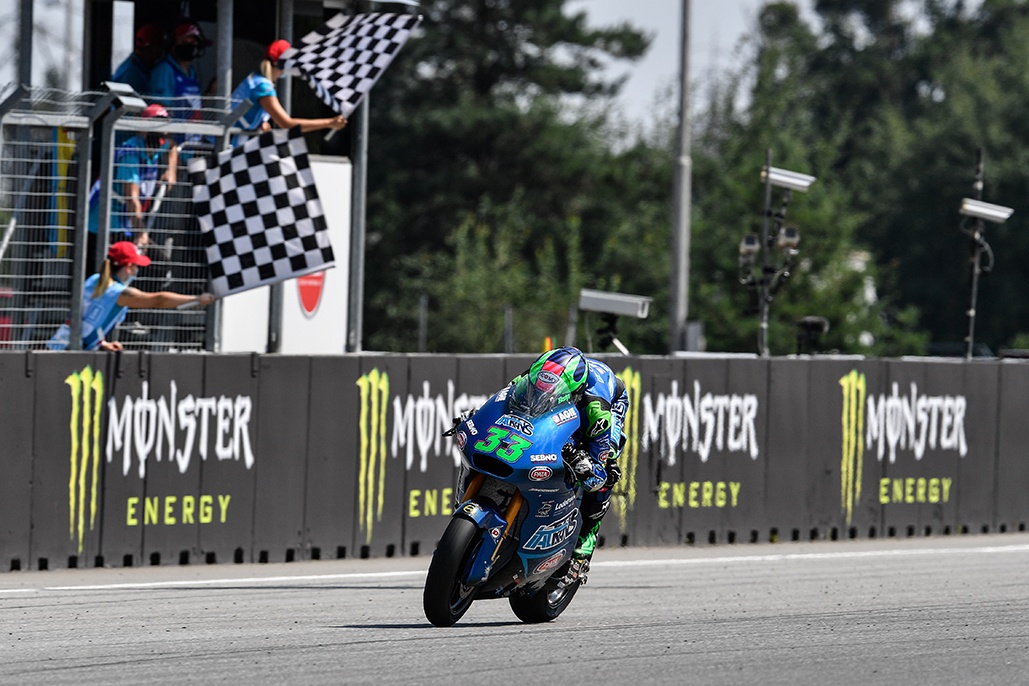 The Italian stamps some more authority on the standings, the Brit is back on the box, and the American puts the Stars and Stripes on a GP podium for the first time since 2011.

Italtrans Racing Team’s Enea Bastianini produced perfection again in order to claim his second lights-to-flag victory in as many races at the Monster Energy Czech Republic Grand Prix, but the Italian was under pressure throughout the race from EG 0,0 Marc VDS’ Sam Lowes. The Briton eventually had to settle for second, but it was his first trip to a Grand Prix podium since Aragon 2016. Third on the podium was a career first Grand Prix rostrum for Tennor American Racing’s Joe Roberts as the American converted pole into some serious points and an impressive milestone.

Roberts was forced into second off of the line after Bastianini, starting third, got the best launch and took a commanding holeshot. Red Bull KTM Ajo’s Jorge Martin was quickly involved in the action after he edged his way past Roberts for second too, but it was extremely short-lived as the American replied immediately with a lunge back through. Lowes then began to find his rhythm though, and in the space of a lap had sliced his way past both Martin and Roberts, setting his sights on Bastianini at the front of the race.

The Italian’s pace at the front was simply too much for the vast majority of the grid. Bastianini was 0.9 seconds clear of Lowes, whilst Lowes was now a second clear of Roberts, who himself had managed to dispose of Martin. Despite the top three breaking clear though, the fight for fourth place was beginning to hot up with Spanish Grand Prix winner Luca Marini (Sky Racing Team VR46) coming through from tenth on the grid to slice past teammate Marco Bezzecchi (Sky Racing Team VR46), Augusto Fernandez (EG 0,0 Marc VDS), Jorge Navarro (MB Conveyors Speed Up) and Martin.

With 13 laps to go, Lowes had cut the Andalucia Grand Prix winner’s lead to below half a second for the first time. Could the Brit find enough to close onto the tail of the Italtrans Racing man? As the laps ticked by the gap remained constant, but Bastianini was still very much under pressure and there was still time left. With five laps to go though ‘The Beast’ showed his teeth for the first time, finding something extra in the closing stages to stretch his lead out to three-quarters of a second…

With two to go, that then became a whole second, but Lowes then suddenly halved the 22-year-old’s lead on the final lap. Was a dramatic finish was potentially on the cards? Almost, but Bastianini just managed to keep the edge to the chequered flag as he won back-to-back for the first time, and took the Moto2™ World Championship lead. Lowes officially put to bed one of the most difficult periods in his career as he jumped back onto the box for the first time in four years, and the podium was completed by Roberts, who put in a solid and impressive ride to take a career first Grand Prix podium and become the first American since John Kocinski in 1993 to stand on an intermediate class rostrum.

Marini managed to cross the line in fourth to take some good points after a tougher Saturday, just ahead of Fernandez, with Bezzecchi, Navarro and Martin next up. There was then a small gap back to Hafizh Syahrin (Openbank Aspar Team) as the Malaysian found some Moto2™ form and finished inside the top ten, with his rookie teammate Aron Canet (Openbank Aspar Team) completing that top ten.

That’s a wrap from Brno and Bastianini now heads to Austria with quite the advantage at the top. Can the field hit back? Find out next weekend as we race at the Red Bull Ring.

Enea Bastianini: “This race has been really important for me to confirm the result from Jerez, and this weekend Sam was really fast and his pace was incredible, and I thought, ‘ok I should stay behind him and if possible try to overtake’, but I started very well and I pushed my best to stay at the front. Then the gap was really close all race, and I thought ‘ok, this race I’m second’. But finally the last five laps I could push to take this victory. I’m really happy for the team, this result is really important, but congrats to Sam and congrats to Joe as well.”