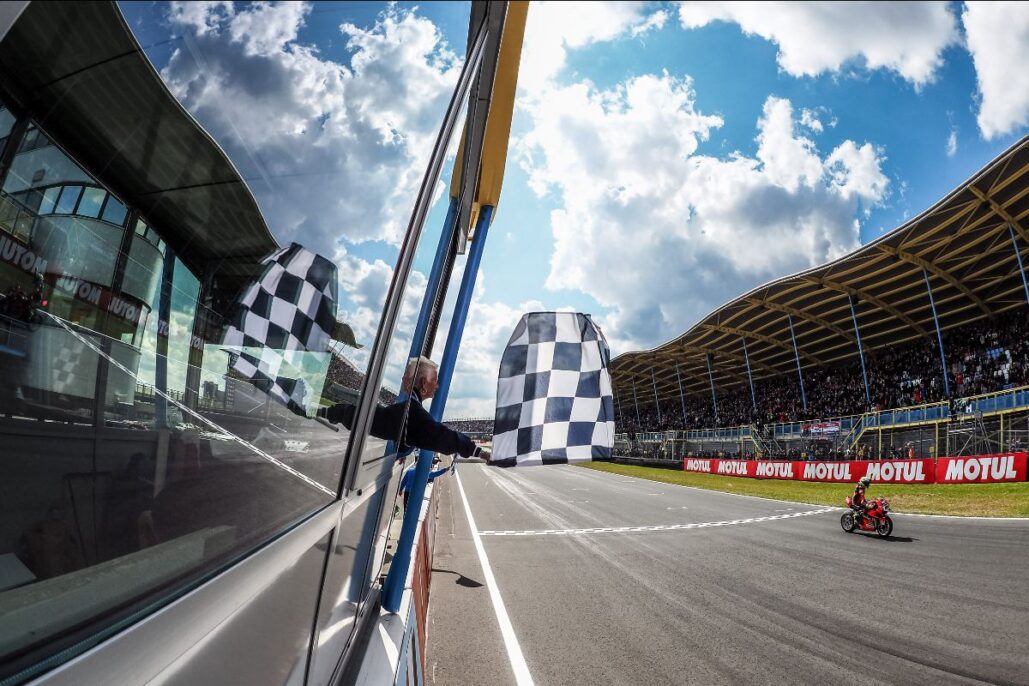 The Spanish rider claimed the Championship lead with victory in Race 2 ahead of Locatelli and Lecuona.

Fighting at the front in the early laps of the race, Toprak Razgatlioglu (Pata Yamaha with Brixx WorldSBK) and Jonathan Rea (Kawasaki Racing Team WorldSBK) battled with Alvaro Bautista (Aruba.it Racing – Ducati) but it came to an early end on Lap 6. Razgatlioglu ran wide at the right-hander, but remained on track, with Rea making his way through Turn 1 shortly after. The pair collided on the exit of the corner with both riders being forced to retire from the race, leaving Bautista to take the win.

Bautista was able to pull away at the front of the field to win by 8.7s ahead of Locatelli. Reflecting on his victory, he said: “I was quite fast and quite consistent. I sometimes just tried to relax because I saw the gap was increasing a lot. I started to make some small mistakes, but I preferred to just keep the rhythm and concentrate until the end. Consistency is the key for this season, especially because Toprak and Jonathan are very fast. I don’t think I can win a lot of races like I did three years ago. I think this weekend has been very important for me and for my team. In Aragon, we had a different setup on the bike than the winter tests. At that time, we thought it could be good performing. Here, I struggled a lot during Friday and Saturday and today my team changed a little bit the setup. This morning, I found a good bike for me, an easy bike, and more competitive. Now, fortunately, we found one step that allows me to go faster.”

Andrea Locatelli was second after passing Lecuona on lap 18, claiming his best WorldSBK result so far. He commented: “For me it’s amazing to finish on the podium. It was our objective, and we are here, we take the points. I’m sorry for my teammate and Jonny, because they were really fast but this is the race. When I saw I had the possibility to get a podium, I tried to push. I tried to close the gap to Iker, and I could finish in front of him. Now it’s so difficult to catch up with Bautista so we need to improve a little more.”

Bautista and Locatelli were joined on the podium by Iker Lecuona (Team HRC) in third place. The Spanish Rookie claimed his first WorldSBK podium with Honda. Reacting to his first podium, he said: “I’m very happy, I didn’t expect this podium for sure. All weekend, I felt very fast and very good with the bike. I have very good feedback. I had some ups and downs during the weekend. In the first race, I finished in P5. I feel comfortable with the bike, I feel fast. In the Superpole Race, again I finished in P5 but closer to the top guys. I tried to use a bit more tyre in the first laps to make some gap with the second group. When I saw the crash with Rea and Toprak, I knew it was my opportunity to overtake Alvaro and Loca. Alvaro went very fast; I couldn’t follow him. All the race, I have a small gap to Loca but in the end I don’t have tyre because I used them in the first laps. He overtook me. I’m very happy, very excited. Thanks to the team I had two big crashes and they repaired the bike very, very fast.”

Alex Lowes (Kawasaki Racing Team WorldSBK) bounced back from technical issues in Race 1 and the Superpole Race to take fourth on Sunday afternoon after battling with Scott Redding (BMW Motorrad WorldSBK Team) and Axel Bassani (Motocorsa Racing). Redding finished in fifth place, his best finish since switching to BMW, after Bassani was given a three-second time penalty for repeatedly exceeding track limits throughout the race.

Reacting to his weekend, Lowes said: “During the weekend overall I’ve been quite fast. This has been positive, obviously qualifying in second. I’ve been unlucky in the first two races because I think we should have been able to get top five results. Today, I really struggled at the start of the race. Then I wasn’t able to stay with Locatelli. Not the way I really wanted to really ride, but fourth place is still a fourth place. We have to take the positive.”

Following his first top five for BMW, Redding said: “There was chaos in the first corner, and I got lucky to come through. I was pulling away from the guys behind, holding the gap to the guys in front and I thought maybe I could catch a bit. Then there was the crash between Jonny and Toprak. The pace in front, they just rolled the throttle. I was on the limit trying to get on the back of them. I got on the back of them and I was quite comfortable. I was able to come through on Bassani, Rinaldi, Alex and feeling quite good but literally at 110%. With a few laps to go, I got a small hole in the rear tyre on the right side, so I had no rear grip. I was tipping in and it was just coming around. I just wanted to finish. Alex passed me, Bassani passed me. We battled a bit, I tried to be defensive but there was no grip.”

After the race, both Razgatlioglu and Rea shared their point of view on the incident that took them both out of contention for the win.

Rea said: “Just a little bit frustrated. Going into T1, he completely outbraked himself and almost stopped the bike on the kerb on the outside to avoid going off track. At that point, his corner was so slow. I kept my normal line and carried on with my race if you like. You expect, especially when you know someone’s right beside you, that they’re going to be there, and he cut straight back. I understand it’s a racing accident. I was there, I was in front with track position, and I felt like myself and Toprak were also robbed of a good race.”

Razgatlioglu commented: “I tried to brake hard at the first corner and I ran a little bit wide, but I didn’t go outside the track. I’m turning also onto the racing line. I touched the kerb but I stayed on the racing line, I didn’t come back inside. I saw Jonny and he was very fast. After, we crashed. I think for me this is a racing incident. I think Jonny needs to look at me. I go a little bit wide, I stay on the track, but he’s not looking. He’s just opened the gas and we crashed together. I am surprised to crash with Jonny, normally he doesn’t make this mistake because he’s a WorldSBK legend.”

Championship leader Bautista moved 18 points clear off Rea in the standings, with Razgatlioglu in third with 64 points. 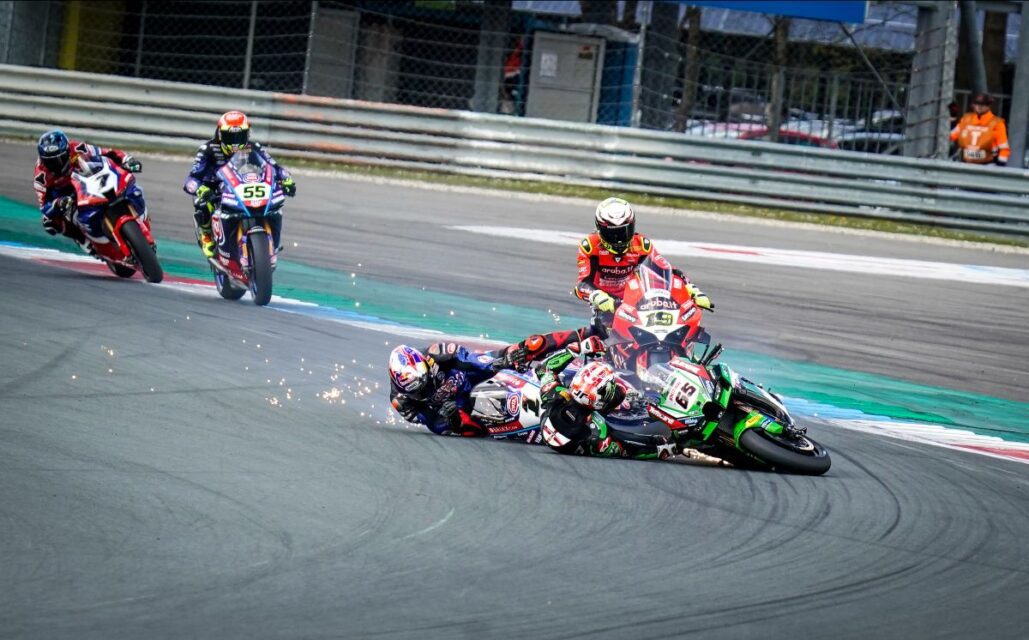 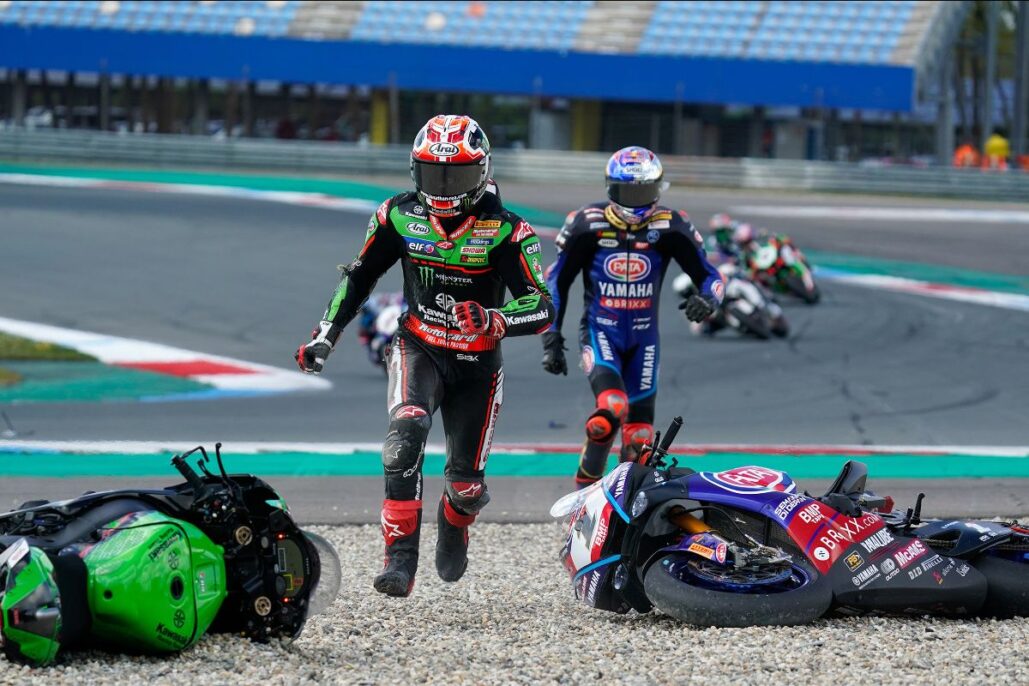