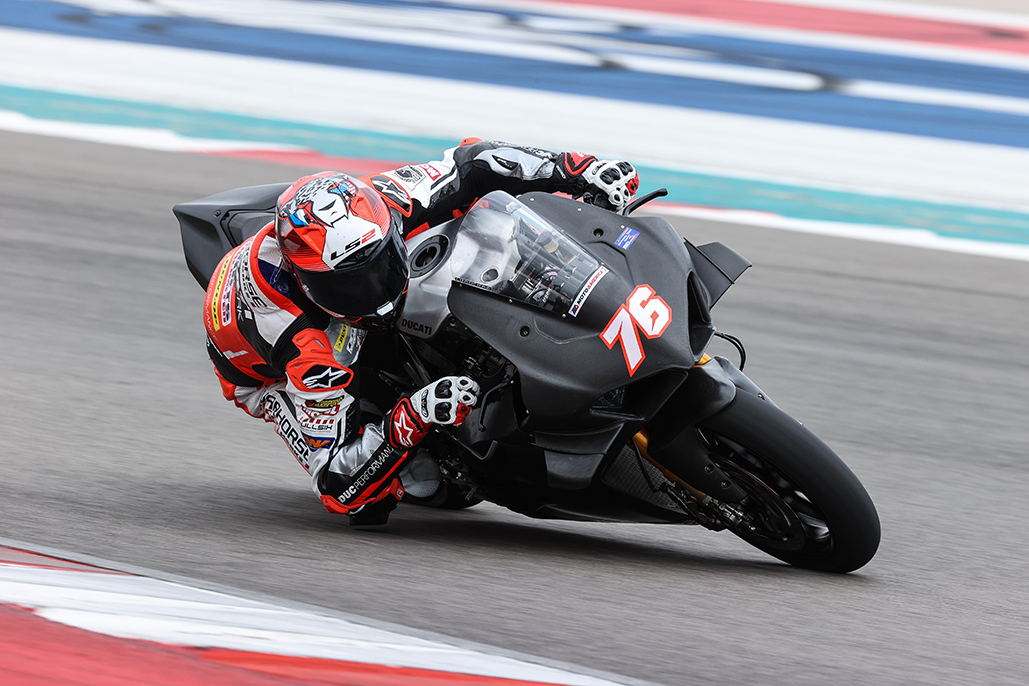 Loris Baz took very little time acclimating to his Warhorse HSBK Racing Ducati New York Panigale V4 R, the Dunlop tires and the MotoAmerica paddock today, the Frenchman leading the way with a 2:08.595 on a cloudy afternoon at the Circuit of The Americas in what was his series debut.

Baz’s best lap came in the fourth and final 45-minute session of the opening day of the two-day test, and it was .702 of a second faster than Jake Gagne, who rode the Fresh N’ Lean Attack Performance Yamaha YZF-R1. Westby Racing Yamaha’s Mathew Scholtz ended up third-quickest with his 2:09.553. Those three were the only riders to lap in the 2:09’s.

“This bike is like a wild horse,” Baz said of his Ducati. “I don’t remember the last time I’ve been so tired after day one in the preseason, but I didn’t ride a bike since the 16th of October. I haven’t done anything in the winter. I just cycled a lot and trained, but that’s not like cycling. I’m really happy because Crescent was just like a shakedown, and it was really hard to get the feeling from the Dunlop and the bike. We went through a couple of things today just to understand how the bike reacts, how the tire reacts, too, trying to get the feeling. Those tires remind me more of the ones I was using in GP than the ones I used in Superbike, the stiffness. The carcass is hard, so you have to be careful when you are off brake, but overall, I am happy. I need to go through more things and learn more the bike… maybe for the consistency. The fast lap was pretty good, and I’m happy. I think I could have improved a 10th (of a second) in the last lap because I missed my sector two, but I was too tired and when I went into turn three, my legs just did not want to turn so I say, ‘Okay, I go in the box now.’ “

Gagne was happy to be back on his bike and working with his new crew chief, former Öhlins technician and racer Jon Cornwell.

“It was a good day,” Gagne said. “It was good to get back with the whole MotoAmerica paddock for the official test. Obviously, it’s been a while since we’ve been at COTA so it’s good to be here. We got off to a good start, worked on a few little things, changed some electronic things throughout the day. We had to get some shifting stuff dialed in and just some of that early bike stuff, getting the kinks out and getting the bike a bit more comfortable. Then, in those last few sessions, we started working with the chassis a little bit. It’s great. I’ve got Corndog (Jon Cornwell) as my new crew chief and Darin Marshall is my new electronics guy. Unfortunately, he’s not here, but he’s doing all the work live on the computer. I’m really excited. This year, I have a great crew, and the races are going to be really good. There’s a lot of fast guys.”

The happiest man to be back in action was Westby Racing’s Mathew Scholtz, the South African returning to action after his crash at Indianapolis Motor Speedway that left him with a broken ankle and knee injuries.

“We obviously didn’t have much preseason testing compared to our usual standards,” Scholtz said. “Of course, the weather in Georgia has been terrible for us. At Road Atlanta we missed a whole day there and on the second day we had a little bit of bike problems, so we only did a couple of laps there. We went to Tally (Talladega Gran Prix Raceway) about two weeks back and did half a day there, so I didn’t feel definitely prepared when we came here. We started off a couple of seconds back, which was a little bit worrying, but every single session we got about a second quicker. We ended up doing a 2:09.5, which is the quickest we’ve ever been here, and we have a few ideas of where to go better tomorrow, which is really positive. It’s not like we’re scratching our heads wondering where to go, so I’m very, very happy and thank you to the Westby guys. It’s been a long, very long offseason with doing rehab and getting the foot back to health and the knee and stuff so I’m just happy to be back in the paddock racing, really. It was looking horrible last year when they started talking about fusing the foot and everything. I’m just blessed to be here and riding again. We know that Baz has a pretty decent gap, but this is the best track for that bike and probably the worst track for Yamaha. I think if we can finish here and be relatively close to Baz, it will hold us well heading into the Road Atlanta round where we know we do well.”

The first of the M4 ECSTAR Suzukis was ridden by Bobby Fong, the 2019 MotoAmerica Superbike Champion and a three-time Superbike race winner in 2020, was fourth fastest at 2:10.324 to best his teammate Cameron Petersen. Petersen was making his Superbike debut with the team and lapped at 2:10.633.

With the number-one plate proudly displayed on his HONOS Kawasaki, defending Supersport champion Richie Escalante does not seem to ascribe to the age-old axiom that “uneasy lies the head that wears the crown.” On day one of the test, Escalante led all four of the combined Supersport/Stock 1000 Group B practice sessions, with his quickest lap of the day – a 2:14.995 – occurring during the fourth and final session of the day.

In similar fashion to Baz and Escalante, SportbikeTrackGear.com Junior Cup rider Ben Gloddy led all four sessions aboard his Landers Racing Kawasaki, with his fastest overall lap of 2:32.732 happening in the fourth session. The Twins Cup class riders also practiced on the track at the same time as the Junior Cup class, and Wrench Motorcycles’ Ethan Cook went quickest on the day aboard his Yamaha with a lap of 2:31.720.