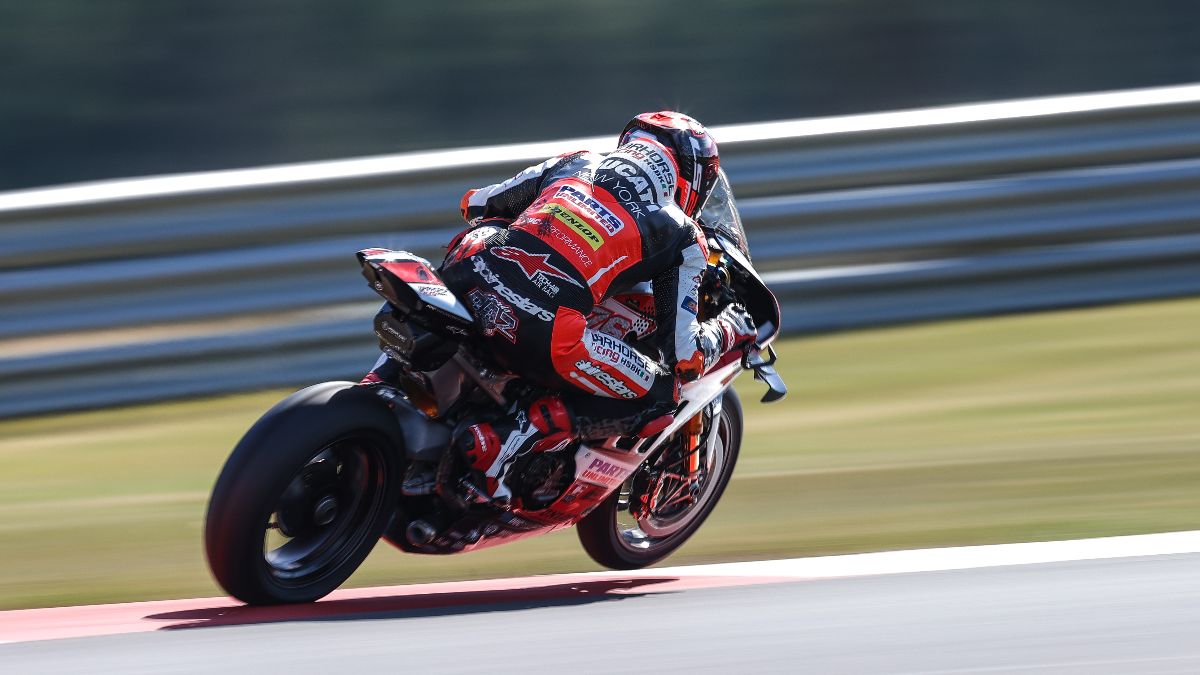 You have to walk before you can run and today Loris Baz started to jog as he earned provisional pole for the weekend’s two MotoAmerica HONOS Superbike races on a scorching-hot afternoon at Ridge Motorsports Park by out-qualifying Jake Gagne, a task that has proven to be virtually impossible thus far in 2021.

Frenchman Baz and his Warhorse HSBK Racing Ducati New York Panigale V4 R and Gagne and his Fresh N’ Lean Attack Performance Yamaha YZF-R1 both did their best laps on their seventh go-arounds of the 2.47-mile Ridge, with Baz lapping at 1:40.374 to best Gagne by just .169 of a second.

“It was a good session, like all the weekend since Thursday,” Baz said. “Doing a good job, the guys from the team are doing an amazing job to make me feel comfortable on the bike. We’ve been talking since the beginning of the season that we still don’t have the base setup we want, and I think we found the direction after qualifying at Road America and we showed in race one that we were fast. We’ve just gone in the same direction and improving, and I felt more comfortable on the bike because also we make less changes so every time I go out I know the bike better and I improve myself on the bike. It was a good session. I missed my laps with the last tire, and I think I could have done a couple of tenths more faster. I did a couple of mistakes in section two, and I think I can improve on the electronics, but I’m pretty happy. I’m happy because we worked all day yesterday and this morning with a full fuel tank race simulation and I did a lot of laps. That (Q1) was really the first session we put in low fuel for a time attack, and it worked well so I am happy. I’m improving on my weak point with the Dunlop that is the early laps. That’s where Jake (Gagne) is so strong in the beginning of the race. I’m really happy with what the team is doing because we started late but are catching up.”

Gagne’s best in Q1 was slower than in the morning FP1 session, held in much cooler temperatures, when he dipped under Cameron Beaubier’s lap record with a 1:40.110. Baz, meanwhile, lapped at 1:40.621 in the morning session.

M4 ECSTAR Suzuki’s Sean Dylan Kelly put his GSX-R600 on provisional pole for the MotoAmerica Supersport races, the Floridian .652 of a second faster than his rival Richie Escalante and the HONOS HVMC Racing Kawasaki. Kelly’s teammate Sam Lochoff ended the session in third.

Ridge Motorsports Park/DiBrino Racing’s Andy DiBrino put his local knowledge to good use by earning provisional pole in the Stock 1000.

Twins Cup had its Q1 session on a hot Friday afternoon and it was Veloce Racing’s Anthony Mazziotto leading the way over Robem Engineering’s Kaleb De Keyrel and Righteous Racing’s Jody Barry, who was returning to action following his big crash at Road America. Mazziotto was .600 of a second faster than De Keyrel.