Bastianini began his career on minibikes in Italy before his first taste of the Grand Prix paddock came in the Red Bull MotoGP Rookies Cup in 2013. Ending the year in fourth and taking two victories and a pole, it was an impressive performance from the Italian and he moved up to the Moto3™ World Championship the year after. In his rookie year he took three podiums and ended the year inside the top ten overall – as well as being named Rookie of the Year.

The next season saw Bastianini become a Grand Prix winner as he won his first race at Misano World Circuit Marco Simoncelli, and he finished the season third overall after six podiums and four poles. He was again a winner in 2016 as he took victory in Motegi, and ended the year second overall in the standings. 2017 proved a tougher season but the ‘Beast’ gained traction by the end of the year to end the season with another three podiums to his name. The following year he was back to winning ways with victory in the Catalan Grand Prix and six podiums overall, proving a perfect springboard for a move to Moto2™ for 2019.

Bastianini’s rookie season in the intermediate class began with three top tens in a row and he was into the top five by Catalunya, showing off his impressive ability to adapt once again. Brno saw him take his first podium, and he was fighting for Rookie of the Year before getting crashed out in Austria and injury seeing him sit out the following British Grand Prix. He finished the year with some more top tens, but moreover, the seeds were sown for his sophomore year in the class.

As 2020 began under the floodlights, Bastianini took a podium first time out and immediately established himself as a frontrunner. Once competition re-started in Jerez the Italian had a tougher race in the Spanish Grand Prix, but he bounced back with two wins in a row to put himself well in contention for the title. Bad luck hit again in Austria as he crashed out, with 10th place next time out at the Red Bull Ring proving a more muted return to the points in the Styrian Grand Prix. But the ‘Beast’ got back to his consistent frontrunning ways thereafter, taking a third place and a win in the two races at Misano.

A sixth in Catalunya then prefaced an 11th place in France, but Bastianini kept calm to get back on the rostrum once again at Aragon with a second and third. As key rival Sam Lowes (EG 0,0 Marc VDS) won three in a row, it was the best damage control the Italian could do and it kept him well in touch before the European GP proved a turning point.

As Lowes crashed out, Bastianini fought back from 15th on the grid to take fourth and with it the Championship lead. That gave him his first shot at the title on take two at Valencia, and with Lowes suffering the after-effects of an FP3 crash the momentum was suddenly all with the Italian. After another tougher qualifying down in 12th, Bastianini produced yet another great comeback to finish P6. Not enough for the title in Valencia though.

This left the ‘Beast’ with a 14-point advantage over Lowes – who finished P14 in Valencia – heading to the final race of the season. Marini and Marco Bezzecchi (Sky Racing Team VR46) were also in the hunt, 18 and 23 points adrift, so the pressure was on. However, Bastianini dealt with it incredibly well. A last dash P4 in qualifying and an equally great P5 in a fantastic and tense race was enough to see the number 33 claim his first World Championship crown.

An outstanding season ends with Bastianini finishing on 205 points, helped by three wins and seven podiums in 15 races. Congratulations to Enea Bastianini and the Italtrans Racing Team on an awesome 2020 campaign, a wonderful sign off as The Beast looks forward to his MotoGP™ debut in 2021! 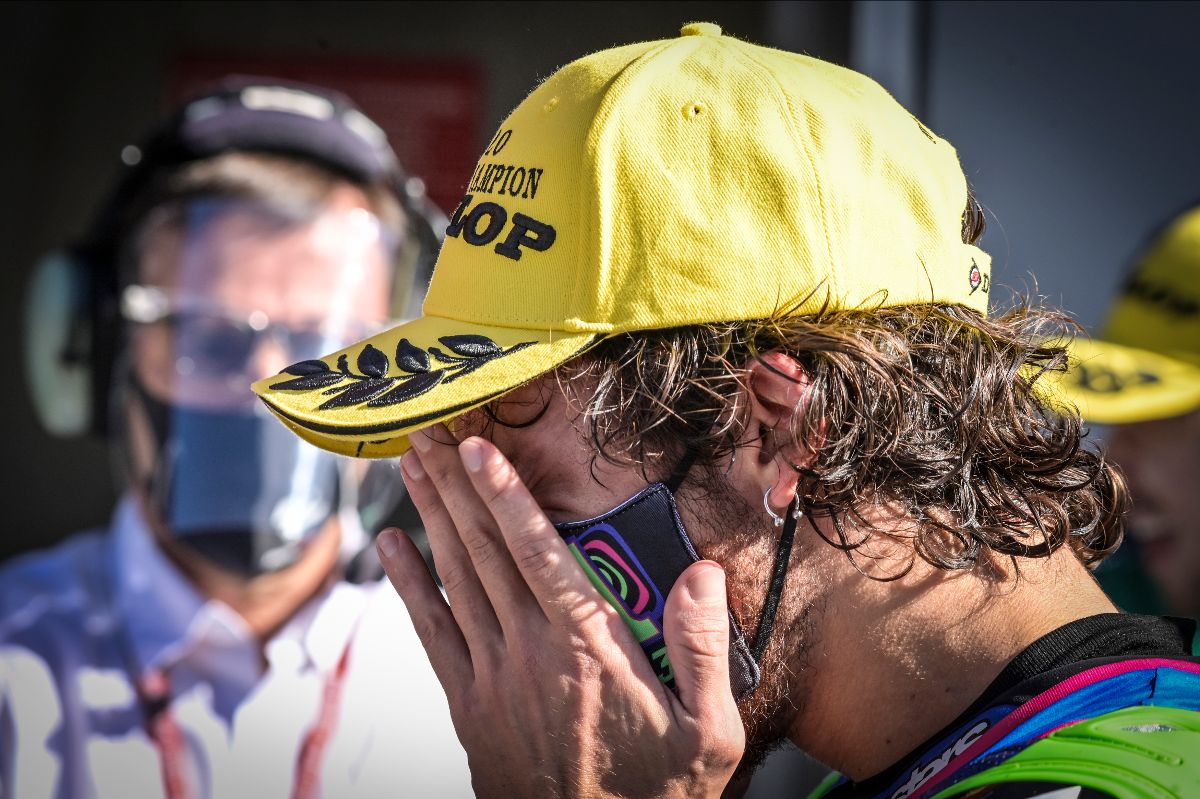 Enea Bastianini: “Incredible feeling. Today is the best day of my life I think. The race was really hard, the pace was really fast and in the middle of the race I thought, ‘ok, I have to push more’ because I was in sixth and Sam was at the front. I risked a bit more. And finally when I saw on the last lap, 2020 World Champion… it’s a dream come true for me. And I dedicate this World Championship to the guys, my trainer, my family, to all the team and to all the paddock because it’s been a very difficult season with Covid. It’s fantastic to be able to race this year. It was a dramatic situation.

“The strategy was to be fast the first two or three laps and get to the front, but when Luca and Sam overtook me I thought, ‘ok, now I need to stay behind’. When I was in sixth I thought to push more, because if Sam won I had to be fourth. but then I saw Sam in third and I knew fifth was good for me. It wasn’t necessary to overtake Marco. It’s incredible this season, for me.

“It’s important to be consistent, this Championship was short – good for me because I took three victories and seven podiums, one zero in Austria, and this was the key to the Championship. Luca and Sam were really fast. Now there’s another dream, MotoGP™, and I know it ill be hard to be fast, lots of electronics and I have to adapt my style for this. I think I have time to improve and we’ll see what we can do next year!”