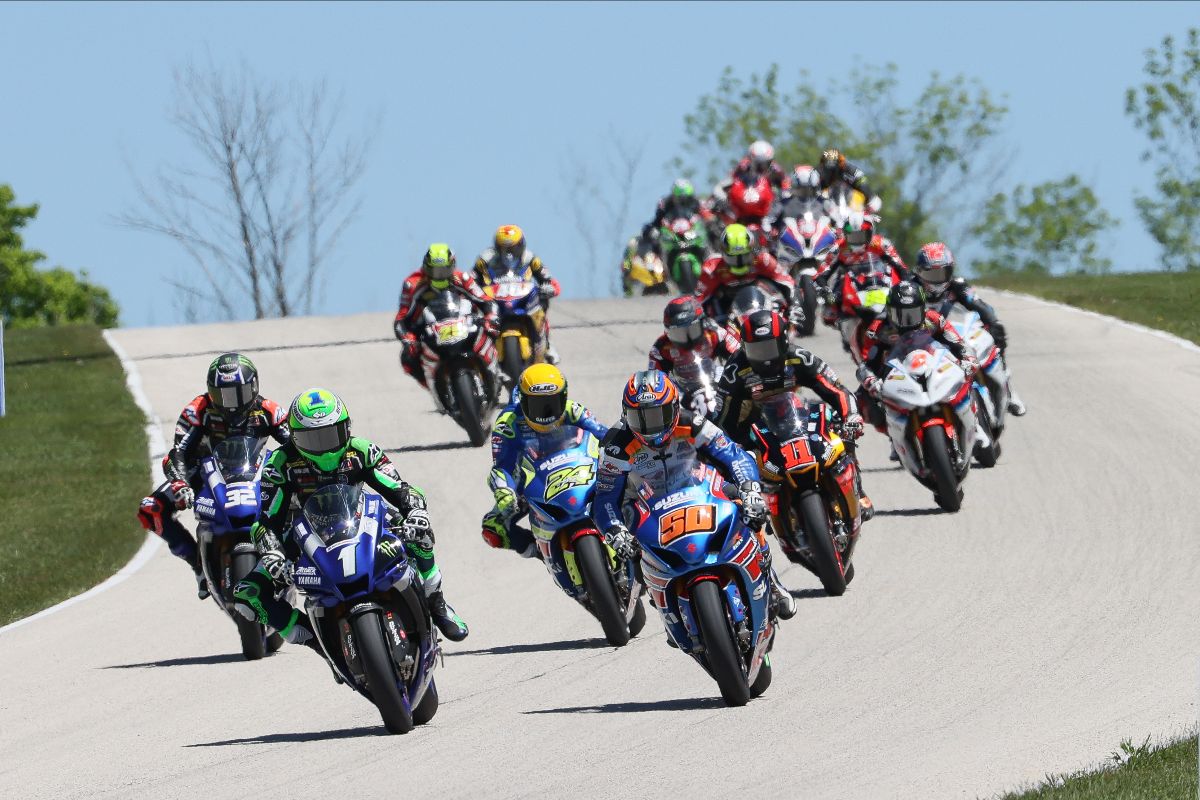 Apparently, Cameron Beaubier is taking this social distancing thing to the utmost degree, the Monster Energy Attack Performance Yamaha rider making sure his competition never got close as he completed the double win at Road America today.

Beaubier followed up yesterday’s 7.8-second win with an even more impressive outing, the four-time defending MotoAmerica Superbike Champion winning again on Sunday – this time by 13.4 seconds – to leave round one of the HONAS Superbike Series with a perfect-points haul of 50.

“I can’t ask for a better start to the year,” Beaubier. “Being able to get pole and both race wins. If you look at my track record, that’s not really how my seasons start. I’m normally trying to crawl back points throughout the year. Plain and simple, I just got to give it up to Richard (Stanboli) and Keith (McCarty) for putting this amazing program together – Monster Attack Yamaha. My bike, I honestly don’t think I’ve ever been this comfortable on a motorcycle. Just the track back home at Buttonwillow, just my feeling with the bike, with the 2020 R1. I’m able to get under the bubble a little bit better, pick up some mile an hour on the straightaway and with the electronics that they’ve been working on, I’ve been able to get off the corner. The bike’s just easier to ride. I’m just having pure fun on the thing. It’s really nice to have one and two up (Yamahas) here. I just want to not get too excited yet. Just keep the ball rolling and keep going. Obviously, some of our competitors went down today, and it’s going to be a long season. I’m just so happy we’re back racing and want some more.

Second place today went to Beaubier’s teammate Jake Gagne, the laid-back Californian bettering his third place from Saturday by a spot. Gagne was in a battle for the spot early on with Saturday’s runner-up Mathew Scholtz and Bobby Fong when the two came together in turn five and crashed. That left Gagne free and clear to ride to a lonely second, 13.4 seconds behind Beaubier and some six seconds clear of an intense battle for the final podium spot.

“We’re leaving our first round with this Yamaha Attack team with a couple podiums, so I’m happy,” Gagne said. “We made some changes overnight. This morning in warmup, I was actually feeling pretty good about the bike. A couple things changed in the race. We had a little more heat on the track. I felt like we had a good bike for a couple laps, but I really, really was struggling there after a couple more laps once I got a little tire wear going. Cam was on rails today. He was flying. It just shows these Yamahas really are running good. Obviously, Mat (Scholtz) was right up in there. Right when Bobby (Fong) got by me, and then I was going into three behind Mat, and then down the straightaway to five. Bobby drafted me, he drafted Mat, so he got a big, old double draft from us and got in there hot. Mat’s getting in there deep. Bobby’s in there deep. I saw it from a while back. I let up and I saw Bobby getting sucked in. I think he just fixated and just rammed right into the back of him (Scholtz). I feel for Mat because those Westby guys work really hard and it would be nice to get another Yamaha up here, but that’s racing. You got to look ahead.”

“We definitely had a little luck fall in our hands but being on the podium is being on the podium,” Herrin said. “So there was some very hard fighting with Kyle. Me and him haven’t really got along super well in the past, so it was almost like a Danny Eslick feeling for me. I just saw red. I was so mad. I just wanted to get behind him so bad. I had arm pump for the first time in a long time this weekend, so I just wanted to get in front of him and if I had to slow up the pace I could. That way it could help my arm out a little bit. That actually ended up working out. But seeing those guys fall, seeing Toni (Elias) fall was a bummer. I was like, ‘okay. I at least got a sixth again.’ I saw Scholtz and Bobby fall and I was like, ‘oh, s^%$. This is a podium spot right here.’ Then immediately I starting thinking, ‘man, if Scheibe got a podium…’ And that made me want to push that little bit extra. I’m just happy we could be up here and get some of that BMW contingency, which I really need this year. It’s nice. I don’t know if this is BMW’s first Superbike podium in the States or not, but it just feels good to get it up there. I can definitely say, no disrespect to the team, that I don’t think that bike has the potential right now to be getting on the podium without everybody made mistakes like they did today. Like I said earlier, we got lucky, but we’ve also been doing our work this weekend. I did four practice starts on my bike this morning just to try and get a little bit better launch off the line today. Just stoked to be up here. Congrats to these guys. Definitely didn’t expect this today, so thank you to the Scheibe Racing BMW team and all my sponsors.”

For the second day in a row, M4 ECSTAR Suzuki’s Toni Elias failed to finish. This time it was a crash on the third lap that knocked the Spaniard out of the race and he leaves round one with zero points after his mechanical non-finish in race one.

Beaubier is free and clear at the top of the championship standings with 50 points, 14 points clear of Gagne with Herrin 24 points behind Gagne in third. Wyman is fourth in the title chase with 24 points, four points clear of Scholtz.

MotoAmerica will return to Road America for its second round, June 26-28, and it will do so with fans in attendance after this successful weekend of racing without fans due to the COVID-19 pandemic.