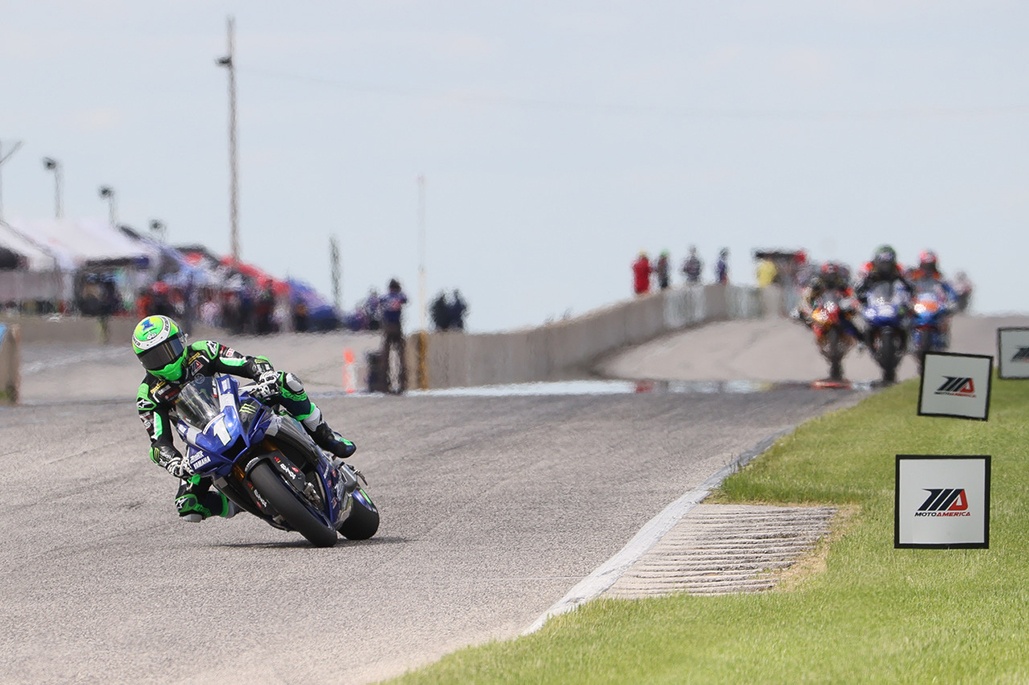 Cameron Beaubier won three races in a row before crashing out of the lead in race two at Road America 2, proving that no one is perfect. But he looked pretty damn close to that on a scorching hot Saturday at Michelin Raceway Road Atlanta, the four-time MotoAmerica Superbike Champion riding to his fourth victory of the season in dominating fashion.

Beaubier led off the start, but it was Jake Gagne leading the way through the esses on the opening lap. Although his lead was short lived, it still marked the first time the Monster Energy Attack Performance rider had led a Superbike race. Once his teammate Beaubier sped past, the two teammates circulated together for a few laps before Beaubier pulled away. The points leader slowing in the closing stages of the race to beat Gagne by 4.786 seconds, but said his race was by no means mistake-free.

“I had a couple mistakes in there that I was able to salvage pretty good,” Beaubier said. “They were just scary more than anything. Like Jake (Gagne) said, it was hot and greasy out there. I had a couple pretty good front-end pushes. One down into three where I had that little mistake this morning in Superpole. It was just hot and greasy. Jake got an incredible start from the second row. I knew he was going to be fast. I tried to get by him as quick as I could and just put my head down. But our gap was kind of yo-yo-ing a little bit. To be honest, going into the race I didn’t expect that. So, hats off to him. He’s riding awesome. Hats off to Matty (Scholtz). Three Yamahas up here on the box. It feels really good. It’s going to be another tough one tomorrow. I’m ready for it.”

The win was the 42nd AMA Superbike victory of Beaubier’s career and his sixth at Michelin Raceway Road Atlanta. He now leads the championship by 14 points over Gagne, 100-86.

Gagne, meanwhile, was well clear of Westby Racing’s Mathew Scholtz, the South African trailing the Californian by 16.3 seconds at the end of the 19-lap race.

“That was I think one of my best starts all year, for sure,” Gagne said. “I knew I was on the second row after the Superpole, so I wanted to make sure I got off well. I knew once Cam (Beaubier) got to the top of that hill in the lead, he was going to go right from the get-go. I was behind Cam into turn one. He ran a little bit wide out there and I just got a good drive up the hill and managed to lead going down into the chicane up there. I just put my head down. I knew Cam was right on my butt. I thought Mat (Scholtz) would kind of be right there for sure. I know these Yamahas were running good. Then we put our head down. We did some 24s (1:24 lap times) out there. Cam kind of came by me down the straight into turn 10 down there. It was everything I had to try to stick with him and do a couple more 24s. I was happy. I was happy after the day we’ve had. We didn’t get a whole lot of laps today. We missed a lot of that first practice and missed a lot of that Superpole stuff. So, I’m really happy on the progress we made and how hard those guys are working. The Monster Energy Attack Yamaha is really rolling good. We’re starting to learn a lot more. It was good to get up there and race with Cam a little bit and see him for a little while there because he’s been going pretty much all year and out of sight. We learned a lot today. I’m happy. It was a little lonely out there once Cam pulled a couple seconds there, and then it was kind of just rolling around in the heat. It got tough out there. Those tires were really getting worked in that heat. Keeping the front end underneath us and the rear end underneath us, was tough out there. I’m glad we brought it home in second. Again, hats off to the guys because they’re really working hard. We had a lot of weird stuff going down this weekend, so it’s good to bring it in and pull a little bit of a holeshot and lead a little bit and run around there with Cam. Hats off to Cam and Mat. Got a couple Yamahas up there, so it’s good.”

The third-place finish was Scholtz’ second podium of the year and came at a track that he calls one of his favorites.

“After the first lap I settled into fourth behind Toni (Elias) and I could just see immediately Jake and Cam were pulling a massive gap, even after maybe five or six corners. Toni’s bike is quick, and he brakes late so I couldn’t really pass him. I was planning on something into corner 10 but coming onto the back of the straight (Kyle) Wyman passed us. Then his bike was leaking a ton of oil or something. It was spraying all over the front of the bike and my visor. So, I was just trying to miss his line where he was going. That really slowed me down. Then I maybe got about a second off of Toni and Kyle Wyman, and then I think Kyle’s bike stopped in corner 10. Then I just slowly caught up to Toni and passed him. Then I think he was there for a couple of laps after that, but once I began dipping to the mid to upper 25s, I think he was dropping off. So, I just kind of rode my own race from there. It was a little bit boring towards the end. I could see Jake was really far up front. Couldn’t see Cameron, so I was in no-man’s land. So, I was just feeling lost. Hoping in the next race we can pick up the pace and hold onto Jake and Cam.”

Elias rode his M4 ECSTAR Suzuki to fourth, well clear of his teammate Bobby Fong who had crashed in the morning session at speed and injured his right hand. Fong, in turn, had a big lead over FLY Racing ADR Motorsports’ David Anthony, the Australian also having a lonely ride to sixth.

Two of the top riders in the series, One Cure/KWR Ducati’s Kyle Wyman and Scheibe Racing BMW’s Josh Herrin, both suffered mechanical problems that knocked them out of the race.

We start from zero: MotoE riders reset and reload for Round 2