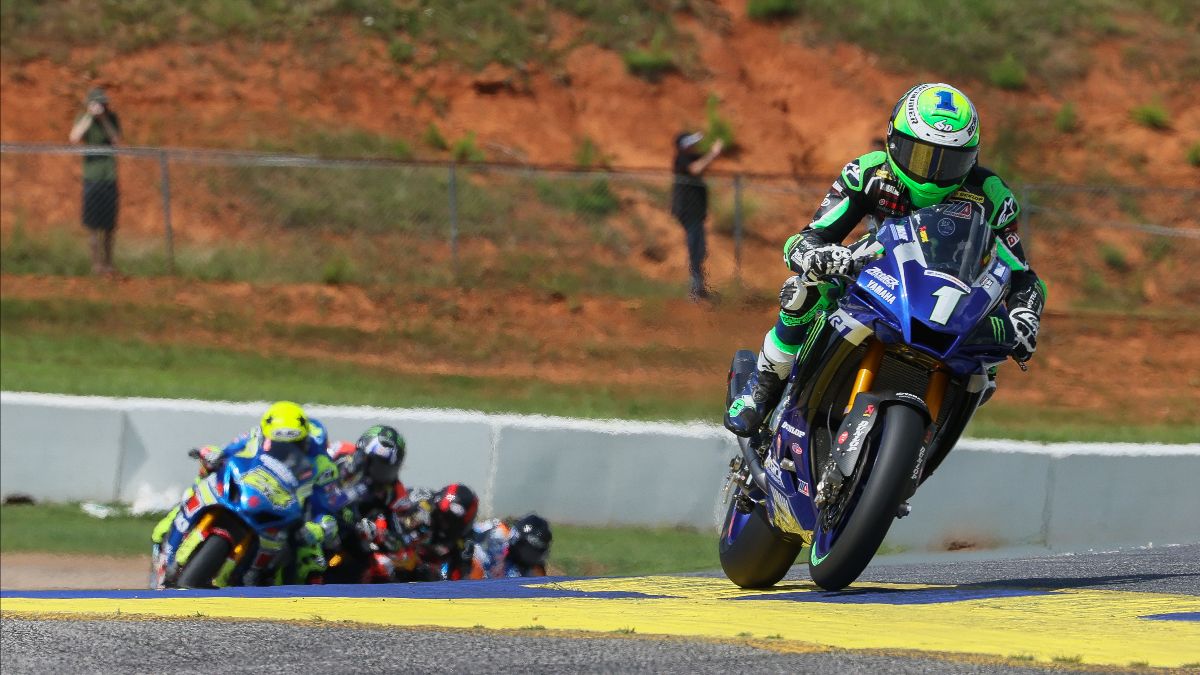 Cameron Beaubier completed a perfect weekend for him and his Monster Energy Attack Performance Yamaha team at Michelin Raceway Road Atlanta, the four-time defending MotoAmerica Superbike Champion riding to his second victory in two days on another scorching hot day in Northern Georgia.

On Sunday, the HONOS Superbike podium was an exact replica of Saturday’s with Beaubier’s teammate Jake Gagne finishing second and Westby Racing’s Mathew Scholtz third again. It was also the second straight podium sweep for the Yamaha YZF-R1.

For Beaubier it was his fifth win in six races and his seventh career AMA Superbike win at Michelin Raceway Road Atlanta. Additionally, the win was Beaubier’s 43rd career victory in the premier class.

For those who have watched Beaubier since he first started riding a Superbike, it’s obvious that this is as comfortable as he’s ever looked on a motorcycle. And it’s a point he agrees with.

“I definitely feel really good on this thing,” Beaubier said. “It’s confidence-inspiring the way Richard (Stanboli) has the electronics set up and just the way the bike works with me. I’m just really enjoying riding right now. I’m just having fun. I saw Toni (Elias)… he got the holeshot. For a second I thought it was Jake (Gagne). I was like, ‘oh, man. I’ve got to try to get in front of him as quick as I can.’ But it ended up being Toni. I just pinned it up into the second corner and made sure I was leading into the chicane. I knew how fast Jake went this morning. He’s progressed throughout the whole weekend and he’s gotten faster and faster. I knew I just had to put my head down. I know Toni’s pretty hard to pass. I knew he was in second and I just gave everything I had for the first half of the race and then put it in management mode. It was really good. We didn’t change too much on the bike this weekend, but a couple of the small changes just made it more comfortable to ride. As a rider, I’m sure these guys all say the same thing. This track is pretty physical. You could be a foot off going into the chicane or coming down hard on the brakes into the last section and screw up the next three corners. I think that’s just a testament to how comfortable Richard has us on these things. Like Jake said, it’s just good to have three Yamahas up on the podium each day. Looking forward to going to the next one.”

The race was red-flagged early when Danilo Lewis crashed in turn seven. It was restarted shortly thereafter and with similar results. Although he didn’t get the holeshot, Beaubier was at the head of the field when they hit the esses for the first time and he instantly gapped the field with Gagne getting baulked slightly by M4 ECSTAR Suzuki’s Toni Elias. Soon Gagne was past the Spaniard after passing him around the outside, but he didn’t have the pace of his teammate. Ditto for Scholtz, who also made his way around Elias before trying unsuccessfully to catch Gagne. Both riders, however, ended up closer to the race winner at the conclusion of the race, though Beaubier obviously slowed his pace toward the end.

Gagne cautioned that although he was closer to Beaubier at the finish today, there were reasons why.

“It was a little bit of a shortened race,” Gagne said. “Cam (Beaubier) got off to that lead early. He definitely kind of settled into a nice, comfortable pace. I knew he wasn’t going to be making any mistakes up there. He’s been riding really, really good. I knew Mat (Scholtz) was going to be faster today than he was yesterday. We could see that, like he said, in warmup. He had some more pace, so I knew he was going to be there. I think we all know, at a track like this the start was everything, if we could get up to that top chicane. I was bummed with that restart because me and Cam were running one and two before that restart. At least I could see Cam. He was right there in front of me. Kind of got off to a better jump. Then after that restart I knew we had to get another start. My starts have been good this weekend. One of my best-ever starts. We figured a couple things out. Cam led into the chicane with Toni (Elias) in-between us, so I was like, ‘I know Cam’s just going to take off. He’s going to set sail.’ Luckily, I got by Toni down into turn six on that first lap, but even by then Cam was already setting sail. When I went by Toni around that outside, I was pushing that front all the way in there. I thought he was going to come back underneath me in seven, but luckily I held it. The beginning of the first couple laps were tough after that restart. We kind of didn’t have the brand-new tire bite like we had originally. I was kind of making a couple mistakes. I saw on my pit board, I think it was Mat probably closing the gap a little bit. Like he said, we were going a little bit back and forth, back and forth. Then I kind of tried to smooth myself out and put my points together a little bit towards the end. Hats off to Cam. Hats off to the Yamaha Monster Energy Attack. It’s good to get a Yamaha sweep on the Superbike podium this weekend. And hats off to Mat. He didn’t let it come easy to me. I saw that pit board the whole time and I knew he was right there. Luckily, we got a couple days and we’ll be in Pittsburgh.”

At the finish, Beaubier was 2.5 seconds ahead of Gagne and 6.1 seconds clear of Scholtz, who was pleased with the progress he made from Saturday’s race.

“I got a decent jump off of the line from the second row,” Scholtz said. “Jake (Gagne) passed me early on and I started panicking slightly because I knew they would catch Toni (Elias) fairly quickly. So, I got past Toni around corner seven. Then I think a couple laps after that myself and Jake were going backwards and forwards maybe down to about one to two seconds. Then I think Jake upped his pace and I had nothing for him there. I was kind of sliding around lots. Yesterday I finished third and I wasn’t happy because we were so far back. Today I finished third but I’m actually really happy. We kind of closed the gap up to the two of these guys. Both of them are riding really well. Hopefully at Pittsburgh we can just carry on working hard and just carry on closing the gap to them.”

Fourth place went to M4 ECSTAR Suzuki’s Bobby Fong, the winner of race two at Road America 2 hounding Scholtz for most of the race. He ended up less than a second behind the South African at the finish and 2.4 seconds ahead of his teammate Elias.

OneCure/KWR Ducati’s Kyle Wyman finished sixth, the Ducati Panigale V4 R rider making up for yesterday’s disappointing non-finish after a mechanical issue took him out of the race early. Wyman battled early with Scheibe Racing BMW’s Josh Herrin before pulling away to a comfortable margin of some six seconds.

After three rounds and six races, Beaubier leads Gagne by 19 points, 125-106. Scholtz moves past Fong and into third with 76 points – three more than Fong.

MotoAmerica Headed Back To Road America With Fans In Attendance