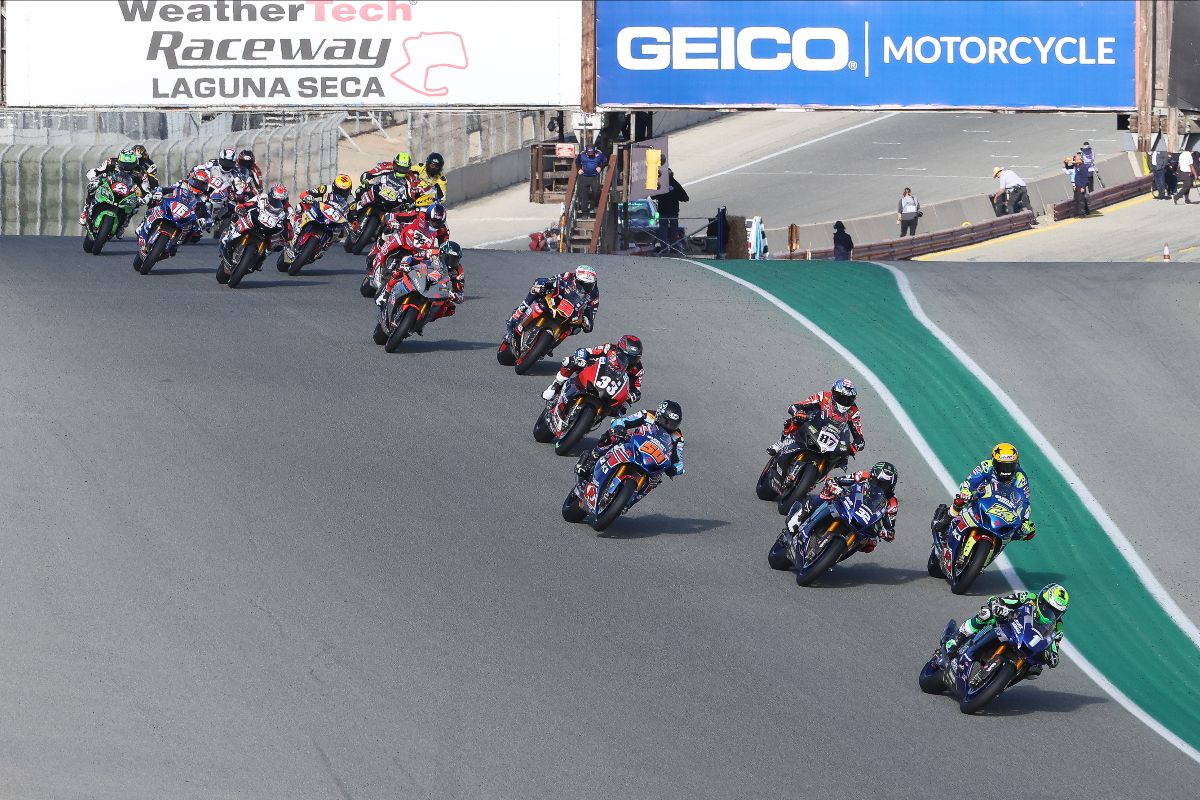 Cameron Beaubier ended his MotoAmerica career in the best possible fashion on Sunday at WeatherTech Raceway Laguna Seca, the five-time MotoAmerica Superbike Champion adding two wins today to his one win from yesterday to bring his season total to 16 victories. Now the 27-year-old can focus his efforts on the next phase of his career – the Moto2 World Championship.

Beaubier’s two victories today in the MotoAmerica GEICO Motorcycle Superbike Speedfest at Monterey were dominating. He won the first of the two in iffy conditions by 10.47 seconds and the second by 4.76 seconds. The two wins on Sunday were his 15th and 16th of the year and the 16th tied him with former teammate Josh Hayes for the most wins in a single season in AMA Superbike history.

“It’s been a whirlwind of a weekend emotionally and just everything,” Beaubier said on Sunday after his final MotoAmerica race on the Monster Energy Attack Performance Yamaha. “It felt good just to get everything out of the way Friday and get the contract signed and have the press conference in here and let everyone know I’m moving on, just let Yamaha know how thankful I am. Truthfully, it’s bittersweet, like I’ve been saying all weekend. I’m leaving some great people behind here in MotoAmerica. I’m definitely going to look back and cherish these moments, all the good moments we’ve had in the past. I was sitting on the grid today and I was getting a little emotional. I was like, ‘What are you doing? You’ve got to go race. Come on. Pull yourself together.’ I just went out and abused my R1 for a little bit and that made me feel a little better. Came back in and the emotions started coming back, your throat starts getting heavy or whatever.

“Just this last year has been one of the most fun years of my life at home and at the track with all the guys, just having a good time. When you’re getting good results and you’re not crashing too much, the team is happy and that means the rider is happy. It’s been so fun with them. I’ve said it multiple times, but Yamaha truly is a family to me, and same with all you guys at MotoAmerica. I’m going to miss you guys so much. Everyone goes home and does their thing at home, but we’ll still keep in contact and all that stuff. Then we get to go racing all weekend. It’s sad that’s coming to an end, but it’s not the last time I’ll show my face at the track at MotoAmerica. I’m glad to cap it off with three wins this weekend. I just had pure fun riding my bike this weekend. I just was able to ride free; ride loose and really, really enjoyed this weekend on my bike after having a rough weekend at Indy. It put everything back into perspective for us. I’m not sure if it’s Toni’s (Elias) last race but hats off to Toni for an amazing career. We’ve had our battles on the track and we were at each other’s throat a couple times, but I respect you a lot as a racer and a person. You’re amazing, man. Amazing career. I’m grateful for you coming over here and kicking our butts and putting us in our place. He gave us something to chase. Just really looking forward to getting going next year and hope to make you guys proud.”

M4 ECSTAR Suzuki’s Toni Elias also had an emotional weekend at WeatherTech Raceway Laguna Seca, the Spaniard telling Suzuki that he wouldn’t be returning to their team in 2021 and that he was looking for a brand change to recharge his career. He then went out and finished on the podium in all three races – finishing third in race two on Sunday and second in race three behind his long-time rival, Beaubier.

“Yes, very good weekend,” Elias said. “I really needed this. It’s been a difficult year for many reasons, not only racing, also personal side. Very nice to end this chapter. I had fun. Of course, it’s not a win, but tastes like a win coming from where we came from. Today, I think this bike is the best bike I ever ride here at Laguna, because my lap times were better than other years, just Cameron (Beaubier) another step he did. It’s incredible. Difficult to be at his level. It’s been amazing. But super happy because I had so much fun. I start to do what I wanted, not lose the initial part of the race, and then passed one rider, then another rider, in my style, in braking areas. I was riding so good, just in case this was the last one. I’m very happy. I feel I’m still very strong and I just need something else. I need fresh air. I need new motivation. I need something to work on, to develop things. We’ll see. As I said before, I let the universe, the destiny (decide). So, I hope come back with something good. But thanks to my team for all the season. Thanks to Suzuki for all these years, and to MotoAmerica to have me, to take me like home like another American. I think I’m half American now. Thanks to Suzuki and you guys I have a family here now, so I’m not going to go away. I’ll stay here forever.

“The last part I want to, like he said to me, hats off to this guy (Beaubier). I have to say, I battled with many strong riders in World Championship, specialist in 125, specialist in 250, specialist in Moto2, MotoGP, Superbikes. Valentino (Rossi), I think was one of the toughest guys I ever battled but he (Beaubier) is not less than him. I think he (Beaubier) has that level, has level enough to do it. Now is the opportunity. I believe in him and I believe in his opportunity. This way will bring him to MotoGP because he’s good enough. Here you have a friend. We had big battles. We had so much fun. It’s been really cool. Sometimes we play back to each other, we play our cards, but this is racing. And after that we appreciate each other. If you need me, just have the phone and do it. Good luck, man. Thanks to my family. They’ve always been behind me, supporting me. The biggest supporter I have is Kristie (his wife). It’s been a big change in my life discovering new things in life. It’s amazing. I will try to continue some more years and having fun. My next goal would be one day I put Toni (his son) on the podium on the top of the box next time. That would be really good. Is my next goal, so I hope to make it happen.”

The same three men stood on the podium in all three races – Beaubier, Elias and Warhorse HSBK Racing Ducati New York’s Lorenzo Zanetti. Zanetti ended up second in race two behind Beaubier and third in race three behind Beaubier and Elias. It was the Italian’s fourth, fifth and sixth podiums in his eight starts in the MotoAmerica Series.

“Thanks everybody from MotoAmerica,” Zanetti said. “I appreciate all your hospitality during these months. I had fun here. A good place to enjoy. The feeling is quite good. When I come here, I didn’t know what I can do. I believe in myself but not many believe in me. So, I know my level, but when you arrive in a new championship, you don’t know the real potential. Everybody knows the career of Toni (Elias), and everybody knows the championship of Cameron (Beaubier). So, I know the level is high. So, when I arrive in Indy and I see that I have the potential to fight with him (Beaubier), I’m happy. Just try to focus and every race work with the team, work together to make the best result. So happy to take six podiums. That’s amazing. Now I just want to be back home with my kids, my family. I enjoy a lot this moment.”

In the final race of the season, Fong was fourth ahead of Gagne with Canepa sixth for the second time on the day. Wyman was seventh again, ahead of Petersen, Gilbert and Ride HVMC Racing’s Corey Alexander.

Beaubier ended the season with a massive 135-point lead over Gagne, 437-301. Fong was third, 48 points behind Gagne and 31 ahead of Elias, who topped the injured Mathew Scholtz with his strong effort in the series finale by just a single point.