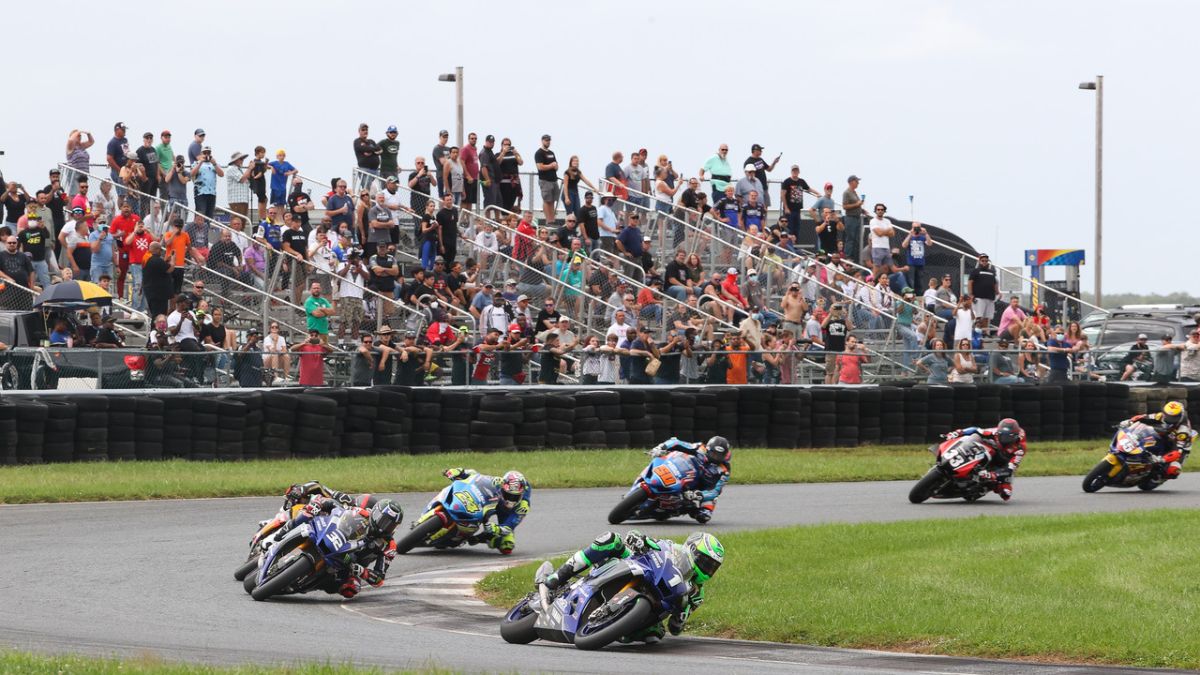 Monster Energy Attack Performance Yamaha’s Cameron Beaubier leaves New Jersey Motorsports Park and heads to Barber Motorsports Park this week with a massive 84-point lead in the 2020 MotoAmerica Superbike Championship after, ahem, what was another walk-in-the-park victory for the four-time series champion.

While it’s too early to hand him the number-one plate with three rounds and eight races remaining the series, it’s about time to fire up the engraver.

Sunday’s win at NJMP came in a shortened race after a red flag was thrown on the second lap when Bradley Ward crashed his FLY Racing ADR Motorsports Kawasaki, putting debris on the racetrack. As he did on the first start, Beaubier grabbed the holeshot and never looked back, opening up a lead and maintaining it to the finish. At the completion of the 14 laps, Beaubier was 2.884 seconds ahead of his pursuers.

“Truthfully, I thought I was going to have a little advantage on these guys going into the second part of that race after the red flag because I was on that harder option tire,” Beaubier said. “I knew the softer tire heat cycles, and the grip definitely drops a little bit. I was riding as hard as I could from them. I was barely, barely inching away and sometimes I really wasn’t. I’m super happy that we had a good weekend here in New Jersey. It was an incredible weekend. We had perfect weather both days. It was great to ride in front of all these fans. We just need to keep going. We can’t get comfortable because both these guys keep making steps. We need to keep searching too. I’m just having so much fun riding right now and everything’s going good. I’m looking forward to getting on my bike at Barber. We had a good test there at the beginning of the season. Should be good.”

Two of those pursuing Beaubier raced to the bitter end with his teammate Jake Gagne drafting past Westby Racing’s Mathew Scholtz at the finish line by .014 of a second with the two fighting it out for the duration. In addition to the battle on track, that pairing is also fighting it out for second in the title chase. Gagne now leads Scholtz by just six points.

“Yeah, it’s a great way to finish it, obviously,” Gagne said of his weekend that featured two crashes. “It’s probably been one of the toughest weekends in a long time. Usually one crash in a weekend is enough, and that’s more than we need. But two days in a row and crashing out the first lap of the race yesterday is just always a bummer. But I learned from it. It was a good race. We were all a little bummed to see that red flag there in that first start. I think we all wanted to go – except maybe Cam, I think we all wanted to go the full distance there. But I got off to a good start. Ran around the first kind of half of the 14-lap race. I knew Mat (Scholtz) was right on me. I knew it was Mat. Then Mat came by me on the front straightaway and passed me into one. I got an opportunity to kind of check some stuff out. Like he said, there were some sections I had him a little bit, some sections he was faster than me. So, we were kind of teeter-tottering. Going into the last lap, I wanted to try to get him into one. I felt pretty good in one. I know he was really strong in there, but I figured if I maybe could get inside of him, but he closed the door. Didn’t let that happen. For me, I knew it was going to be really tough to try to make a pass anywhere. I knew Mat knows this track and it’s tough on Superbikes. You really got to push it in there. Once I didn’t make that pass in one, I was thinking about that last turn. I knew if I stayed on him, I felt like the last turn was one of my strong sections. I could kind of just get in his draft if I timed it perfectly. Luckily that’s what I did. I just timed that thing perfectly by a hair there. Hats off to Mat. It was fun battling. It was fun to bring a race down to the last lap. It feels like it’s kind of been a little while since that happened. Hats off to Cam. Hats off to Yamaha. It’s good to have a couple Yamahas back up here. We’ll be back at Barber in a couple days. Looking forward to it.”

Soon after Scholtz took over second in the final laps, both he and Gagne were baulked by lapped traffic but Scholtz may have gotten the worst of it which allowed Gagne to claw his way back for his last-lap attack.

“There were certain sections of the track that I was struggling with and where Jake (Gagne) was faster,” Scholtz said. “On the final lap I kind of got stuck behind Sam (Verderico). Jake definitely beat me. Hats off to him. But in the back of my mind I always kind of have that, if I didn’t catch Sam at that point. But it is what it is. I’m just very thankful to be up here on the podium after crashing in morning warmup. Well done to Cam (Beaubier). He’s absolutely flying. I’m kind of happy that we weren’t so far back behind Cam. Just really looking forward to Barber next week. It’s definitely the strongest track for me. I know Cam and Jake both go well there too, so let’s do some more battles.”

Bobby Fong was next, the M4 ECSTAR Suzuki rider finishing some four seconds ahead of his teammate Toni Elias, the Spaniard failing to match the pace that earned him his first podium of the season on Sunday.

KATO Fastening/StoneCastle/KWR Ducati’s Kyle Wyman was sixth after finishing fourth on Saturday, the New Yorker getting the better of Altus Motorsports’ Cameron Petersen on Sunday. FLY Racing’s David Anthony rode his Suzuki GSX-R1000 to ninth with Travis Wyman Racing’s Travis Wyman rounding out the top 10 on his BMW.