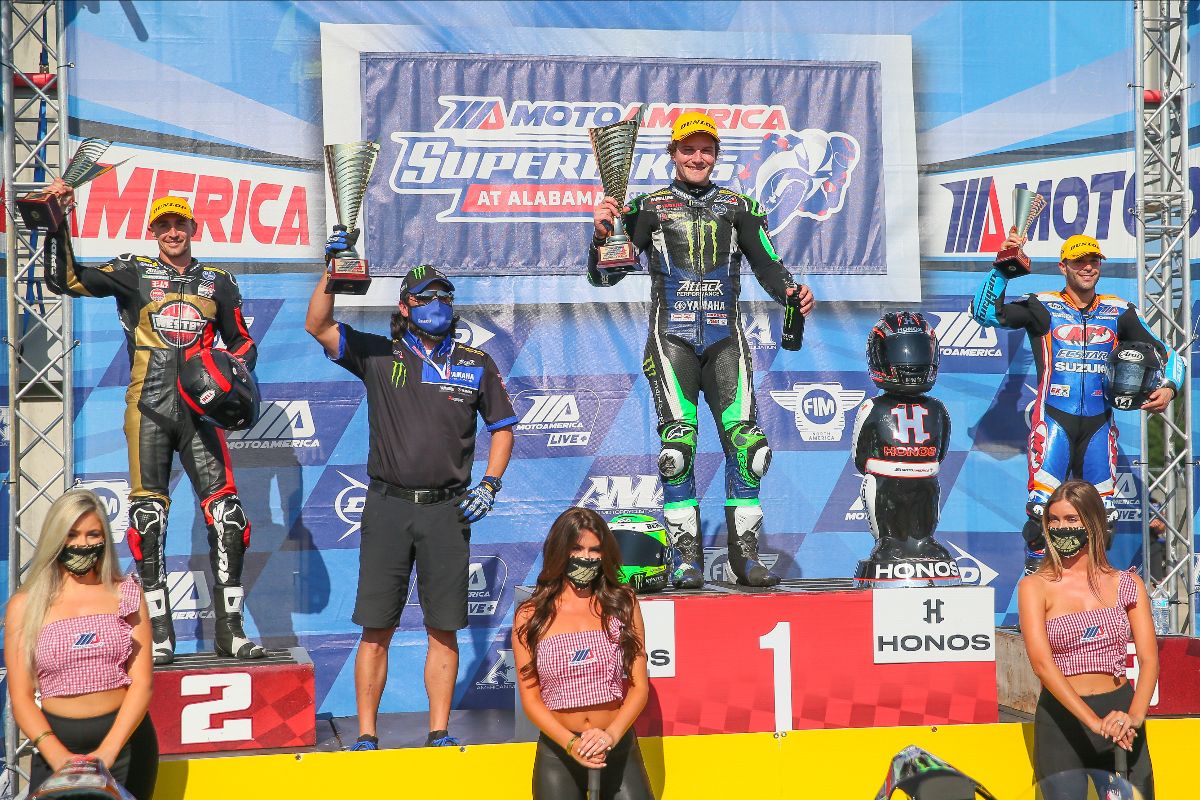 Between races Cameron Beaubier has to keep pinching himself to see if all of this is real. That’s what happens when you win 13 races, have six more left in the season and you know that, barring an issue, you will probably end the year with 19 wins.

Such is life for the four-time MotoAmerica Superbike Champion in 2020.

Monster Energy Attack Performance Yamaha’s Beaubier won his 13th race of the year on Sunday at Barber Motorsports Park, a day after winning his 12th of the season and the 50th of his stellar AMA Superbike career. Today’s was similar to the other 12 wins with Beaubier jumping out front off the line, storming away at an unmatchable pace, and then maintaining that lead to the finish. At the line he was 5.125 seconds clear of second-placed Mathew Scholtz.

“Obviously, my game right now is just to try to get out front early and try to take advantage of the good rubber and try to manage my gap if I have one,” Beaubier said. “There towards midway I had a pretty good, I don’t know if they showed it or not, but I had a pretty good (front end) tuck. I almost crashed out of Charlotte’s Webb. The wind was kind of gusting. Some laps you’d go in there and you’d have a pretty big push, other laps you’d brake early. The wind was pretty tricky for me. I don’t know about these guys, but I was definitely getting blown around out there more than I was yesterday. After that happened, I just tried to kind of settle down. My gap started going down and Matty (Scholtz) started catching me a little bit. I just kept trucking along and brought it home. It’s been amazing. It’s just crazy. It’s crazy the year I’ve been having and just how fun and how hard the team is working. It’s so good to come in at the end of the session and you debrief with your guys and you take it seriously and all that, but then when they’re loading up the truck and leaving everyone’s just joking around. As a rider it’s so good to see those guys having a good time and enjoying their job like I am. It’s been an incredible year so far.”

Westby Racing’s Scholtz earned his 10th podium of the season and moved to just one point behind Beaubier’s teammate Jake Gagne in the battle for second in the HONOS Superbike title chase. Gagne was in the battle early but ran into clutch trouble that slowed him to an eventual fifth-place finish.

“It was pretty good,” Scholtz said of his race. “I don’t really know what happened with the start. I got shuffled back to fourth or fifth place and I had to make a sketchy move to get up to second. I knew that Cam (Beaubier) had a really good pace. Jake (Gagne) passed me and with his warm-up time I knew he would be quick too. So, I didn’t really try to fight him too much. I was hoping I would go with him and try to maybe get up to Cam. But then I saw something happen to Jake’s bike, which was unfortunate. Then I kind of put in a few decent laps. I saw that the gap back to third was actually getting bigger so I kind of started chilling out. Then I noticed that Bobby (Fong) was sort of catching me at a pretty drastic pace, so I had to stir things back up. I will definitely take the second place. I think we have our work cut out for us, but we made pretty decent steps forward today.”

Bobby Fong rode his M4 ECSTAR Suzuki to third place, the Californian getting back on the podium after a three-race hiatus from the top three. Fong closed on Scholtz at the end of the race, eventually finishing less than a second behind the South African.

“It was good,” Fong said. “We were struggling a little bit this weekend. Yesterday we had a little mishap with the motorcycle, but we bounced back today. I wish I was there at the beginning of the race. I don’t know what I was doing. I felt like I lost a few seconds in the first beginning laps, but once we got the momentum, we started clicking off some pretty good times at the end. I could see Matty (Scholtz). I was gaining on him a little bit at the end. Toni (Elias) kept me honest, for sure. It was plus zero for most of the race. I gained two seconds and then he got it back down to one. So, he was definitely keeping me honest out there and making sure I hit my marks. We’re happy to get back on the podium and looking forward to increasing our pace in the beginning of the race.”

Fong’s teammate Toni Elias ended up fourth, some 10 seconds ahead of the struggling Gagne, who in turn was some 22 seconds ahead of Scheibe Racing BMW’s Josh Herrin. Ride HVMC Racing’s Corey Alexander was seventh with FLY Racing ADR Motorsports’ David Anthony ending up eighth.

Travis Wyman Racing’s Travis Wyman was ninth, one spot better than his brother Kyle, on the KATO Fastening/KWR Ducati. Kyle Wyman was running fifth when he had an off-track excursion.