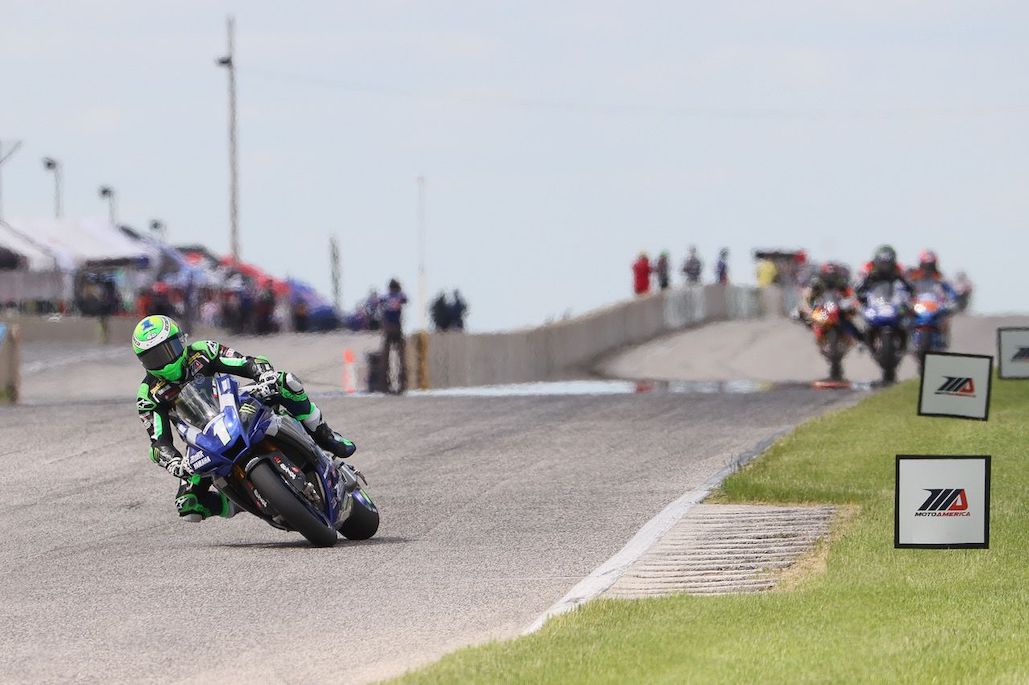 Stop rubbing your eyes, you have seen this before. Monster Energy Attack Performance Yamaha’s Cameron Beaubier won his third successive race of the 2020 season on a sunny Saturday at Road America, the four-time defending MotoAmerica Superbike Champion winning his third straight race in Wisconsin as he continued his mastery of the HONOS Superbike class.

Beaubier led this one flag-to-flag, beating M4 ECSTAR Suzuki’s Bobby Fong by 6.325 seconds, which was less that his previous wins here three weeks ago when he won by 7.8 and 14.3 seconds, respectively. In winning today’s race, Beaubier became the all-time winningest rider at Road America with his 10th Superbike victory. It was also the 41st win of Beaubier’s Superbike career.

“To be honest, those first couple laps when I was trying to hang it out and open a gap, it wasn’t comfortable,” Beaubier said after winning in front of large crowd. “I didn’t have nearly the amount of grip up front and in the rear that we have yesterday morning and also this morning. I think the track temperature was just pretty high and it got pretty greasy out there. So, I wasn’t really able to roll the corners exactly like I wanted to. Once I saw that the gap started opening, I just tried to hit my marks and ride consistent. Hats off to both these guys. Bob (Fong) really upped the pace this morning and got me a little worried going into the race. I had obviously a pretty comfortable gap yesterday, but today wasn’t that case. We’re going to go try to improve what we can improve on our bike. Regardless, my R1 is just working so good right now. I’m really comfortable on it. Just hope to keep it going.”

The runner-up spot was Fong’s best finish of the season after his fourth and DNF from round one.

“We did a lot of homework,” Fong said. “We definitely improved the bike. The lap times didn’t show it today compared to last round, but we definitely improved the bike quite a bit. I’m okay in the first sector, the second and the middle, but I’m losing maybe four tenths, three tenths a lap just in the last sector. We’re messing with the electronics a lot. We don’t know exactly where to go with the electronics on the last sector. Just figuring it out. It’s just a puzzle. We’re putting it together piece by piece. I am working on trying to ride a little bit differently. Last round it seemed like I was charging stuff a little too hard. So, I’m backing off a little bit. Hopefully, we can find something today and bring it tomorrow.”

Third place today went KATO Fastening/KWR Ducati’s Kyle Wyman, the New Yorker in a battle for most of the race for the position. The war went to the final lap with Wyman making a pass in the chicane before Elias retaliated. Elias beat Wyman to the line, but it was determined that he’d passed under a standing yellow flag at the marshal post and was docked two seconds. That bumped Elias back to fourth, which took him off the podium but still gave him his first championship points of the season after his dismal opener in Road America 1.

“When you’ve been off the pace for a while you go into the race wondering if you have the pace,” Wyman said. “What are you going to have? So, I just got as good a start as I could. I was second. I was alongside Cameron (Beaubier) going into turn one. I was just so upset with myself last month, not being able to tag onto the front guys right away, not even for two or three laps. I was really determined to get the thing up there. It turns out I got into a really, really long, long battle with Toni (Elias). I just kind followed him and figured out where he was stronger or weaker. I could make a lunge into the chicane if I stayed close enough to him through the carousel, so that’s what I set up. Honestly, that’s what got me to the podium even though he passed me back. If I wasn’t able to make that move, there would have been no passes probably at all, because I wasn’t strong enough to get into Canada Corner. So to get in there in front of him, to get out of the chicane is what got us here. He rode awesome. I’m happy me just being up here. It’s a long road, but we’re back to the podium after three years.”

Westby Racing’s Mathew Scholtz finished fifth, the South African getting a bad start and never really recovering. Beaubier’s teammate Jake Gagne was next, the Californian battling for third early on before having a mechanical issue that forced him to slow and then recover for sixth.

After three races, Beaubier leads the title chase with a perfect 75 points. Gagne retains second with 46 points, six more than Wyman’s 40 points. Herrin is fourth with 35 points with Fong moving to fifth with 33 points.