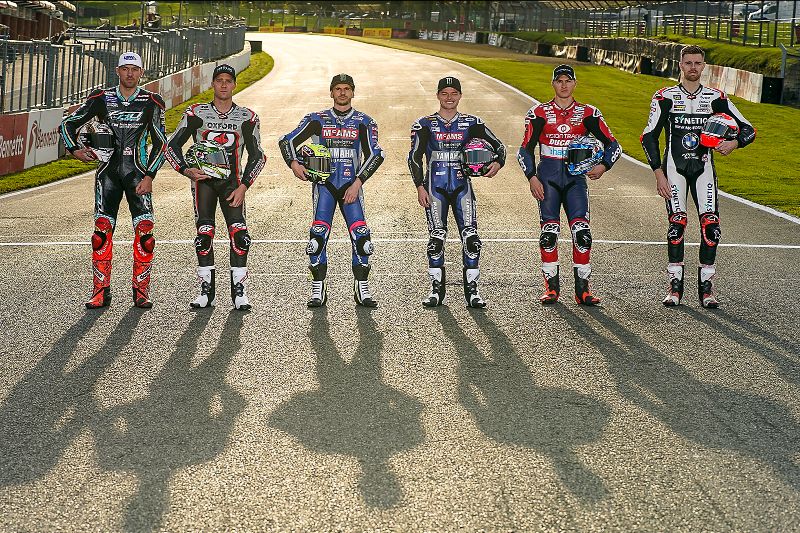 The Bennetts British Superbike Championship’s 25th anniversary season is set to end in sensational style with an epic Showdown finale on the Brands Hatch Grand Prix circuit this weekend (October 15/16/17).

The top four Title Fighters arrive in Kent for the decider, separated by just 21 points – the smallest margin separating the leading quartet in the standings since the Showdown was introduced in 2010.

Tarran Mackenzie leads his rivals, with a 10-point advantage over his McAMS Yamaha teammate Jason O’Halloran. The younger son of multiple champion Niall Mackenzie is hoping to emulate his father on the 25th anniversary of his first title.

Whilst Mackenzie has rapidly ascended to the top of the standings with his performances in the last two rounds, O’Halloran has had a contrasting experience in the Showdown so far. The Australian was runner-up last season and had a 30-point advantage heading into the Showdown.

Two crashes at Oulton Park demolished O’Halloran’s Showdown advantage as Mackenzie moved to the top with his strongest performance yet at the Cheshire venue.

Whilst the McAMS Yamaha pairing still lock out the leading two positions, a hat trick of podium finishes at Donington Park allowed Christian Iddon to more than halve their advantage in the points ahead of the final three races at Brands Hatch. The VisionTrack Ducati rider now trails by just 15 points ahead of his final push for a first title.

Tommy Bridewell in fourth remains just 21 points adrift of Mackenzie at the top. The Oxford Products Racing Ducati rider heads to the decider, hoping to replicate the form which carried him to a double win at Oulton Park.

Whilst the leading four head the pack, Peter Hickman and Danny Buchan also remain in mathematical contention. The Title Fighters also know that there will be Showdown spoilers in the mix as the other riders in the field aim to end the season on a high.

After 30 races in 2021 so far there have been eight different race winners and a further seven podium finishers. The only thing that is certain ahead of this weekend is that there will be a new Bennetts BSB champion crowned on Sunday.

Tarran Mackenzie – McAMS Yamaha
Championship leader
“I am going into the last round with a ten point advantage, which is an advantage which nobody else has got so I can’t be disappointed with how Donington Park went. Those ten points we have going into this weekend could be very valuable come Sunday night!

“It is close; the Ducati has been strong there with Bridewell and Iddon and Brookes too last year, and I have a strong teammate in Jason so it is pretty even and nobody has a real advantage bike or track wise – that makes it even more exciting really!”

“I am not changing my approach for the final round as it has worked the last few rounds, so I feel quite chilled out. I like to think I don’t really get flustered about things.

“I need to do the first race, see where I am at within the championship and play it how we need to on Sunday. I might be in a better position or I might be in a worse position, so I just need to make sure I do my normal weekend.

“If I do need to play it differently for any other reason on Sunday then great. Maths is not my strong point, so I need to take my normal approach! I am just excited about Brands Hatch, I am not nervous, just excited to get going!”

Jason O’Halloran – McAMS Yamaha
Second in the standings
“All I wanted to do with how it was at Donington Park was to still go to Brands Hatch with the opportunity to win and that is what we are doing.

“I obviously won at Brands Hatch earlier in the year and I have had really good results there and I love racing there, so it is a good place to end the season. There is no reason why, with the settings that we have, we should be somewhere near the front.

“It is a high pressure weekend for everybody, three races and four of us separated by a small amount of points and anything can still happen. We have just got to try and put our best foot forward, have a good performance in all three races and see what happens.

“Everyone is in a similar boat, it is so close on points that we have to go into the weekend with the same attitude – there is no defending from anybody, you are going to have to win races to win the title. It’s not like anyone has enough points to roll around in third or fourth and win, that won’t happen.

“For me, I want to enjoy the weekend – I have had an amazing year and won lots of races and unfortunately we are in this position because of the last two rounds. That’s just life, so we have to put that behind us, put our head down this weekend, try to win some more races and hopefully we can come out on top.”

Christian Iddon – VisionTrack Ducati
Third in the standings
“The championship is fully in shot; I am in a similar scenario to Donington and that I need to have a good race on Saturday to reduce the deficit, to be genuinely within a shot on Sunday.

“From the outside looking in there is not a lot between the Yamahas and I don’t think they will work for each other, so that will be an interesting scenario.

“I need to make sure I reduce the deficit on Saturday and then it will be all to play for on Sunday, but given that there are so many riders who are fast, the points can change quite a lot, especially if they are between us and that can create a big swing. I am up against the title rivals as well as everyone else!

“It will be a bit like the first round of the series where everyone wants to show what they have got and prove themselves for a number of different reasons. It won’t be just the Title Fighters trying to win races, there will be a lot of others in the mix too and they can have a big impact.”

Tommy Bridewell – Oxford Product Racing Ducati
Fourth in the standings
“For me the job is simple; for me there is still pressure on my shoulders as I feel that I have a lot to lose if I don’t win the championship, but it is going out at Brands Hatch and being smart. That is where the team come into play, as I need to know the information of what is going on, especially on Sunday.

“There is a big spot light on the top four, but the biggest influence on that I believe will be the other riders and the good thing for me is that the racing in BSB is so close. If I am out front and win race one, and the other three get mixed up between some of the other riders, all of a sudden I could have a massive points haul over them in one race.

“I have got to come out and not be worried about building points, I need to come out and just ride. If I am honest, I feel Tarran has a massive weight on his shoulders now; before it was on Jason as he was leading but unfortunately for him it has gone a bit wayward and now it’s Tarran flying the flag – the pressure is on their shoulders.

“I believe they might well stumble or crack under pressure themselves and I might not need to have to influence that. At the end of the day for me, it is about going out and trying to win all three races, and if I can do the best we can then what will be, will be.”