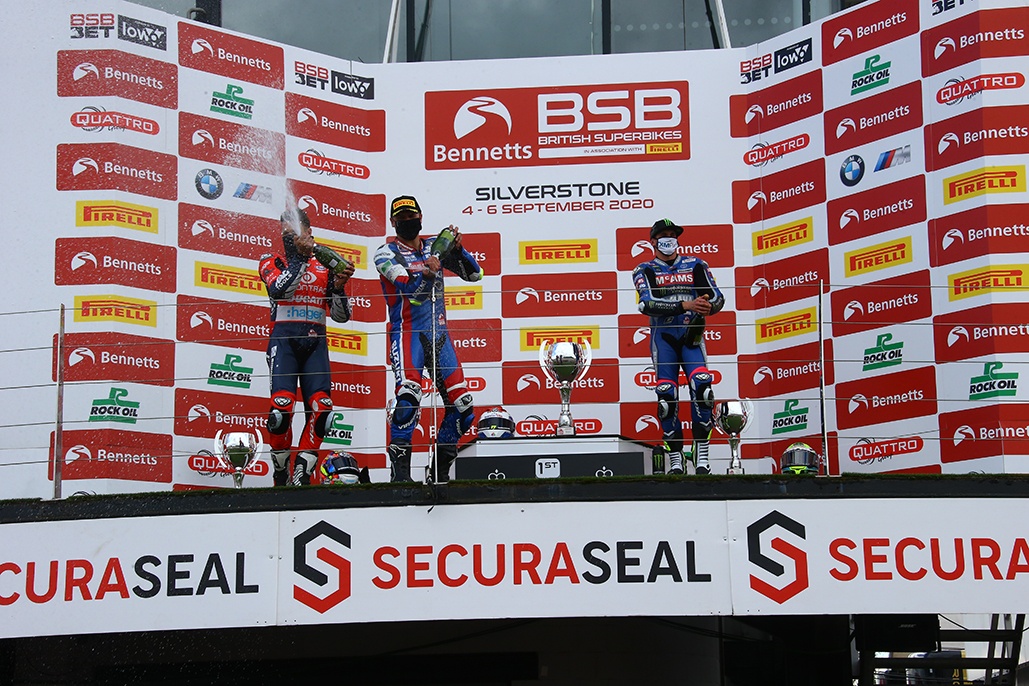 Kyle Ryde delivered an inch-perfect performance at Silverstone today for Buildbase Suzuki, claiming an emotional debut race win in the Bennetts British Superbike Championship, to become the seventh different rider to achieve victory in 2020, as the team became the fifth different winning team.

At the start of the second race of the weekend, Ryde had been dicing for the lead with Josh Brookes. The VisionTrack Ducati rider hit the front of the field on lap two, and he held the position despite immense pressure from his rival until the closing stages.

However, Ryde was able to make a move with three laps remaining to push Brookes back into second and the Buildbase Suzuki rider then posted three rapid laps to break away from Brookes and Jason O’Halloran in third, to cross the finish line with a 1m.686s advantage.

The podium battle went down to the wire; and Brookes was able to hold off O’Halloran as the McAMS Yamaha rider was back on the podium, but his teammate and yesterday’s race winner Tarran Mackenzie, was forced out of action with a technical problem earlier in the race.

Championship leader Glenn Irwin had fought himself into fourth place, after he broke clear of the chasing pack where an intense battle for fifth place raged.

After some incredibly close battles and the order constantly changing, Bradley Ray equaled his best result of the season with a fifth place for SYNETIQ BMW, holding off Tommy Bridewell who moved up the order in the closing stages.

In the third and final race of the weekend, Ryde was unstoppable and he got an electric start from pole position to lead Glenn Irwin and Brookes on the opening lap. However, O’Halloran soon dived ahead of his rival to grab third position, before snatching second place by the end of lap three.

Ryde was soon trying to make a break, and the Buildbase Suzuki rider executed it perfectly as he was able to edge an advantage over the chasing pack behind him where there was an intense battle for the podium positions.

O’Halloran was holding off Glenn Irwin, despite the McAMS Yamaha rider trying to get ahead of Ryde in the early stages of the race for the lead.

Christian Iddon meanwhile had moved into the mix for the podium fight, and by lap ten he was holding third place ahead of Mackenzie and Glenn Irwin.

At the halfway point of the race, Iddon was able to make a decisive move on O’Halloran for second, but over the final ten laps he started dropping back through the field, and on the final lap the battle for fifth was a Ducati dogfight.

Iddon had held the advantage from Brookes and Bridewell at the start of the final lap, but as they took the chequered flag, the trio had shifted with Bridewell emerging ahead of Brookes and Iddon as they crossed the finish line.

The battle for second meanwhile had intensified between the McAMS Yamaha teammates with Mackenzie able to fend off the challenges from O’Halloran to claim second place as they celebrated their strongest weekend of the season.

Glenn Irwin finished Round 9 in fourth place, but the points still give the Honda Racing rider the edge in the championship standings ahead of the next three races at Oulton Park later this month.

Kyle Ryde (Buildbase Suzuki)
Round 8 and 9 winner
First Bennetts BSB win
“It is hard to explain how I felt after winning the race; it was unexpected and that was probably fifty percent of the emotion in parc ferme. The other half is probably because I have had a couple of up and down years so it is almost like I want to thank Steve and the Buildbase Suzuki team for the faith they had put me in me this season.

“I am so happy to have won. I had picked the time to try to pass Josh with eight laps to go and I tried to pass him about four times, but it was risky and I didn’t want to take us both down when I had a podium on the cards. I played it safe and got through and then did three qualifying style laps to get a gap and I wasn’t sure how much I had, but I am over the moon.

“I just wanted to stay out of trouble in the last race and I saved the tyre, then pulled the pin at maybe lap 15 and thought if anyone came with me then let’s go! I tried my best, kept a good rhythm and then just watched my pit board.

“I was really nervous over the last two laps as I really wanted another win and I loved every second of that race. I think today has been unexpected but it is a great feeling, and I can’t wait for Oulton Park now. The bike has been amazing today and I want to thank everyone for their support.”