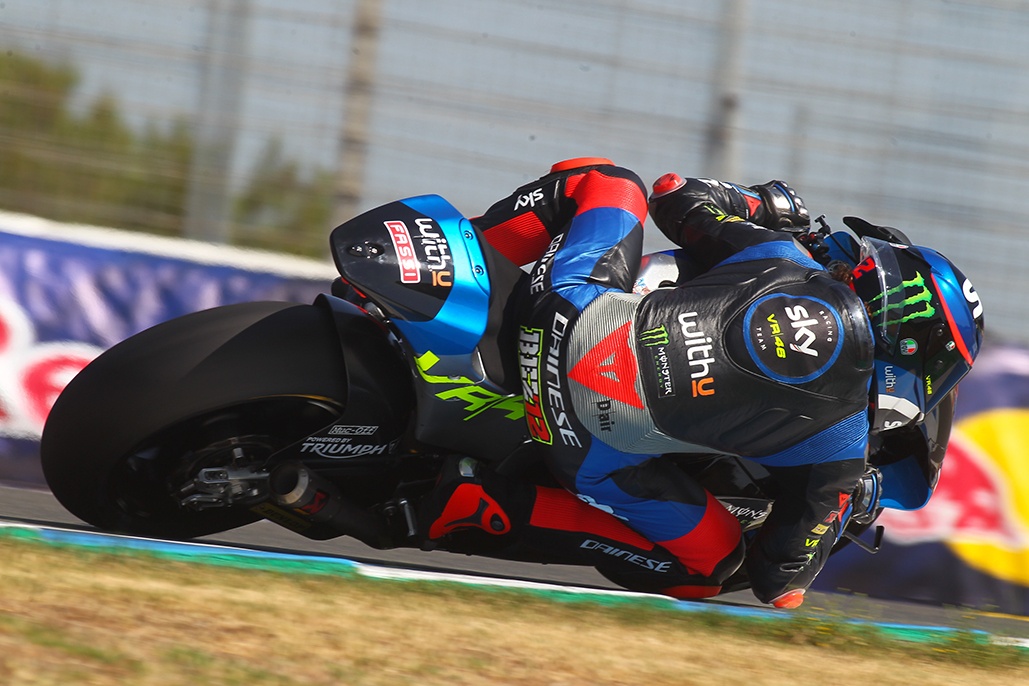 The Italian heads a top three split by less than a tenth, with the top 22 within a second on Friday.

How close do you like it? On Day 1 of the Gran Premio Red Bull de Andalucia, the Moto2™ top three were split by less than a tenth of a second, with Marco Bezzecchi (Sky Racing Team VR46) taking the spoils by virtue of a 1:41.525. The Italian crashed later in the day – rider ok – but held onto the top with his FP1 time, ahead of Championship leader Tetsuta Nagashima (Red Bull KTM Ajo) and Jorge Navarro (Beta Tools Speed Up), who was just 0.065 off the top.

Another Andalucian summer day; another set of soaring track temperatures dealt to the riders, and consequently it was the FP1 times that made up the combined standings for the majority. Bezzecchi headed that before his FP2 tip off – and small brief fire that engulfed the bike – but he was quick in the afternoon too, just 0.081 off the fastest time set by his teammate and Spanish GP winner Luca Marini. Nagashima was still just 0.059 off Bezzecchi in FP2 though, with some familiar names rising to the top in both sessions.

Behind the top three overall, two-time Jerez winner Lorenzo Baldassarri (Flexbox HP 40) was much further up the timesheets this Friday around as he took P4 at only a tenth and a half off the top, with Federal Oil Gresini Moto2’s Nicolo Bulega putting in a solid day’s work to complete the top five. Previous Jerez winner Sam Lowes (EG 0,0 Marc VDS) was sixth quickest, ahead of Spanish GP winner Marini in seventh overall.

Somkiat Chantra (Idemitsu Honda Team Asia) made a big leap up the timesheets to end Friday in 11th, ahead of a tougher day at the office for Marcel Schötter (Liqui Moly Intact GP) and his teammate Tom Lüthi. They still stand to take their provisional places in Q2 though, as does the final graduate as of Friday: Tennor American Racing’s Joe Roberts.

Can they keep their place in Q2 on Saturday morning? FP3 is the last change for the likes of Enea Bastianini (Italtrans Racing Team) and Remy Gardner (ONEXOX TKKR SAG Team) to fight back, before qualifying from 15:10 (GMT +2).