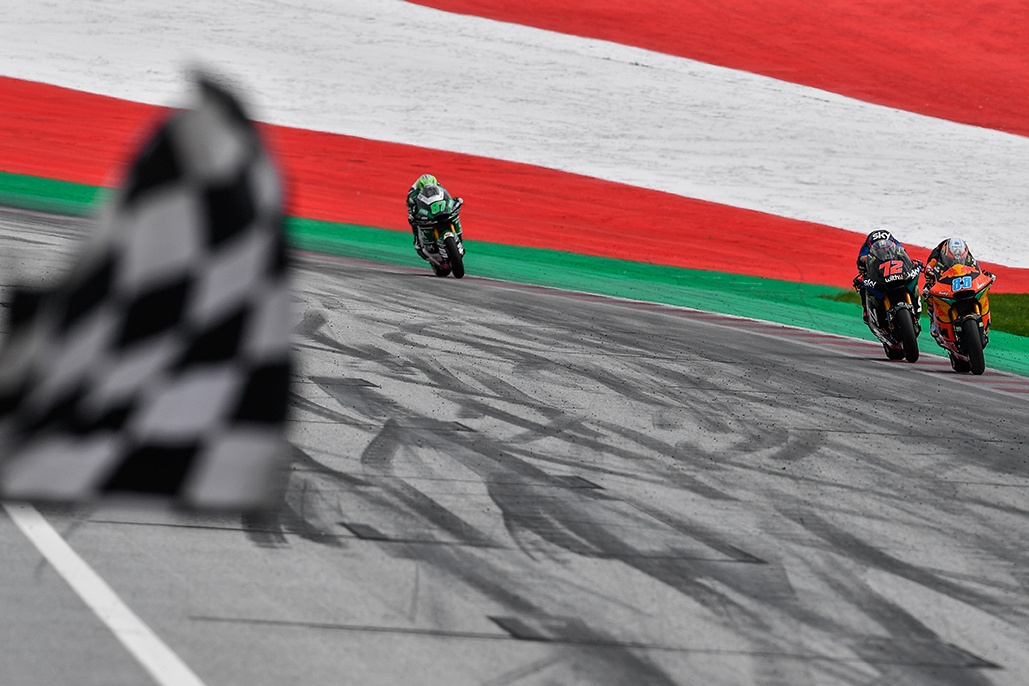 Sky Racing Team VR46’s Marco Bezzecchi has taken his first Moto2™ victory in the BMW M Grand Prix of Styria, despite coming across the line in second place behind Jorge Martin (Red Bull KTM Ajo) in a dramatic race. The Spaniard took the chequered flag and began celebrating an Austrian double only for the former Moto3™ World Champion to be told in Parc Ferme he needs to park in P2, not P1, after exceeding track limits on the exit of Turn 8 on the final lap. As a result, Bezzecchi stood on the top step of the podium, alongside him Martin and Remy Gardner (ONEXOX TKKR SAG Team) as the Australian took third for his second podium.

Martin took the holeshot from second on the grid, with poleman Aron Canet (Openbank Aspar Team) settling into second behind him. EG 0,0 Marc VDS’ Augusto Fernandez then became the first faller on the opening lap as the Spaniard tucked the front at the final corner out of fourth place, before rookie Canet then joined him in the gravel, tucking the front after braking a tad too late downhill into Turn 4.

The second of the EG 0,0 Marc VDS riders, Sam Lowes, then crashed out too in a nasty incident at Turn 3. The Brit got it wrong on the brakes and wiped out Somkiat Chantra (Idemitsu Honda Team Asia) and Jorge Navarro (EG0+ Speed Up) in the process, rejoining but the Brit then handed a black flag for his error. Not long after though, his race came to an end with a second crash instead of pulling out of the race due to his disqualification.

Despite the early drama, there were still 15 laps to go when Gardner edged his way past former title leader Tetsuta Nagashima (Red Bull KTM Ajo) for second, with Bezzecchi right on the Japanese rider’s tail too – and the number 45 then demoted back to fourth moments later. Bezzecchi got the job done for third into Turn 4, and was on his way.

Five further laps ticked by before Bezzecchi was then able to draft his way past Gardner on the run up the hill towards Turn 3, but the Australian was imperious on the brakes, coming from a postcode further back to somehow get back under the Italian. However, the Aussie’s lunge hampered his drive out of Turn 3 and Bezzecchi took the place back before then tapping the rear of his Kalex to indicate he felt he had the pace to chase down the race leader…

Martin, up to this point, had had a fairly uneventful race… but that was all to change with Bezzecchi putting together the late charge of all late charges. 1.8 seconds was the Spaniard’s advantage before that then became 1.2 seconds with six laps left. In the space of two laps, the advantage was halved to 0.6 of a second and suddenly the former Moto3™ sparring partners were about to go to war in Moto2™ for the first time.

Time was running out for Bezzecchi though, he only had two laps left to find a move on Martin, who himself was desperately trying to respond. The pair entered the final lap with nothing between them and despite all the pressure, Martin came across the line to seemingly clinch a Red Bull Ring double with victory in the Austrian and Styrian Grands Prix.

However, upon review, Martin did exceed track limits by the narrowest of margins on the exit of Turn 8 on the final lap. The Spaniard was consequently was demoted one place, meaning Bezzecchi’s late pressure had paid off and he was a Moto2™ race winner for the first time in his career – a week after Martin achieved the feat…

Gardner was a second adrift of the top two in third, but he secured his second career rostrum as he took his first trip to the podium since Argentina last year. Nagashima will be hoping to reignite his title challenge after taking fourth, his best result since a hat-trick of finishes outside of the top ten. Completing the top five was Liqui Moly Intact GP’s Tom Lüthi as the veteran got back in the mix at the front after some tougher races so far in 2020.

That’s it from Styria, now we take a breath and reset before another triple header – starting at Misano World Circuit Marco Simoncelli.

Marco Bezzecchi: “It was strange to arrive second and then switch! All the race I was strong but not strong enough in braking to overtake Jorge. I pushed a lot to make the gap and the tyres were a bit on the limit. But i knew that and I said ok I’ll put some pressure on him and maybe he’ll make a mistake. When I came out of T8 I saw he touched the green a bit, I was very close but I thought it was possible… I was very happy for the podium though because the race started in a difficult way, I hit a neutral at Turn 3 and a lot of riders passed me, then I started to overtake and go up the standings, when I found myself in second I checked the board and I was 1.9, 1.6, 1.1… 0.9… but like I said I was on the limit a bit on the front. But I’m incredibly happy, I want to thank my family and my team, they did an incredible job and gave me the happiness to make these results, so I’m very happy.”