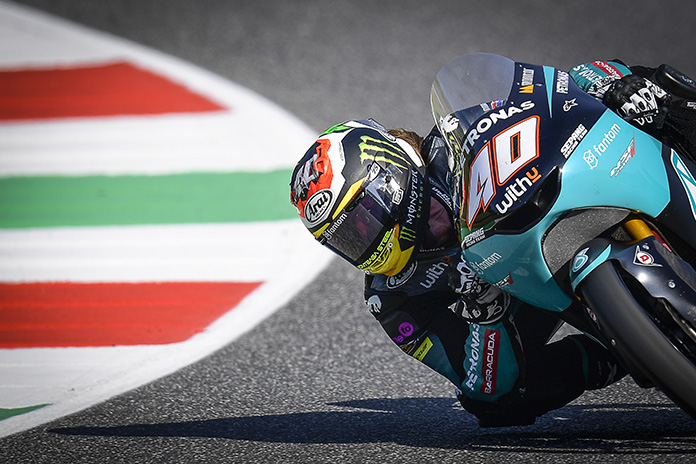 The South African leads the way, with Foggia and McPhee for closest company as Moto3™ get reacquainted with Mugello.

Darryn Binder (Petronas Sprinta Racing) leads the way after Friday at the Gran Premio d’Italia Oakley, the South African timing it to perfection to slipstream to the line and end the day two tenths clear at the top. Dennis Foggia (Leopard Racing) slotted into second even later in FP2, with John McPhee (Petronas Sprinta Racing) completing the top three overall on Friday.

Championship leader Pedro Acosta (Red Bull KTM Ajo) ended the day in P16, the rookie getting his first taste of Mugello on Moto3™ machinery this weekend.

FP1
Under the Tuscan sun of the Mugello morning it was Gabriel Rodrigo (Indonesian Racing Gresini Moto3) moving the goalposts furthest mid-session, but 2014 winner Romano Fenati (Sterilgarda Max Racing Team) was flexing his pace with a consistent run of speed in the latter stages of FP1. Compatriot and 2017 Mugello winner Andrea Migno (Rivacold Snipers Team) hit back though, nearly half a second clear by the end of the session. Red Bull KTM Ajo’s Jaume Masia took third, a tenth and a half off Fenati.

Niccolo Antonelli (Avintia Esponsorama Moto3) was another two tenths down in fourth, but it tightened up just behind the number 23. Binder was within 0.014 of the Italian and Deniz Öncü (Red Bull KTM Tech3) within 0.015 of the South African, which is no mean feat from the Turk as he rides at the track for the first time in the Moto3™ World Championship.

There were no crashes in FP1.

FP2
The afternoon was when Binder took over on top, the South African tucking in behind Andrea Migno to set his fastest effort, completing a consistent day of speed in Italy from the number 40. Foggia and McPhee struck late in the rush to complete the top three, with Fenati taking fourth and Rodrigo completing the top five in the session with more good speed.

In the afternoon, and with no one having crashed in FP1, Championship leader Acosta took the dubious honour of the only crasher of the day, but the rookie sensation was up and ok; more focused on a solid step forward made in the afternoon despite a more difficult FP1.

Combined Timesheets
Everyone improved in the afternoon, so the FP2 timesheets and the combined timesheets are one and the same. That leaves Binder leading the way from Foggia, McPhee, Fenati and Rodrigo.

Tatsuki Suzuki (SCI58 Squadra Corse) is sixth overall after a P12 in FP1, with the top ten on the combined times completed by Öncü, Antonelli, Migno and Masia.

Riccardo Rossi (BOE Owlride) ends the day in a solid P11 fresh from his first podium, with 2019 Red Bull MotoGP Rookies Cup Mugello race winner Carlos Tatay (Avintia Esponsorama Moto3) in P12 on his first race weekend in Moto3™ at the track. Stefano Nepa (BOE Owlride) and Jason Dupasquier (CarXpert PrüstelGP) are the last two currently on for a place in Q2, with Ayumu Sasaki (Red Bull KTM Tech3) pipped to it by just 0.017 in fifteenth. The Japanese rider is on a consistent run on race day and is the first name looking to move forward in FP3.

The second, who was also second to Tatay in that Rookies race at the venue in 2019, is rookie Pedro Acosta. The Championship leader, Sasaki, Le Mans winner Sergio Garcia (Valresa GASGAS Aspar Team) and French GP first time podium finisher Filip Salač (Rivacold Snipers Team) are just some of those looking to move up on Saturday morning, with FP3 set to begin at 9:00 (GMT +2) to decide who goes straight through to Q2.