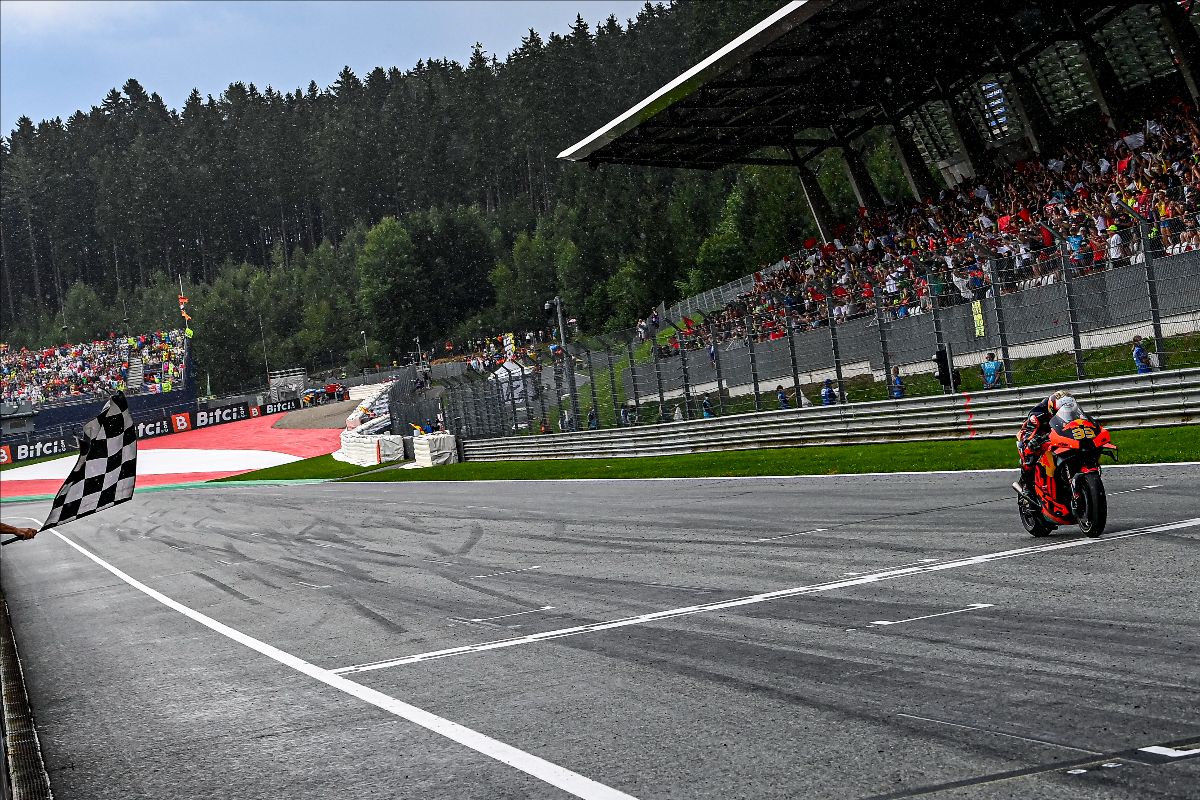 The South African gambles big and takes the house with a stunning wet win on slicks in Spielberg.

Fortune favours the brave! That certainly rings true this Sunday but it takes more than bravery to wrestle a MotoGP™ bike around a wet track on slicks, with a race win on the line, in your factory’s home race. It also takes some serious skill and talent. But Brad Binder (Red Bull KTM Factory Racing) had the perfect mixture of each to take victory in the Bitci Motorrad Grand Prix von Österreich, the South African disappearing down the start finish straight alone to hold his nerve as those around him peeled into pitlane in an all-time classic flag-to-flag. He somehow pulled it off for a second premier class win and the first for the Red Bull KTM Factory Racing team on home turf: Sunday rider, on many occasions, is the highest of compliments.

Behind the sheer daring of the man in the lead, the fight for second was instead an electrifying charge from those who made the opposite gamble. In the end, it was won by Francesco Bagnaia (Ducati Lenovo Team) as the Italian put on a show that, on nearly any other Sunday, would have likely delivered him a maiden MotoGP™ win. And behind him, Styrian GP winner and rookie Jorge Martin (Pramac Racing) found some more magic, another who switched to wets and charged through to make it work.

It started well for the Spaniard too and it was Martin took the holeshot, the rookie once again solid under the added pressure of pole, with Fabio Quartararo (Monster Energy Yamaha MotoGP) and Johann Zarco (Pramac Racing) getting a little too close for comfort and heading wide – allowing Bagnaia through into second. And as the White Flag came out to show some spots of rain, meaning riders were allowed to change bikes, Bagnaia took over at the front and Marc Marquez (Repsol Honda Team) found himself the sole Honda in a Ducati armada at the front. Quartararo dropped down to sixth behind Jack Miller (Ducati Lenovo Team), although he did hit back as Joan Mir (Team Suzuki Ecstar) watched on behind that duel.

Bagnaia pounded on at the front, with Martin trying to attack but losing out from the move. So Bagnaia it remained, with Quartararo charging back through into second and even taking the lead as the rain flags came out… again. But Bagnaia muscled back through at Turn 1, and Marc Marquez homed in on El Diablo to boot.

Bagnaia, Quartararo, Marquez, Martin and Zarco marched on, with Mir then battling past Miller to become the man on the chase. And soon enough the top three started to pull away, Mir reeled in the Pramac riders, and the Brad Binder Sunday charge was well underway as the South African homed in on Miller. From tenth on the grid, the number 33 was on the way.

Suddenly, drama then hit for a frontrunner as Zarco crashed out. Sliding off at Turn 9, the Frenchman’s Championship charge took a dent as he couldn’t get back on either. And not long after, Quartararo headed a little wide… allowing Marquez to get back on the chase after Bagnaia. And with 7 to go, the eight-time World Champion struck for the first time. Bagnaia hit back, but a few cards were on the table.

With five to go, and the rain flags still out, the first gamble: Miller and Alex Rins (Team Suzuki Ecstar) pitted, rolling their dice earlier than the rest as Bagnaia continued on at the front. But what had started to seem a clear trio was fast becoming a six-man freight train as Martin and Mir homed in, and the Jaws music could start to fade in: Binder was coming. The South African didn’t win on on one gamble.

With 4 to go, Binder was on the scene, Martin was already past Quartararo for third, and Bagnaia headed wide at Turn 1, giving Marc Marquez the lead. In the braking zone for Turn 3, Martin screeched up the inside of Bagnaia, and then Quartararo pulled off the perfect dance between madness and excellence to shoot past both, back into second. The shuffle continued, and the rain got heavier and heavier. By the time the six-rider train reached the pit entry, there was a clear decision for five of them: it was time to change. So Marquez, Bagnaia, Martin, Quartararo and Mir headed in to swap… and a lone KTM swept round the final corner and tucked in down the main straight. Binder was going all in.

Out of pitlane, the five were Marc Marquez leading Bagnaia – and both immediately hammering it – with Martin next up, Mir in fourth of the group and Quartararo losing out slightly at the rear of the train. But Bagnaia headed in hot at Turn 3 and lost out to Martin… and then Marc Marquez slid out. A lowside at Turn 1 saw the number 93 lose a shot at the podium, with Bagnaia leading Martin and both taking over in the fight back through. Mir and Quartararo also headed well wide, with the clock ticking and just under 2 laps to go.

When he made the decision to stay out, Binder had been a few of seconds ahead of Aleix Espargaro (Aprilia Racing Team Gresini), who also gambled on slicks and was in second. By the time the number 33 crossed the line to start the penultimate lap, the South African was 7 clear. Starting the final lap, the gap was over 11.

Bagnaia and Martin, meanwhile, started that final lap in eighth and ninth. And by halfway round, the two were cutting through Binder’s fellow gamblers like there were two categories on track. Second and third were locked down well before the final corner, with the two pushing to perfection to cut the gap.

Ahead of them, though, arguably the wrong decision was turned into the perfect hand in the right hands. Binder’s final lap saw him suffer a couple of moments, but he had somehow pulled it off. In the rain, in KTM’s backyard, with the brakes suffering in the conditions and the tyres the opposite of the weather, the South African made a little more history. And this time around, it wasn’t a statistical milestone, it was pure, instant legend: add bravery and stir.

Behind Binder’s miracle ballet and Bagnaia and Martin’s charge to the podium, there was plenty to sort out. Mir made it home in a solid fourth place to make some good gains in the standings, with Luca Marini (Sky VR46 Avintia) making some magic for fifth place on slicks. Iker Lecuona (Tech3 KTM Factory Racing) had been ahead of both and in podium contention but dropped to sixth, the Spaniard getting a little less reward for his earlier bravery than he likely hoped for, but he did hold off Quartararo as the Championship leader came home seventh.

Nine-time World Champion Valentino Rossi (Petronas Yamaha SRT) was in podium contention too before the final lap and he finished eighth, but some good points for the Doctor, who was also highly entertained by the shuffle and the challenge. Alex Marquez (LCR Honda Castrol) took ninth, with Aleix Espargaro ultimately completing the top ten.

Miller’s early gamble didn’t pay off and he finished in P11, ahead of Danilo Petrucci (Tech3 KTM Factory Racing) by almost nothing. Takaaki Nakagami (LCR Honda Idemitsu) was next up, with Rins a little further out of touch behind.

The final point went to Marc Marquez, who may have gambled and lost, but still very much didn’t give up.

And so a new legend is written into the history books, with another win on home turf for KTM and a second premier class victory for Binder. How they did it, and how the South African forced fortune to favour the brave, will be a long time in the memory of MotoGP™ fans, and likely a few of the number 33’s rivals.

Quartararo remains the points leader, Bagnaia gains ground and Zarco loses some… as Mir moves onto equal points with Pecco in second. What will Silverstone bring? We’ll find out in two weeks….

Brad Binder: “When I saw everyone tipping into the pits, I saw an opportunity and I decided I’d rather risk it and crash rather than maybe get top five. It’s a big Grand Prix for us, for KTM, for Red Bull. I’ve won here in Moto2 and I know what it’s like to win here at their home GP. To do it in MotoGP is an unbelievable feeling. Huge gamble, but I’m really glad it paid off.

“I knew when there were 3 laps to go, if I didn’t come in when they did I wasn’t going to come in at all. And yeah, I made it to the end somehow! The biggest problem was no brakes, the carbon brakes were cold and as soon as the rear tyre cooled off I couldn’t open the throttle either. Somehow I made it round the track, and a couple of times I thought it was over but I kept it up straight. So happy, so happy this gamble paid off.”