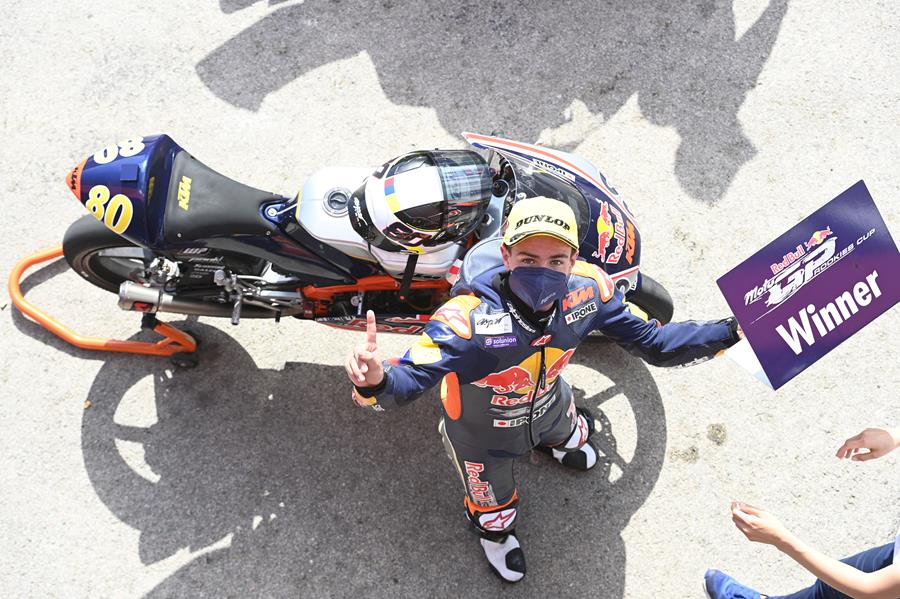 It has been an incredible start to 2021 for the Red Bull MotoGP Rookies Cup. Two thrilling races in Portimão kicked off the 15th season in great style plus 2020 Rookies Cup winner Pedro Acosta scored his second Moto3 Grand Prix win in a row to extend his World Championship lead.

Rookies Portimão double winner David Alonso was racing wheel to wheel with Acosta in last year’s Cup so is fully aware of the Cup’s extremely high level. The Colombian turned 15 on Sunday and knows he will have to dig deep to maintain his Cup points lead as the KTM RC250 Rs take to the track in Jerez this coming weekend.

They are also quite likely to be the Rookies featuring at the front in the Spanish Grand Prix weekend. It is Spaniard Holgado who is closest to Alonso in the title chase, 17 points behind and 5 ahead of Brazilian Moreira. Spanish 16-year-old Àlex Millan is a further 3 adrift and a single point ahead of fellow countryman 14-year-old David Muñoz.

After running both the preseason and the first two races at Portimão it will be interesting to see who makes the most of the switch to Jerez, especially as the Cup did not run there at all in 2020.

Certainly another two thrilling Rookies Cup races are in store and the World Championship contests also promise further success for Cup graduates adding to the existing tally of 119 GP victories and 354 podium places.