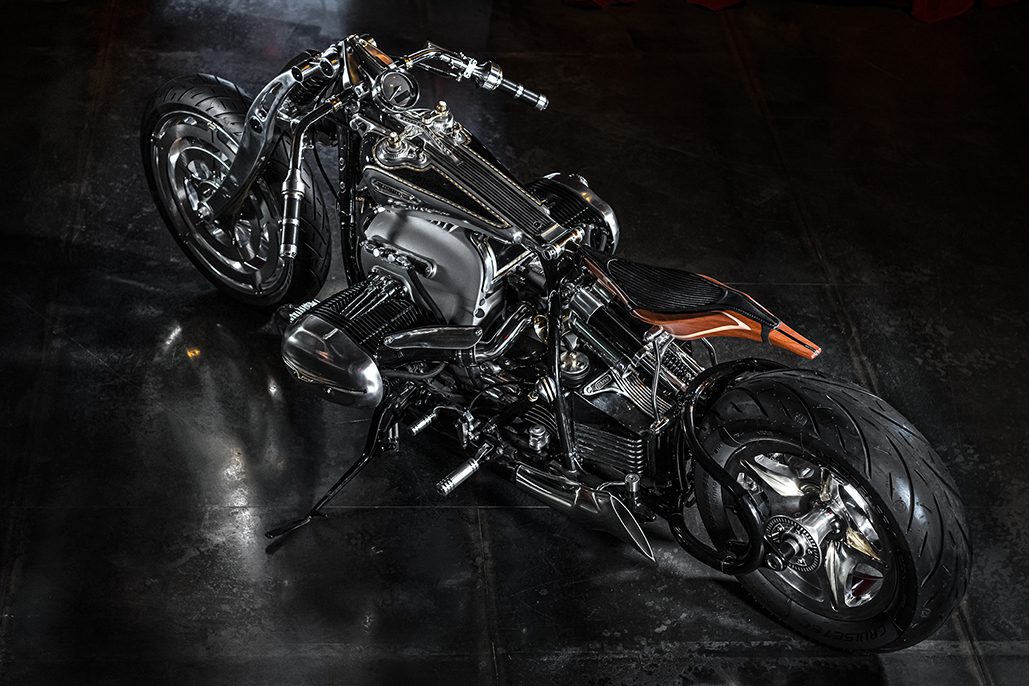 The exclusive Top Marques show in Monaco (MC) was the perfect stage to present the new BMW R 18 customisation project by Radikal Chopper.

The R 18 Magnifica has been unveiled on June 8 during the Monaco show première: an extreme reinterpretation of the German maxi cruiser where luxury, craftsmanship and the nobility of the materials used meet in this unique and fascinating motorcycle. The development of this project commissioned by Officine Riunite Milanesi was entrusted to the genius and art of Andrea Radaelli from Radikal Chopper: a happy union that with this first joint project gave birth to Radikal Design.

BMW R 18 Magnifica.
Handmade, using noble materials such as brass, aluminium and wood, with a design unlike any other custom: this is the identikit of the BMW R 18 Magnifica. The idea of building a custom bike based on the BMW R 18 is due to Raffaello Polchi, owner of Officine Riunite Milanesi and a lifelong motorbike enthusiast, but the project and the hand are by Andrea Radaelli of Radikal Chopper, a well-known name in the sector and already winner of the MBE Award 2020 with his Ad Maiora: a special edition built with maniacal care starting from a BMW R 1100 S. The approach followed in the making of Radikal Chopper motorbikes is really radical, and the design of the R 18 Magnifica is not different. According to Andrea, “the bike has to be my own creation, I don’t feel like dredging up or modifying a concept already set up and done very well by others.” The inspiration for the design of the BMW R 18 Magnifica winks at the vintage motorbikes of the 1920s, 30s, and 40s and in particular the BMW R 37, objects that “have an incredible charm that even today many modern motorbikes cannot replicate”. The use of a particular material such as wood is a strong reminder of the motorbikes of the past, which used it for certain details such as the grips; an idea that also came to mind when thinking of the old BMW cars of the 1940s with wooden steering wheels. The use of this material also responds to the desire to put something ‘alive’ on the motorbike. Moreover, the wood fits coherently with the design of the R 18 Magnifica, giving this custom a chic, retro, and modern effect at the same time.

Hand-forged from noble materials.
No CAD or render as a starting point, but at most a sketch of the bike: the rest is all down to the creative imagination of Andrea Radaelli. The R 18 was initially considered without all the elements necessary for series production and then rethought respecting the proportions between the front and rear of the bike, to achieve a harmonious visual logic. Nothing on the R 18 Magnifica is bought, everything (or almost everything) has been thought out and built by hand. The exception are the rims, machined from billet and machined with numerically controlled machines, but always to a design by Radikal Chopper. Even the innovative brake discs and callipers were specially created. Tail and seat are one-piece suspension and give the idea of floating in the air. The rear end is mahogany with a polished stainless steel centre section, giving the motorbike a jewel-like appearance. The forks have the same slope as the original ones but a look reminiscent of those on vintage motorbikes, inside, however, they are completely modern, built from billet parts. The electrical system has not been modified; everything is fully functional. The dimensions, rims, and tyres have remained true to the original: the bike is perfectly serviceable. Beneath the retro aesthetics lies a technologically modern motorbike, lightened by around 100 kg: the weight of the BMW R 18 Magnifica is in fact around 250-260 kg, compared with 345 kg for the original model.