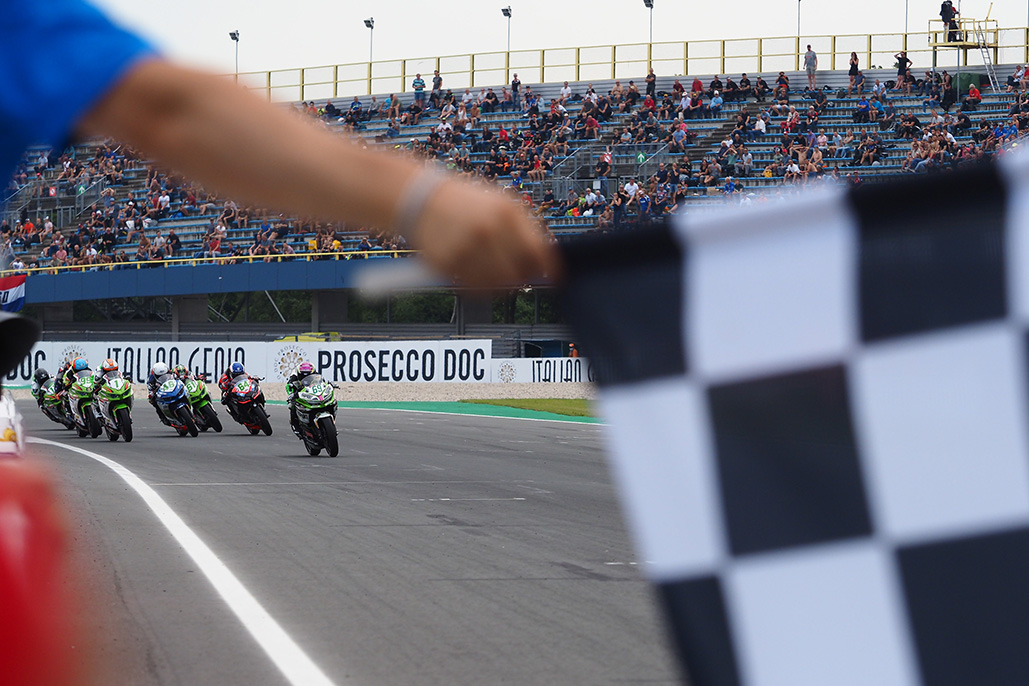 The British rider had crashed out at the final corner in the previous two races but claimed victory after a typically frantic WorldSSP300 race at Assen
The final race of the FIM Supersport 300 World Championship was full of action at the TT Circuit Assen for the Prosecco DOC Dutch Round with British rider Tom Booth-Amos (Fusport – RT Motorsports by SKM – Kawasaki) claiming a victory as he looked to make up for recent errors that cost him high-scoring points in the last two races.

Booth-Amos claimed victory after being given a nine-place grid penalty for slow riding earlier in the weekend, one of nine riders to be given that penalty for the same offence, as he looked to close the gap to Adrian Huertas (MTM Kawasaki) at the top of the Championship. Booth-Amos claimed Kawasaki’s 90th podium in WorldSSP300 with his second victory of the season. Hugo De Cancellis (Prodina Team WorldSSP300) claimed his second podium of the season with second place, ahead of fellow French rider Samuel Di Sora (Leader Team Flembbo); the first time two French riders have been on the WorldSSP300 podium together.

Jeffrey Buis (MTM Kawasaki) finished in fourth place after being demoted two positions for exceeding track limits twice on the final lap, with teammate Adrian Huertas in fifth; the Spanish rider given the same penalty as Buis for the same offence. Yuta Okaya (MTM Kawasaki) was sixth as MTM Kawasaki secured a top six finish with three of their four riders; Koen Meuffels finishing in ninth.

P1 Tom Booth-Amos (Fusport – RT Motorsports by SKM – Kawasaki)
“I’m very happy today after my crash yesterday. It was nice to repay the team with the win. This is a home race, they’re Dutch and German, so I can’t think them enough. It’s nice to be in front of some fans again.”

P2 Hugo De Cancellis (Prodina Team WorldSSP300)
“I’m very happy because yesterday I crashed on the last lap. I can be happy to finish a race like this. It was a very difficult race. Thanks to all my team, all my family and all the people I have with me this year because we worked a lot.”

P3 Samuel Di Sora (Leader Team Flembbo)
“It was a crazy race, actually. Very, very crazy. We struggled a little bit on the back straight but managed to put the bike on the podium again. I’m very happy, third in the Championship, I think. We will be hoping for Most, a new track for us. A big thanks to the team, they did an amazing job. I’m so happy and just want to thank them for their excellent work. Let’s hope for a win in the next race, we’ll work for it.”