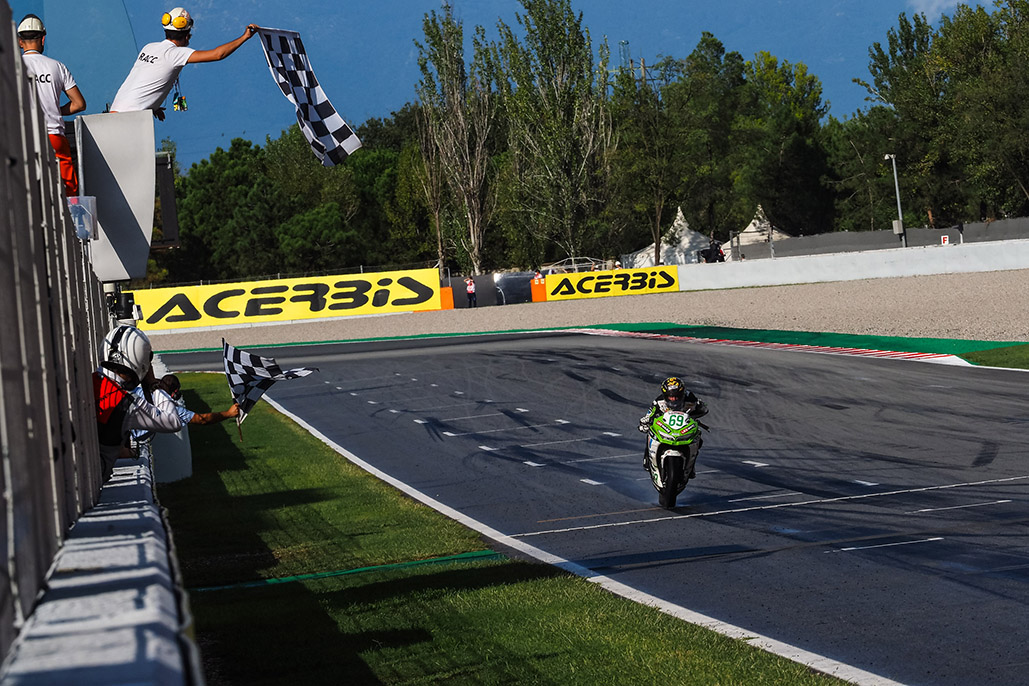 A wet but drying track made conditions tricky for all riders on the FIM Supersport 300 World Championship grid as the Championship hit the Circuit de Barcelona-Catalunya for the first time at the Acerbis Catalunya Round where Tom Booth-Amos (RT Motorsports by SKM – Kawasaki) claimed a dominant maiden victory by more than six seconds.

Booth-Amos started from pole position after going quickest in the Tissot Superpole session and led off the line to hold position despite a challenge from behind; Booth-Amos sweeping into Turn 1 into the lead and not looking back as he took his first WorldSSP300 victory. He was joined on the podium by Samuel di Sora (Leader Team Flembbo), with the Frenchman securing his first podium in WorldSSP300, and Marc Garcia (2R Racing) in third with the 2017 World Champion making his return to the Championship.

Mika Perez (Prodina Ircos Team WorldSSP300) finished the race in fourth place as Championship leader Jeffrey Buis (MTM Kawasaki MOTOPORT) finished in fifth; Buis looking like he was struggling in the first half of the race but recovered in the latter stages of the 10-lap race to finish in fifth and extend his Championship lead. Filippo Rovelli (Kawasaki ParkinGO Team) claimed a sixth-place finish as he secured his best WorldSSP300 finish.

Ton Kawakami (Yamaha MS Racing) was another who had battled his way through the field, running in the top ten in the early stages, but dropped back in a mega battle for a top ten finish, the Brazilian claiming an 11th placed finish. Alfonso Coppola (Kawasaki GP Project) was 12th with Scott Deroue (MTM Kawasaki MOTOPORT) in 13th; Deroue also fighting through the Last Chance Race. Hugo de Cancellis (Team TRASIMENO) and Meikon Kawakami (Team Brasil AD 78) completed the points-paying positions in 15th.

It was an eventful race for Angel Heredia (DEZA-ISMABON Racing Team) who had multiple incidents throughout the race, though the wildcard was able to get back on his back after each one. Paolo Grassia (Team CHIODO Moto Racing) retired from the race after an incident on the opening lap as did Inigo Iglesias Bravo (Scuderia Maranga Racing) and Nick Kalinin (Battley RT-RT Motorsports by SKM-Kawasaki). Bruno Ieraci (Kawasaki GP Project) came off his bike and retired from the race although he did look to return to the track, while Kim Aloisi (ProGP Racing) had a similar accident at Turn 2.

P1 Tom Booth-Amos (RT Motorsports by SKM – Kawasaki)
“Finally, I get a win! It’s not been an easy year. After Portugal, when I had the big crash, it didn’t hurt but I hurt myself quite a lot, but I didn’t tell anyone. I just carried on through and in Aragon we struggled but our guys have worked hard in between, they only had one week but they´ve brought me a new package this weekend and it’s working really well. This is for them and I want to thank them. I’m a little bit far behind in the Championship but if we keep working and I keep winning races, it’s still possible.”

P2 Samuel di Sora (Leader Team Flembbo)
“It was a very difficult race. We didn’t know what the weather would be minutes before the start, but we made the right choice to put a good rain setup on the bike. I want to thank all the people that have brought me here.”

P3 Marc Garcia (2R Racing)
“It was amazing. Ten months without taking a bike and to come back into the Championship and get third position is amazing.”