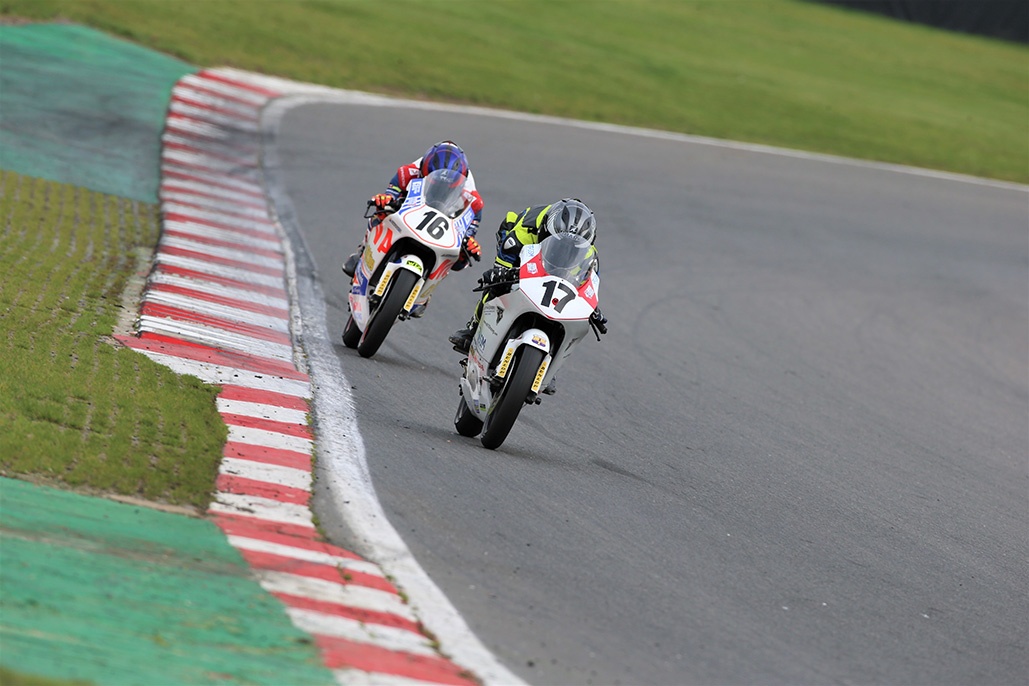 A nail-biter of a finale sees the number 17 reign supreme as drama hits for his fellow Cup contenders.

Franco Bourne (Franco Bourne/SP125 Racing) is the 2020 Honda British Talent Cup Champion. After domination in Race 1 at Brands Hatch saw him grab the momentum ahead of the season finale, the number 17 kept it clean with another stunning show of pace to win the race and take the crown on Sunday. The drama hit early for former points leader Eddie O’Shea (WAM) as he was wiped out on Lap 1, with the man in the lead on the way in, Charlie Farrer (Victoria House Academy/Mortimer Racing), then hitting similar bad luck mid-race to end his charge. Harvey Claridge (City Lifting/SP125 Racing) took second in the final race of the season, with Evan Belford (City Lifting by RS Racing) completing the podium – just.

Off the line it was Bourne in charge immediately, with Casey O’Gorman (Microlise Cresswell Racing) on the chase and Farrer just about muscling his way into third. By Lap 2 though, O’Gorman had struck for the lead, and Claridge was hustling for P3- so it was far from the immediate domination of Race 1 for Bourne.

Over the line for Lap 3 it was a four-rider fight, and Claridge was the first man on the move as he swept past Farrer. The number 71 hit back but that didn’t last long, creating a brief as-you-were. By Lap 4 though, Bourne and Claridge looked seriously impatient behind O’Gorman, and Farrer then had a big wobble in fourth to drop him slightly off the trio. Claridge decided enough was enough and took Bourne for second, and that last the two remaining title challengers in third and fourth – with Farrer having closed that gap.

Just shy of half-race distance – a shortened 13 laps – Claridge hit the front. But they were soon four abreast and Bourne emerged out front, with O’Gorman shuffled down to fourth. The number 72 hit back, and then the drama hit.

O’Gorman got it all wrong as he had a wobble that swiftly became a highside , with Farrer left with nowhere to go and the number 71 colliding with the stricken Microlise Cresswell Racing machine ahead of him. Farrer went down, and that was his Honda British Talent Cup title charge over – unless Bourne failed to make up his small deficit to the top…

Meanwhile, Bourne was back in charge at the front and the gap ever-growing, but the fight for what was now third was heating up. Belford vs Corey Tinker (Stauff Fluid Power Academy) – after also fighting it out for much of Race 1 – were back at it in a duel, and by Lap 11 it showed no sign of slowing down.

By the flag, Bourne crossed the line a stunning eight and a half seconds clear to complete the double at Brands Hatch and take the crown, the rider with the most wins in 2020 and wrapping it up in style. Claridge ends the year on a high with another podium, with that duel right behind split by hundredths.

It looked like Tinker had it, but on the blast to the line he just lost out as Belford took it by 0.057, but the two put another another stunning show. Jamie Lyons (Jamie Lyons Racing) beat James Cook (Wilson Racing) in another similarly close duel for fifth, ahead of Jonathan Garness (Microlise Cresswell Racing) in seventh. He got the better of Sullivan Mounsey (Lloyd & Jones PR Racing) by a tenth, with the top ten completed by Elliott Dufton (D&D Racing) and Ryan Hitchcock (Wilson Racing) – the latter of whom had both Harrison Crosby (Banks Racing) and Rossi Dobson (Rossi Dobson) within a tenth.

And so 2020 comes to a close with a dramatic final race of the season, and Franco Bourne lifting the crown. Farrer ends the year second, with O’Shea down in third after their bad luck. Tune in for more in 2021 – and congratulations and thank you all those who made 2020 such a success!