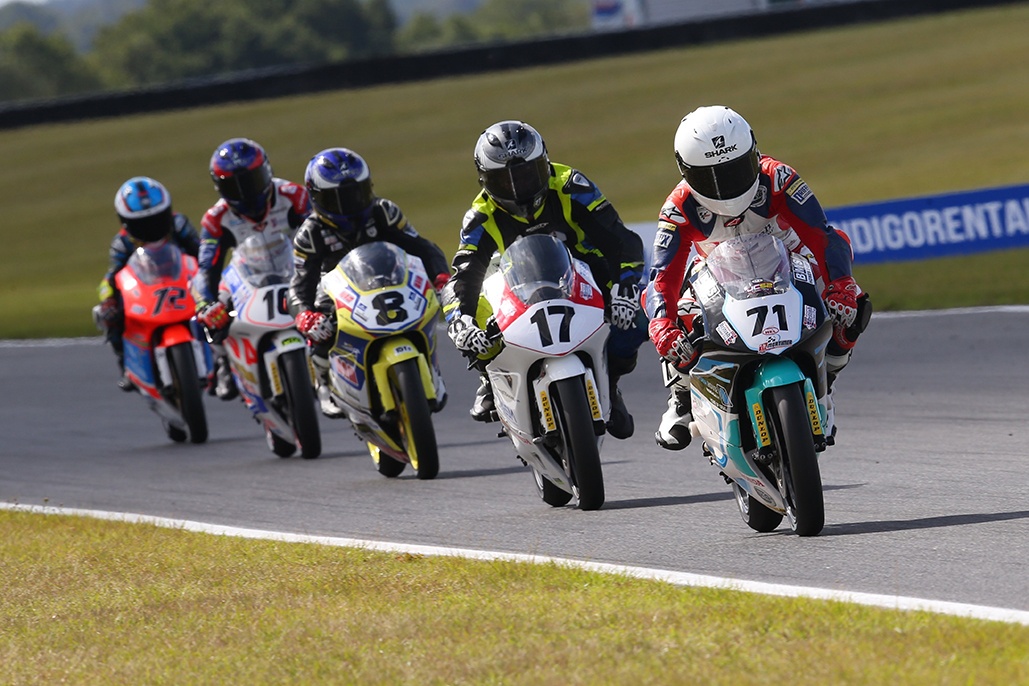 Someone will leave the classic venue with the 2020 crown. Who will it be? There are five contenders…

After four stunning rounds of racing, the time has come for the 2020 Honda British Talent Cup finale. The legendary Brands Hatch plays host and there’s everything on the line, with five riders in with a shout at the crown and another 50 points on the table over two 14-lap races. Who will it be? Let’s start at the top…

On the way in, that’s Eddie O’Shea (WAM). The number 8 arrives ahead in the standings courtesy of his unrivalled consistency, having finished every race in the top five and most on the podium. The points leader now for some time, the position is a strong one but the gap is now just four points – so it’s full attack despite being top of the pile. It’ll be full attack for a separate reason too, with O’Shea the only rider in contention to have not yet won a race. He’s come incredibly close though, so even a tiny change in the shuffle of the pack could have seen him take to the top step. He was also on full attack mode at Donington Park last time out; a man on a serious mission.

Next up is Charlie Farrer (Victoria House Academy/Mortimer Racing). He’s won two races and only once finished off the podium – in fourth – but he’s also not finished once after a DNF early on in Round 1. That leaves him the man four points down on the lead, and his incentive is a serious one as this is the 18-year-old’s last shot at the crown. Can he do it? He arrives as the most recent winner, and he’s scored the most points over the last four races… so Farrer is the man with the momentum.

In third is the earlier points leader, Franco Bourne (Franco Bourne/SP125 Racing). After starting the season with a second place and two wins, a DNF at Snetterton then dented his charge somewhat – and he’s not been back on the box since. Having said that, he’s fought to be and the number 17 remains a constant threat at the front. Now it’s become a now or never as he’s fifteen points down, can he find some more pace with everything on the line?

Casey O’Gorman (Microlise Cresswell Racing), meanwhile, lurks in fourth. The number 72 had a curious first half of the season switching between domination and DNF, but he’s now had a win, a fourth and a podium in the last three races to iron out that inconsistency and pull himself to within 27 points of the top. That sounds a lot, but it’s only just over half what’s on offer this weekend and there have been longer shots that have seen riders take a crown or two before. He has less to lose too, knowing only some serious gains will do.

That’s also true of the last man in with a shout, according to the maths: Harvey Claridge (City Lifting/SP125 Racing). Claridge was off like a shot in the lead last time out before crashing, and that contributed to the 29-point deficit he now has to O’Shea at the top. It ain’t over till it’s over, but Claridge will need to beat all his rivals with some resounding wins – and hope chaos reigns behind him. He has already won this year though, and knows he can.

It won’t be a five-rider race though. One of those looking to complicate life for the frontrunners will likely be Evan Belford (City Lifting by RS Racing), with the number 52 turning flashes of impressive speed in 2020 into his first podium last time out, and in some style. Every rider fighting at the front who isn’t up for the crown is a serious complication for those trying to take it – and the likes of Belford could play a serious role.

There’s a lot at stake in the tightly-packed group just behind the number 52 in the standings, too. Corey Tinker (Stauff Fluid Power Academy) is on 58 points in seventh, Elliott Dufton (D&D Racing) on 57 – along with Ryan Hitchcock (Wilson Racing) – and James Cook (Wilson Racing) is on 56. Harrison Crosby (Banks Racing) is 11th overall and only a point behind Cook too, so the difference between a top six finish overall and ending up outside the top ten is almost nothing. All have shown good form this season, many in or around the top five or six, and Brands Hatch is a whole new challenge…