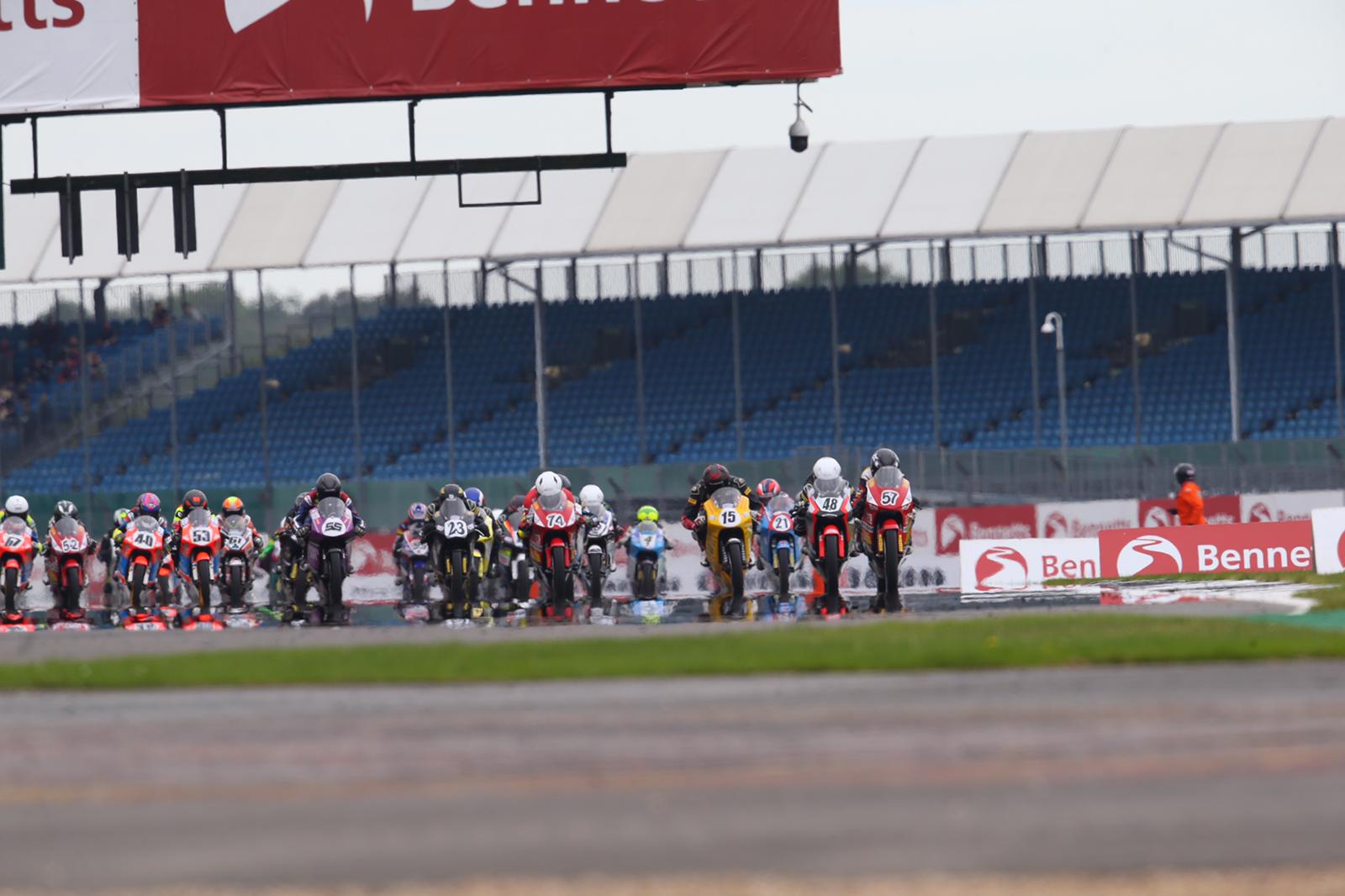 The number 74 wins and takes the points lead after Race 2, but some comeback kings steal a few headlines after a classic freight train battle at Silverstone.

Sunday saw Silverstone host another classic Honda British Talent Cup battle, with Carter Brown (City Lifting by RS Racing) coming out on top this time around – and taking the points lead with it. He struck late to take it and Jamie Lyons (C&M Motors Ltd / Tooltec Racing) followed him through to get back on the box at Silverstone, with the podium completed by Johnny Garness (City Lifting by RS Racing).

There was some drama from the off or rather before it for Race 1 podium finisher Sullivan Mounsey (iForce Lloyd & Jones), with problems on the grid forcing the number 4 to start from the very back of the grid. And after their drama on Saturday, both Casey O’Gorman (Microlise Cresswell Racing) and Evan Belford (City Lifting by RS Racing) were down in P18 and P20 for take two, making it quite a proposition for the duo heading in at the top of the standings as well.

At lights out it was Garness who got the best start, not from pole this time around but the number 57 still taking the holeshot in 57 style. Race 1 winner Ollie Walker (Moto Rapido / SP125 Racing) slotted into second with Brown in third, but it was a big group from the off as the three were joined by Lyons, Harrison Crosby (Banks Racing), Rhys Stephenson (Rocket Racing) and James Cook (Wilson Racing).

On comeback watch though, after only a handful of laps the three riders somewhat out of position had been absolutely storming through. By Lap 4, O’Gorman was at the head of the group chasing to catch the lead gaggle, up into eighth, and the 67 cut the gap quickly. Next it was the turn of Mounsey – up from 31st and the very back – as he led Belford and tucked in to push forward, both also managing to bridge that gap before long.

As the group gained three though, it started to lose one, with Cook beginning to fade by mid-race. However, the freight train fight for the lead was only hotting up, now nine-riders strong, with phase 1 of O’Gorman’s charge completed as he took over at the front.

Heading onto the final lap it was still the number 67 in the lead, with Brown threatening just behind and Lyons in third as Garness shadowed. And the key move came from Brown. The number 74 lined it up and made it stick, with that tiny door opening more than enough invitation for Lyons too. Both sliced past O’Gorman and crossed the line just ahead, but there was an extra kicker for the number 67 too: on the drag to the line, Garness managed to pip him by just 0.009.

The 25 points for the win put Brown on top as the number 74 bounces back after a ore contentious Saturday at Silverstone, with Lyons finding rostrum form again and Garness making his slipstream prowess work to perfection once again. From P18 on the grid though, a 14-place gain and still 11 points off the top of the table is a stunner from O’Gorman.

The battle for fifth was a couple of tenths further back by the line, but it was won by Mounsey as he gained a whopping 26 places. O’Gorman impressed from P18 to thousandths off the podium, but Mounsey, who has one podium and had a second best result this season season of fourth, stormed to fifth position from the very back of the grid – not only taking one of his biggest points hauls of the year, but keeping his head when pressure came knocking.

Crosby was a tenth and a half further back, with Stephenson’s impressive Sunday seeing him take P7, denied by just 0.047. In the end, Belford put together an impressive comeback from P20 but lost out in the group, taking P8 and losing the points lead to Brown. Walker completed the freight train, with Cook a bit further back and the number 34 completing the top ten.

Another day, another rollercoaster, and another shake-up. Sunday sees Brown head into the finale as the points leader, with six in hand over Belford, but O’Gorman is now only five further back too. Garness and Lyons remain in mathematical contention too. Who’ll take the crown in 2021? We’ll find out next time out as Donington Park Grand Prix layout puts the Honda British Talent Cup on the line in a few short weeks!