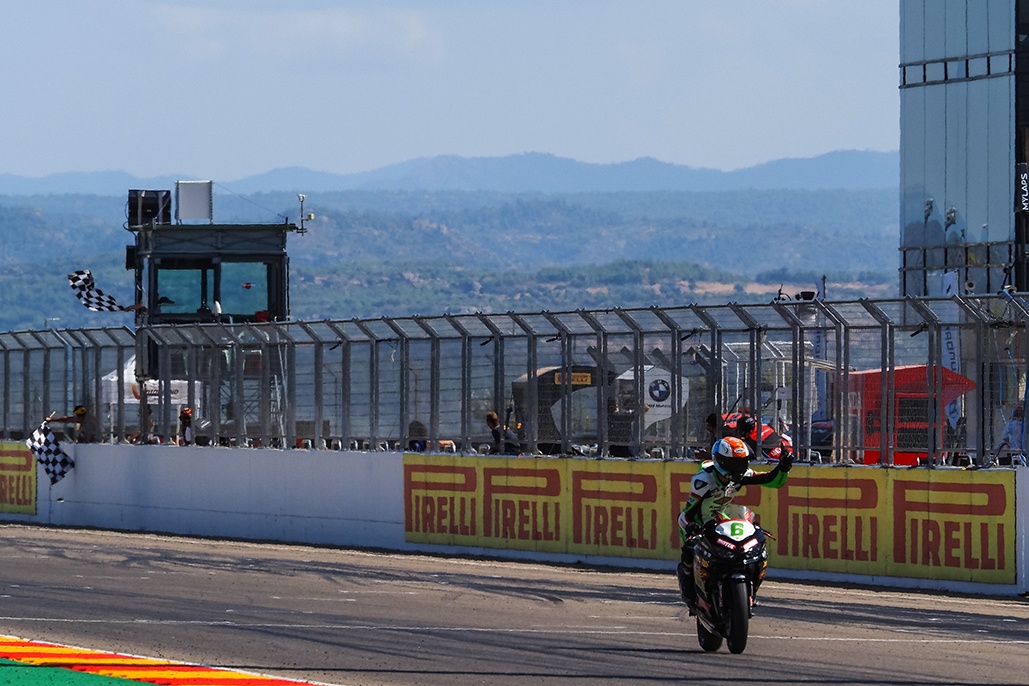 Jeffrey Buis wins his third race out of the last four races at MotorLand Aragon with his fourth consecutive podium.

FIM Supersport 300 World Championship had a thrilling Race 2 at MotorLand Aragon for the Pirelli Teruel Round but it was won by Jeffrey Buis (MTM Kawasaki MOTOPORT) in dominant fashion with the Dutch rider taking the lead in the early stages of the race before breaking away from the group to take his third win in four races.

Buis has now finished on the podium in four consecutive races and has extended his Championship lead as he takes an 11-point lead into the latter stages of the season; Buis winning Race 2 by more than six seconds to take maximum points once again. Buis finished ahead of his teammate Scott Deroue (MTM Kawasaki MOTOPORT) as Deroue claimed another podium finish in 2020, ahead of Turkish rider Bahattin Sofuoglu (Biblion Motoxracing Yamaha WorldSSP300) who completed the podium.

2018 Champion Ana Carrasco (Kawasaki Provec WorldSSP300) finished the race in 22nd place after a couple of errors in the race; one coming while Carrasco was running in the group for second place and another while fighting back. Kim Aloisi (ProGP Racing) did not take the start after a technical issue while Yuta Okaya (MTM Kawasaki MOTOPORT) did not finish the race, also with a technical issue, and Tom Bramich (Carl Cox-RT Motorsports by SKM-Kawasaki) crashed out of the race on the opening lap.

P1 Jeffrey Buis (MTM Kawasaki MOTOPORT)
“I’m very happy. At the beginning of the race, I was able to make a gap and I built on that. I was able to set my own pace and that was good. I want to thank my team and family and everybody who supports me.”

P2 Scott Deroue (MTM Kawasaki MOTOPORT)
“It was a very difficult race, to be honest. My first lap was not good, and it was very difficult to pass the riders. Everyone was very aggressive, so it was very difficult to overtake. My teammate was gone so it was quite disappointing but congratulations to him because he did an amazing job today. On the last lap, my other teammate, Koen, thought the finish flag was there but it wasn’t, and I was leading the group and that was not really my plan. At the last corner I was lucky to finish because some guys made a mistake and I overtook them again.”