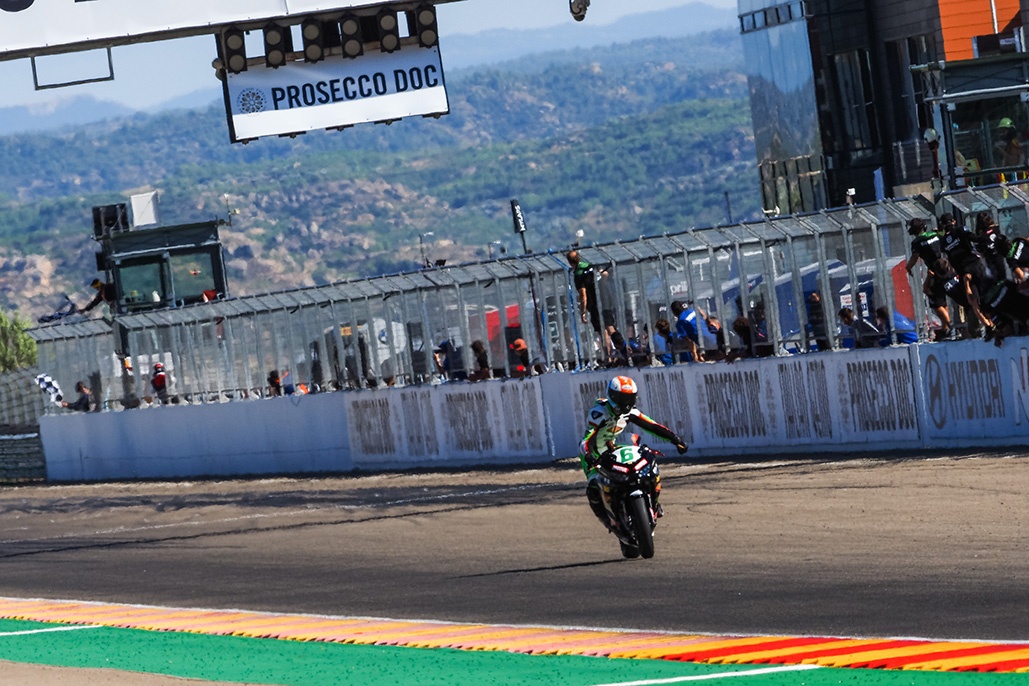 In a race full of thrills and spills in FIM Supersport 300 World Championship, it was Jeffrey Buis (MTM Kawasaki MOTOPORT) who claimed victory by almost seven seconds the second largest margin of victory in WorldSSP300 history and the largest at MotorLand Aragon. While Buis was able to dominate out in front, there was a titanic battle for the podium with four riders separated by just four tenths.

Buis pulled away from the lead group after starting from pole position and completed the 10-lap race unchallenged as he claimed his first victory in dominant fashion; the second largest victory margin of all time. He finished ahead of Ana Carrasco (Kawasaki Provec WorldSSP300) who moved into the Championship with another podium finish as well as Scott Deroue (MTM Kawasaki MOTOPORT) not finished the race after a late-race clash with Hugo de Cancellis (Team TRASIMENO). Mika Perez (Prodina Ircos Team WorldSSP300) finished in third placed; the Spaniard claiming his first podium since Magny-Cours in 2018.

De Cancellis finished the race in fourth place despite the late-race collision with Deroue; the Frenchman able to continue and secure a strong result ahead of Tom Booth-Amos (RT Motorsports by SKM Kawasaki) in fifth. It is the first time this season that Booth-Amos has not finished on the podium when he has finished the race, having scored three podiums and a retirement prior to the Prosecco DOC Aragon Round. Unai Orradre (Yamaha MS Racing) completed the top six after he fought his back from the back of the grid having been forced to start at the back of the grid with a tyre pressure infringement.

P1 Jeffrey Buis (MTM Kawasaki MOTOPORT)
“The race was very difficult. At the beginning, I tried to make a gap but there was a lot of wind. They showed me the pit board and the gap was big enough, so it was okay for me.”

P2 Ana Carrasco (Kawasaki Provec WorldSSP300)
“The race was really difficult. In Tissot Superpole, I made some mistakes and we had to start towards the back, so it was difficult to fight at the front. With the wind it was really hard. I was trying to pull away from the group, but it was impossible. Jeffrey was very, very fast so he won but I’m very happy to be back on the podium. It was not easy, so it’s a good result for us. We have to focus on tomorrow’s race as it’ll be important to be back on the podium.”

P3 Mike Perez (Prodina Ircos Team WorldSSP300)
“I’m really happy. After one and a half years without a podium, it’s nice to be back! It was a good fight with the whole group. I am so happy and want to thank my team, my sponsors and all the people who trusted me after last season as this is for them.”