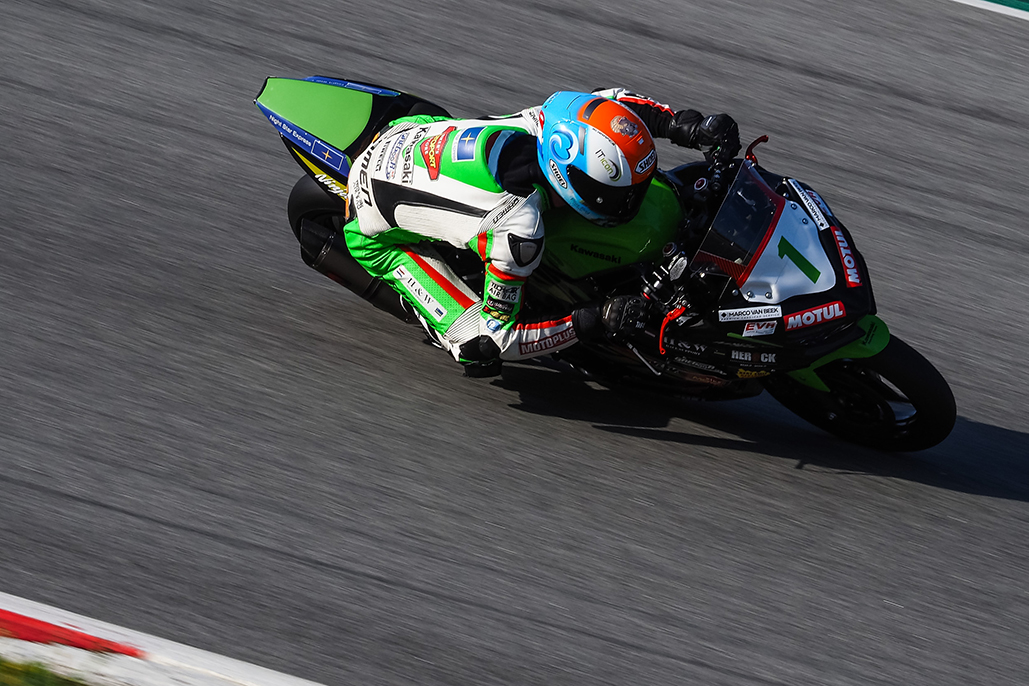 Reigning Champion Jeffrey Buis was fastest of everyone on the final day of the Catalunya Test as the Dutchman looks to retain his title.

The two-day test for the FIM Supersport 300 World Championship has come to a close after two days of thrilling action, with reigning Champion Jeffrey Buis (MTM Kawasaki) ending the second day fastest after his time in the morning was good enough to top the combined classification ahead of new teammate Adrian Huertas.

The duo had finished first and second in the morning two-hour session and both times were good enough to hold on to those places following the afternoon session. They were the two MTM Kawasaki riders on Tuesday as Koen Meuffels did not take part on the second day following a crash he had on the opening day of action.

Samuel di Sora’s (Leader Team Flembbo) impressive test continued with third place overall for the day and a time good enough to be fastest in the afternoon session, which appeared to be a bit slower than the morning session. Teammate Sylvain Markarian also had a strong test, finishing the day in 12th

Turkish rider Bahattin Sofuoglu (Biblion Yamaha Motoxracing) finished third for the day after a late lap in the afternoon session moved him into third while teammate Margo Gaggi was 20th as he continued to get used to his new surroundings. Ton Kawakami’s (AD78 Team Brasil by MS Racing) strong test continued with fifth place on the second day, finishing two places below his position from the first day. Teammate and brother Meikon was seventh place as the duo showed the form they had on occasion throughout 2020. From the same stable of riders, MS Racing’s Unai Orradre was 11th with teammate Miguel Santiago Duarte in 40th.

Victor Rodriguez Nuñez (Accolade Smrz Racing) was another rider who had a strong test with sixth overall as another rider who is adapting to new surroundings, while teammate Jose Luis Perez Gonzalez was close to his teammate but unable to overhaul him. Machado CAME SBK’s Vicente Perez Selfa secured a top ten finish for the day with his two teammates, Bruno Ieraci and Ruben Bijman further down the order; Bijman one of two riders who created a late Red Flag that curtailed the session.

Italian rider Gabriele Mastroluca (ProGP Racing) had an eventful test with two crashes across the two days, but he recovered to secure a top ten finish on day two with eighth place while teammate Fillipo Palazzi also had his own incident in the afternoon session in the middle part of the lap, and being unable to set a lap time to move himself up the order.

New outfit Viñales Racing Team secured a top 15 finish in the standings with Dean Berta Viñales, the youngest rider of the Viñales family, finished 12th for the day. Victor Steeman (Freudenberg KTM WorldSSP Team) had another strong day of testing with 13th overall for the day as the sole KTM representative on the grid in 2021.

Harry Khouri (Fusport – RT Motorsports by SKM Kawasaki) brought out the only Red Flag of the morning session when he crashed at Turn 5, a left-hand hairpin corner which descends on exit, joining Ana Carrasco (Kawasaki Provec WorldSSP300) and Unai Orradre (Yamaha MS Racing) in crashing at the same corner. James McManus (Team# 109 Kawasaki) came off his bike at the right-hander of Turn 9 with around 30 minutes left in the morning session. The session came to a premature finish when Red Flags were shown for separate incidents for Bruno Ieraci (Machado Came SBK) and Alejandro Diez (Kawasaki GP Project). In the afternoon, Inigo Iglesias (SMW Racing) came to a halt in the first part of the lap, with the Red Flags shown and the session coming to an end early.