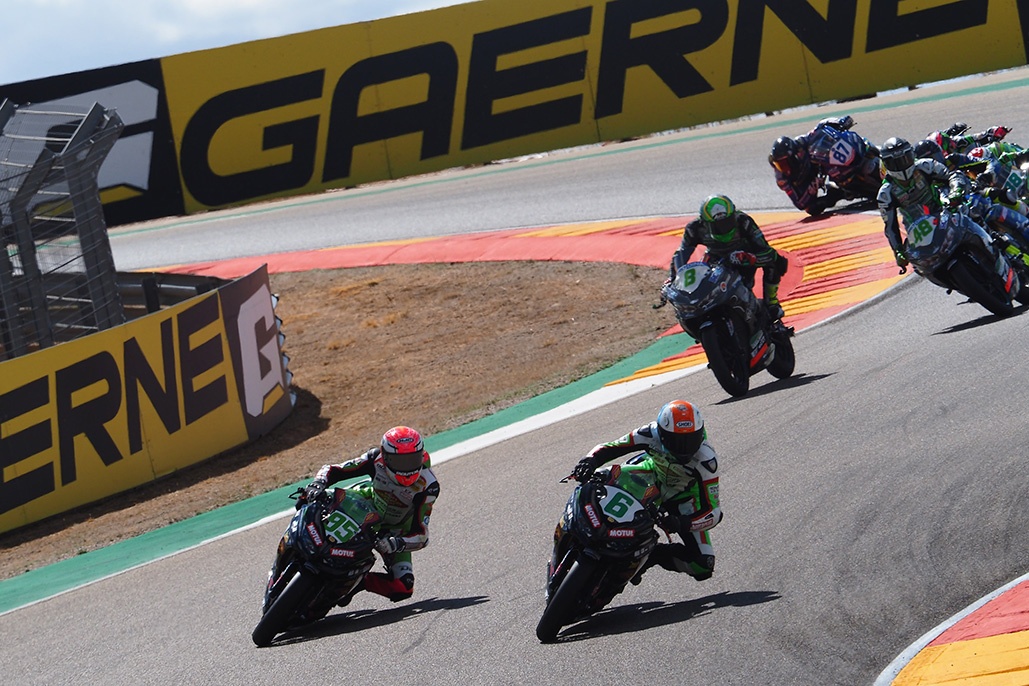 Dutchman Jeffrey Buis makes it two from two at MotorLand Aragon after a stunning overtake on the final lap in Race 2.

A weekend of action in FIM Supersport World Championship finished with a sensational overtake by Jeffrey Buis (MTM Kawasaki MOTOPORT) meant he claimed his second win at MotorLand Aragon in as many days, with the polesitter leading for most of the race but a sweeping move around the final two corners to take race victory and the Championship lead; with just eight points separating the top four riders.

Buis had started from pole position and looked to try to break away to repeat yesterday’s dominant victory, but Buis was kept in sight by his rivals. On the penultimate lap, Buis found himself without the lead of the race and took a normal racing line into Turn 1, allowing him to keep maximum speed through the corner without the benefit of the slipstream. It paid dividends for Buis as he was able to take the lead again before teammate Scott Deroue (MTM Kawasaki MOTOPORT) passed him on the last lap.

Deroue had the lead going into the long back straight and Buis used the slipstream effect to keep himself in contention before sweeping around the outside of Turns 17 and 18 and launching himself off the final corner to claim a sensational victory following the stunning overtake. Thomas Brianti (Prodina Ircos Team WorldSSP300) claimed his first podium of 2020 with second place, holding off Deroue who finished third.

Unai Orradre (Yamaha MS Racing) finished in fourth place while featuring in the pack for the lead with Meikon Kawakami (Team Brasil AD 78) finishing in fifth; the Brazilian able to keep in contention after starting from the front row. 2018 Champion Ana Carrasco (Kawasaki Provec WorldSSP300) finished in sixth place; the top six riders separated by less than a second.

Yuta Okaya (MTM Kawasaki MOTOPORT) was the first retirement of the race after a crash on the opening lap of the race while Johan Gimbert (GP Project) also retired in the early stages of the race alongside Oscar Nunez Roldan (Scuderia Maranga Racing), Tom Edwards (Kawasaki ParkinGO Team) and Adrian Huertas (ProGP Racing). Tom Booth-Amos (RT Motorsports by SKM – Kawasaki) and Bahattin Sofuoglu (Biblion Motoxracing Yamaha WorldSSP300) suffered a crash which forced them both to retire.

P1 Jeffrey Buis (MTM Kawasaki MOTOPORT)
“At the beginning of the race I thought I could make a gap, but my pitboard says 0.0. I thought it was going to be a big group. The last lap was a little bit crazy!”

P2 Thomas Brianti (Prodina Ircos Team WorldSSP300)
“I’m very happy with my first podium in WorldSSP300. Thank you to all my team, my sponsors, my family thanks to everyone.”

P3 Scott Deroue (MTM Kawasaki MOTOPORT)
“I had a good start and the first laps were good. I was chasing my teammate Jeffrey and he had really good pace. He’s so fast here. I was really pushing to stay with him. I thought that after some laps we may have had a gap, because Jeffrey yesterday had a gap, but when I looked behind there was a big group. They overtook me, I was back to fifth, so I had to go to the back of Jeffrey again. It was really hard, but it worked, and I’m happy with third.”