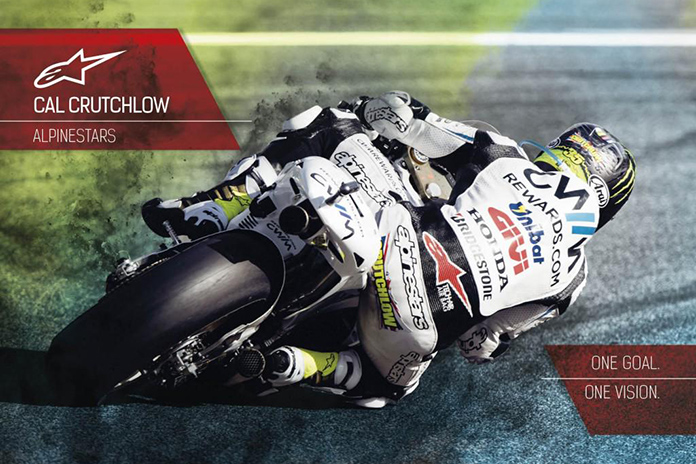 Taking time out of busy preparations for his home grand prix at Silverstone, the LCR Honda rider will appear at the West Sussex store from 6pm onwards. There he will meet and greet fans, recount his racing experiences in the premier class and talk about the Alpinestars performance products that protect him every race.

Coventry-born Cal is one of Britain’s most successful riders, with a string of podiums since stepping up to MotoGP in 2011. The Former Yamaha Tech 3 and Ducati Team rider is in his first season with the Honda satellite team and has already clinched a podium at the Argentina MotoGP.

The world’s leading motorsports footwear, protection and apparel company, Alpinestars’ ‘Race Experience’ event is designed to showcase its cutting-edge technology developed in MotoGP and World Superbikes which ensures the performance for Alpinestars’ customers on track and street.

P&H is one of the biggest and most exciting motorbike destinations in the South of England. They represent six of the world’s biggest bike manufacturers and their clothing department stocks an extensive range of motorcycle clothing, including world-class brands used by Cal, such as Alpinestars and Arai.

CAL CRUTCHLOW BIO
Date of birth: 29. October. 1985 Place of birth: Coventry
Cal Crutchlow is a former UK Junior Challenge champion and winner of the British Supersport Championship in 2006. He made his debut in British Superbikes the following year and in 2009 took the World Supersport title. Cal debuted for the Monster Yamaha Tech 3 team in MotoGP in 2011 and lifted the Rookie of the Year title in the same year. Cal remained with the Tech3 team for 2012, scoring his first MotoGP podium at Brno. In 2013 he scored two poles and four rostrums before joining Ducati for 2014. A year later he joined LCR Honda.