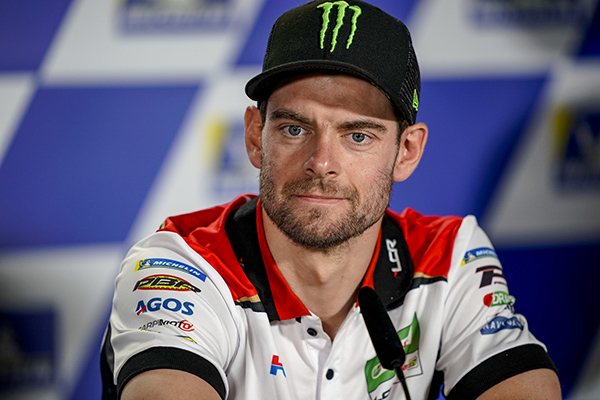 Yamaha Motor Co., Ltd. and Yamaha Motor Racing are delighted to welcome Cal Crutchlow back to the Yamaha family. The popular MotoGP star will join the Yamaha Factory Racing Test Team programme taking on the role of Official MotoGP Test Rider for the 2021 season.

Yamaha Motor Co., Ltd. and Yamaha Motor Racing are delighted to announce that experienced and successful MotoGP-rider Cal Crutchlow will be reinforcing the Yamaha Factory Racing Test Team for the 2021 season.

Starting from the MotoGP shakedown test, scheduled in Sepang, Malaysia from 14th – 16th February, Crutchlow will ride the YZR-M1. He will also take part in Official IRTA Tests and other private Yamaha tests, with the aim to help Yamaha‘s engineers with the MotoGP development programme. Crutchlow‘s 10 years of experience in MotoGP, riding for three different manufacturers, make him the ideal rider for the job.

A Wild Card appearance is possible if deemed beneficial to the testing programme, and Crutchlow has also confirmed his availability for selection as replacement rider in the unfortunate case where one of Yamaha‘s MotoGP riders might be forced to miss a Grand Prix through illness or injury.

Crutchlow and Yamaha go a long way back. The Briton famously won the 2009 World Supersport Championship (WorldSSP) with Yamaha. He then moved up to the World Superbike Championship (WorldSBK) the following year and scored ten podiums, including three wins, to finish fifth in the overall standings. This success opened up an opportunity to make his MotoGP debut in 2011 with Yamaha‘s satellite team at the time, Monster Energy Yamaha Tech3, where he gained experience for the first three years of his now ten-year-long MotoGP career.

Yamaha Motor Co., Ltd. and Yamaha Motor Racing wish to sincerely thank 2020 Yamaha Factory Racing Test Rider Jorge Lorenzo for his availability, support, and understanding during this Covid-19 impeded year. Though external circumstances held this partnership back from realising their mutual objectives for 2020, the respect between the two parties remains unchanged. Yamaha wishes Jorge all the best in his future endeavours.

LIN JARVIS
MANAGING DIRECTOR, YAMAHA MOTOR RACING
Well, first and foremost I would like to say ‘welcome back’ to Cal.

I still remember Cal‘s first visit to YMR many years ago as fresh World Supersport Champion and recall he expressed his desire to move onwards and upwards to MotoGP in the future. After the initial move to Superbikes, he then spent three seasons with us in the Monster Energy Yamaha Tech3 team before moving on to gain a further seven years of experience with two of our main competitors. This wealth of experience, coupled with Cal‘s honest no-nonsense approach, will surely benefit us greatly as we strive to improve our YZR-M1 bikes with a full testing programme next year.

Of course, we had planned and hoped for a strong programme this year with Jorge. Unfortunately, our Factory Test Team soon had to put their plans on hold as the Covid-19 pandemic started and continued to influence 2020 from March onwards. It‘s regrettable that we have not been able to carry out our testing programme and realize our goals. We wish Jorge all the best in his future endeavours, and we thank him for his many years of collaboration with Yamaha.

Cal Crutchlow made his debut in the MotoGP premier class in 2011 after a successful WorldSBK season in 2010 and a WorldSSP title in 2009. He earned the MotoGP Rookie of the Year Title with Monster Yamaha Tech 3, taking 12th place in the overall rankings.

From 2014 to 2017 Crutchlow gained lots of experience. His greatest glory came in 2016 as he rode to victory in the wet in Brno – the first British MotoGP winner in 35 years – and then followed it up with another win at Phillip Island, in the dry, that same year. He also won the Argentina GP in 2018.

Thanks to his 10 years in the premier class, Crutchlow became a staple in the MotoGP community, known and loved for his hard riding and no-nonsense character.